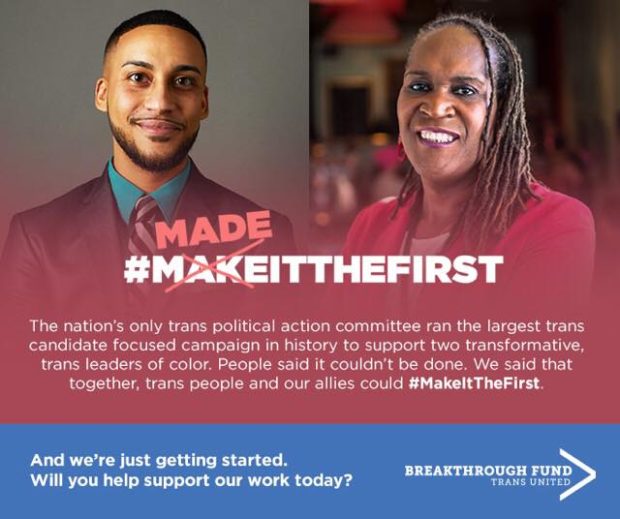 Andrea Jenkins and Phillipe Cuningham won their bids for Minneapolis City Council on Tuesday, making them the first two transgender people of color elected to a major city’s governing body.

Jenkins won the seat occupied by Elizabeth Glidden. Jenkins worked for Glidden as a policy aide and has been a leader on transgender issues at City Hall, as a poet, and as the head of the University of Minnesota’s Transgender Oral History Project. Ward 8 which spans south central Minneapolis. Jenkins won the seat with over 70 percent of the vote.

In a close race, Cunningham defeated longtime city council member Barb Johnson. Cunningham has worked as a policy aide to Minneapolis Mayor Betsy Hodges where he worked on racial equity, youth, education, and LGBTQ equity. Prior to that he was a special education teacher and youth worker. Ward 4 is on Minneapolis’ north side. Cunningham won in the second round of tabulations after coming just behind Johnson on election night. Second choice votes put Cunningham over the 50 percent threshold to win.

As Jenkins said in her speech to supporters after her victory was announced, “As an out African American trans-identified woman, I know first-hand the feeling of being marginalized, left out, thrown under the bus. Those days are over. We don’t just want a seat at the table—we want to set the table. At a time in our history when the federal government is undermining the progress that has been made in women’s rights, access to health care, immigrant rights, disability rights, LGBT rights, we must stand up and fight back. Cities are the frontline of defense in these efforts, and I am proud to do this work.”

I’m proud to say I will be serving on a City Council that is 15% qualified Black queer transgender leaders. This quite a historic feat for Minneapolis. I am so grateful for Andrea Jenkins – I am a direct product of her transgender equity work at City Hall. Now, she and I are the first trans people elected to sit on a City Council for a major US city. I can’t believe I now have the honor of calling her my colleague on Minneapolis City Council.
As of today, I am the first transgender man of color ever elected to office in the US and the first transgender man period to ever be elected to a City Council of a major US city. I am also the first person of color to represent the 4th Ward.
Whenever I remember this, I get choked up for a second because it’s just a reminder to me how my ancestors and elders fought so long and so hard for me to be here. Then, I remember there will never be another generation born in this country where Black flamboyant boys, butch girls (with whom I will always share a kinship), and transmasculine boys won’t have an example that even the honor being elected as representatives of our communities is possible for them. I have so much work ahead of me, but I carry my responsibility to those who will follow behind me right alongside my responsibility to my community in the 4th Ward.

Both campaigns were supported by Trans United Fund’s Breakthrough Fund which also helped elect Danica Roem to the Virginia legislature, and campaigned for Kristen Browde in New York who did not win her race. Also elected on Tuesday were Lisa Middleton who will now serve on the Palm Springs City Council in California, Tyler Titus who will serve on the Erie School Board in Pennsylvania, Stephe Koontz who was elected to the Doraville City Council just northeast of Atlanta, Georgia, Gerri Cannon who won a seat on the Somersworth School Board in New Hampshire, and Raven Matherne who won a seat on the Stamford Board of Representatives in Connecticut.