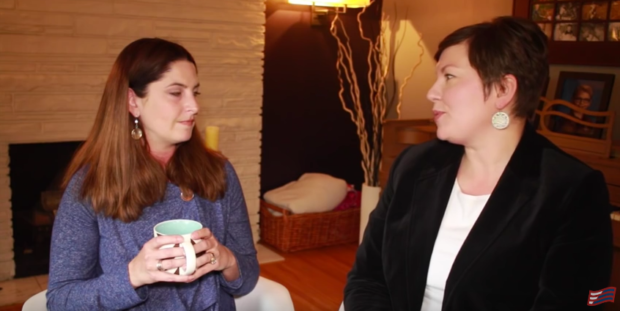 Minnesotans are the face of a new campaign by a national network of anti-LGBTQ organizations. The campaign, #askmefirst, features Christians imploring schools, businesses, and “transgender activists” to ask them for permission before allowing transgender people to use the bathroom.

A video released with the campaign’s launch last week features Emily and Jamie. The video doesn’t say where the duo are from. Their story is about a school that didn’t “ask them first” before making steps to be inclusive of transgender and gender nonconforming youth. The two parents formerly had children at Nova Classical Academy in St. Paul and were outspoken critics of what they call “gender confusion.” Both appeared at a press conference earlier this year with Republican Rep. Glenn Gruenhagen and spoke in support of barring transgender people from using the bathroom.

In the video released last week, they spoke of a “gender confused student.” Emily said, “This is a battle for our children’s innocence… It’s a battle that I think is worth fighting and I will continue it for other people’s children.”

The Ask Me First campaign was developed by the Family Policy Alliance — formerly called Citizenlink — which provides a network of financial and political assistance for Family Policy Councils throughout the United States including the Minnesota Family Council.

The latter sent out an email last week stating:

Ask Me First provides women an opportunity to share their real life stories in the hope that other women and families nationwide will have courage to speak up for common sense safety and privacy policies – in public school restrooms, locker rooms, housing, government buildings, on sports teams, etc.

Their stories are also meant to send clear messages to school administrators and legislators that there are serious consequences for moms, daughters, students, athletes, sexual abuse survivors and businesswomen when men are allowed to access women’s private facilities!

In the video, Emily spoke about how they brought in the anti-LGBTQ Minnesota Family Council to speak at the school. “We ran a little fundraiser. We got the funds together and we rented the gym at the school and brought in a speaker from our state’s own family council. It was great.”

Jamie added, “It was great. That was an event that was — I call it the labor of love because it was a labor of love.”

Emily wrapped up the video saying, “We made sure to contact various christian legal groups either locally or nationally and ask for their advice… we have our gut feeling we have the truth the Lord shares with us and we have the courts on our side we can be bold in fighting this.”

Together they both said, “Ask us first!”