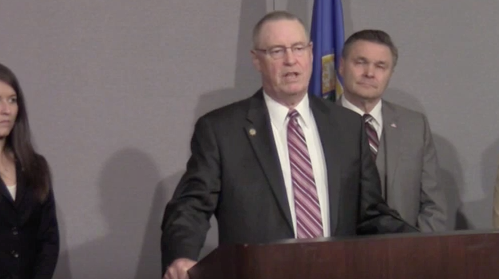 “The transgender community, as it applies to this bill — they are not the bullied. They are the bullies,” Sen. Scott Newman, a Republican from Hutchinson, told reporters at a press conference on Wednesday.

Newman is the chief author of SF3002, a bill that targets Minnesota’s longstanding ban on discrimination based on gender identity, enacted in 1993. It would block gender-inclusive policies at school districts and local municipalities and force transgender people to use a restroom that does not correspond to their gender — putting many transgender people at risk for discrimination and violence, according to research at UCLA’s Williams Institute.

Newman complained at Wednesday’s press conference that he’s become a target of anger by transgender Minnesotans and allies.

“I am hearing from the transgender community that strongly oppose it and I will tell you that I would estimate on about 10 to 1 the emails and phone calls coming out of the transgender community are coarse, they are threatening, they’re crude. And I will tell you that all that does for me is to strengthen my resolve that I’m going to protect my constituents.”

The press conference was organized by Newman and Rep. Glenn Gruenhagen, a Republican from Glencoe who authored the House version of the bill. Also speaking were two representatives of the anti-LGBTQ Minnesota Child Protection League — Barb Anderson and Julie Quist. Several parents from Nova Classical Academy, a public charter school that recently enacted gender-inclusive policies, also spoke in support of the bill. A resident of the New London-Spicer school district, which is considering gender-inclusive policies, spoke to reporters as well.

Here’s full video of the press conference via the Minnesota House DFL: