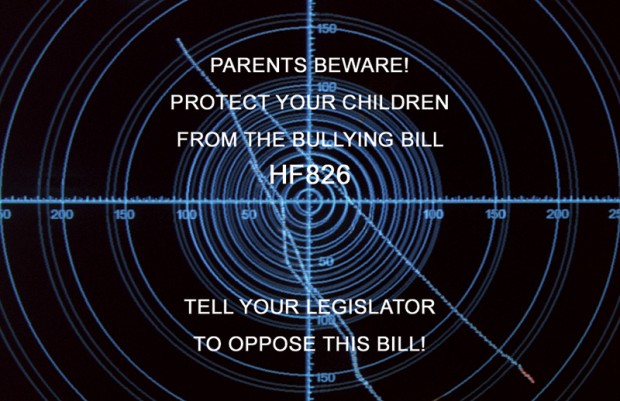 A group of veteran religious right and tea party activists have come together to oppose the Safe and Supportive Schools Act, also called the anti-bullying bill. The Minnesota Child Protection League is touring state tea parties and religious groups with presentations that contain factual inaccuracies and promote false stereotypes about the LGBT community.

MCPL’s lead spokesperson is Barb Anderson, a ubiquitous figure in the school bullying debate. Anderson has long volunteered as a researcher for the Minnesota Family Council, which led two failed battles against marriage equality. She was also a vocal opponent of LGBT safety in the Anoka-Hennepin School District where she helped launch the Parents Action League. PAL is listed as a hate group by the Southern Poverty Law Center because of its adamant demands to have the ex-gay movement in the Anoka-Hennepin School District.

Anderson has made some extreme statements about LGBT people, so much so that GLAAD has added her to its Commentator Accountability Project.

For example, she once said, “The greatest threat to our freedom and the health and well-being of our children is from this radical homosexual agenda that is just so pervasive.”

Renee Doyle has been part of the movement from the beginning. Doyle, along with Michele Bachmann and several others, founded the Maple River Education Coalition in the early 2000s. That morphed into Edwatch in the mid-2000s and today is called Education Liberty Watch.

The group has long advocated against the inclusion of safety programs for LGBT youth. For exemple, the group criticized Gov. Tim Pawlenty in 2006 for “promotion of homosexual agenda” after his commissioner of education included a link to OutFront Minnesota on the department’s website.

“Homosexual advocacy groups are being funded by grants from the state Department of Health under his authority,” wrote EdWatch in a letter about Pawlenty. “Additionally, under Governor Pawlenty’s supervision, his administration is actively promoting the indoctrination of students into a homosexual worldview and value system.”

Other members of Edwatch are also part of MCPL.

Julie Quist, a former Bachmann staffer and wife of failed (and homophobic) candidate for congress Allen Quist, proudly lists her membership on the MCPL board on her LinkedIn profile.

Republican activist Marjorie Holsten is also a board member and registered MCPL with the Minnesota Secretary of State in August.

She’s also a Senior Sales Director with Mary Kay Cosmetics, She also recently moved back to Minnesota after living in Colorado Springs for a number of years.

Earlier this year when the British Parlaiment voted to approve marriage equality, Anderson posted a comment to an article using her Facebook page:

“I just pray that God will be merciful. I do not understand. God is NOT homosexual and he talks about how dangerous this life style is for our eternal souls. (1 Corithians 6:9-11) God created us Man and Women. Does this not express his “good” creation. No civilization has been able to survive this decision. It will be a rapid decline. We turn away from Him even though we know we do not make our own hearts beat, nor our own lungs breathe.”

Please check out the MN Child Protection league a non profit fighting for children’s rights and parents rights. Anoka county has already started using lewd materials to children. Schools in Minnesota are except the Obscenity laws! Who voted for that? Yes the very people we trust our children to are exempt any obscene acts they want. Already taking place I. Anoka County. Call your representative and tell them to vote “NO” on the “safe and supportive” school bill it isn’t safe AT ALL!

Former South Washington County school board candidate Susan Richardson has been presenting MCPL’s message at the South Metro Tea Party. She ran, in part, on an “anti” anti-bullying platform.