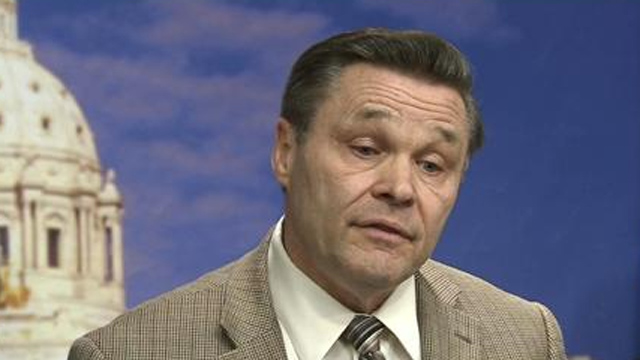 In an interview with WCCO’s Chad Hartman on Thursday, Rep. Glenn Gruenhagen, a Republican from Glencoe, reiterated his stance that homosexuality is an “unhealthy sexual addiction.” The assertion was part of a broader conversation about Gruenhagen’s anti-LGBTQ legislation at the Capitol.

Chad Hartman: I would say this sir, I think you are genuine in what you want [but] I don’t think a lot of these people want the help you are offering. I would say this you have talked about the issue of sexuality and have caused plenty of criticism. I just want to ask you if you still stand by what you said a few years ago that homosexuality is unhealthy sexual addiction. Do you still stand by that?

Rep. Glenn Gruenhagen: Yes I do, and I know — I have friends who are homosexual, and I have friends who are former homosexuals, okay? So it is uh — you know the CDC — the Centers for Disease Control — which is not a right-wing organization, I think we can all agree on that — recently came out with the report that we have between 65 and 100 million Americans that have an STD. 65 to 100 million. We’re approaching one third of our population has an STD.

Gruenhagen: This whole concept of promiscuity outside the bond of marriage is not working out real well, and people say, “Well, that’s a social issue.” Do you understand the billions and billions of dollars in health care costs those diseases brings?

Hartman: You are telling the millions of people in this country who are homosexual — and the rest of their lives are no different than me or yours — but that the reason they have described themselves as homosexual is because they have an unhealthy sexual addiction?

Gruenhagen: Yeah you can go on the internet and there’s treatment for sexual addictions right here in Minnesota, whether it’s pornography or unhealthy sexual behavior. You can receive treatment for that and be free from those compulsions.

Gruehagen made the claim that homosexuality is an “unhealthy sexual addiction” in 2013. The Minnesota Legislature was poised to pass marriage equality and Gruenhagen organized a press conference with “former homosexuals” to prove that sexual orientation can be changed through prayer and counseling.

Gruenhagen has been an outspoken opponent of equity for LGBTQ Minnesotans. He recently authored a bill that would ban transgender employees from using the restroom that is appropriate for their gender. In 2011, he co-founded the Pro-Family Forum, formerly the Pro-Marriage Amendment Forum, along with “former homosexual” Kevin Peterson (In 2013, Gruenhagen announced his “former homosexual” friend on the floor of the Minnesota House as that body was taking up marriage equality).

Here’s the audio of the exchange:


The Column is a community-supported non-profit news, arts, and media organization. We depend on community support to continue the work of solid LGBT-centric journalism. If you like this article, consider visiting Give MN to make a contribution today.