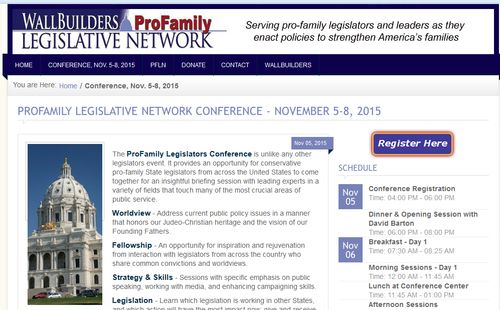 Although the conference is being held in Texas, Wallbuilders used an image of the Minnesota State Capitol building to illustrate the webpage for the event (screenshot above).

On her Facebook page Friday, Whelan posted that they were in Dallas: 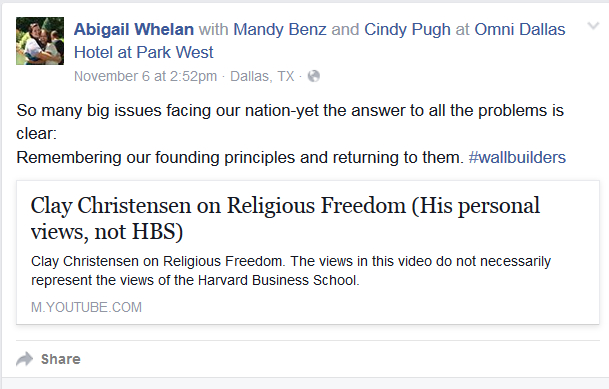 As we noted in SuperPACs, cartel politicians & climate change: what’s missing from Rafael Cruz’s Lake Elmo talk, Whelan attended a talk by Timothy Barton in October; the speaker is the son of Wallbuilders’ founder and Cruz “Keeping the Promise” SuperPACs coordinator David Barton. Timothy Barton was in the state for a week-long residency at the Legacy Christian Academy, which sponsored an evening talk by his father on October 5.

At the time of Timothy Barton’s visit to Minnesota, Pugh was out of state, but noted this weekend’s conference in a comment on a Facebook post by state representative Eric Lucero, R-Dayton. Lucero wrote:

One of the founders of the original Tea Party Patriot movement in Minnesota, Pugh replied:

Cindy Pugh Was with you in spirit!!! At a Women In Government legislative conference in SC. Hoping to see some – if not all of you & a bunch of our colleagues, too – at the Wall Builders Pro-Family Conference for Legislators next month!

So far as we are able to determine, Whelan and Pugh are the only North Star State lawmakers in Dallas for the conference. It’s the firearms deer opener in Minnesota, and some things are sacred.

What is the ProFamily Legislators’ Conference?

While the conference session topics are now offline, general information and speakers’ bios are still available, as are Vimeo videos pitching the event, which took place between November 5-8. Here’s the description:

The ProFamily Legislators Conference is unlike any other legislators event. It provides an opportunity for conservative pro-family State legislators from across the United States to come together for an insightful briefing session with leading experts in a variety of fields that touch many of the most crucial areas of public service.

Worldview – Address current public policy issues in a manner that honors our Judeo-Christian heritage and the vision of our Founding Fathers.

Fellowship – An opportunity for inspiration and rejuvenation from interaction with legislators from across the country who share common convictions and worldviews.

Legislation – Learn which legislation is working in other States, and which action will have the most impact now; give and receive ideas for modeling legislation to avoid pitfalls and mistakes already made by others.

Speakers – Sessions will include experts from a host of fields, who keep a finger on the pulse of the timely issues and strategies affecting State legislatures.

In short, it’s like an ALEC conference for theocrats.

The conference speakers include:

former congressman Bob McEwen, who was retired by voters after kiting 166 checks over thirty-nine months in the House banking scandal

Frank Gaffney, Jr, whom the SPLC calls “one of America’s most notorious Islamophobes”

This malarky should be a welcome contribution to Minnesota Nice standards of political discourse.

Who is David Barton?

David Barton is a long-time Religious Right activist and Christian nation pseudo-historian whose 2012 book about Thomas Jefferson so shoddy that it was pulled from circulation by its Christian publisher. Promoting inaccurate, misleading, and downright false information has been a hallmark of Barton’s career and a centerpiece of his effort to institute a virtual theocracy in America in which our nation’s laws are literally based upon the Bible.

Naturally, he has now been tapped to take over the super PAC supporting Ted Cruz’s presidential campaign . . .

A long-time vice-chairman of the Texas Republican Party, where he is based, Barton is notorious for exaggerating his own accomplishments and for regularly making outrageous statements such as his assertions that the Founding Fathers opposed the teaching of evolution, that the Bible opposes Net Neutrality, and that Jesus opposes the minimum wage.

He believes that demons control the government and is also a Second Amendment radical who insists that there should literally be no limits on what sort of weapons individuals can own, including tanks, jet fighters, or nuclear weapons.

But most of all, Barton is vehemently anti-gay, claiming that schools are forcing students to be gay and that the government should regulate gay sex. Recently, he has been telling audiences that the Supreme Court decision legalizing gay marriage will force all student athletes to share the same locker rooms and churches to hire pedophiles to run their nurseries while requiring the military to protect those who engage in bestiality.

Barton also believes that homosexuality is “reprehensible and disgusting” and “very repugnant” and that the government can outlaw it. He has also repeatedly asserted that a cure for AIDS will never be found because the disease is God’s punishment for sin[.]

What truthiness is Barton sharing with the suburban lawmakers and former House candidate? Let’s hope that neither lawmaker is shy about sharing in public when they return to Minnesota.