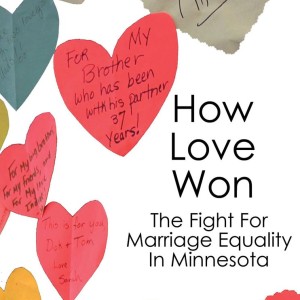 Nov. 6, 2012 marked the first time a voters of a state turned back a constitutional ban on same-sex marriage. The campaign, the volunteers, the leaders, and the voters that helped Minnesota vote “no” are the subject of a new documentary called How Love Won: The Fight for Marriage Equality in Minnesota.

How Love Won takes a look inside the “Vote No” campaign led by Minnesotans United for All Families. It traces the research that led to a groundbreaking campaign that worked to change minds by connecting voters to the emotional aspects of the issue. Through interviews with campaign workers, LGBT leaders, social science experts, and same-sex couples, How Love Won paints the portrait of a powerful campaign at a unique time in history.

Public screenings for the film have not occurred yet, but on Sept. 17, donors that backed the film as well as those appearing in the film gathered for a private screening. To say the film was well received would be an understatement. The film’s director, Michael McIntee of The Uptake, received a standing ovation. The film moved many audience members to tears as it roused memories of the lows and highs of the campaign to vote ‘no.’ The Column attended the screening and interviewed McIntee about the making of the film, the historical significance of the campaign, and how the community can support getting the film into theaters. Watch the interview here: