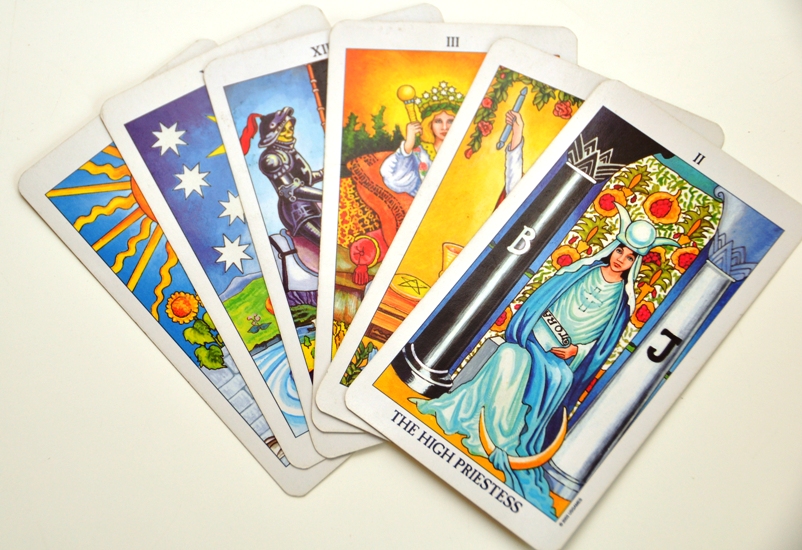 Justice, the 11th card in the deck (note: some decks switch this and Strength, 8th or add an extra card here and Justice is next), is usually interpreted pretty much the way you’d expect from a card named Justice. This is a card considered to embody balance, fairness, and cause and effect. Justice in this sense is most often described as the universal sense of Justice—good things happen to good people. Like The Hierophant, this card can also indicate matters of the law, of government, of societal mores of right and wrong. According to many interpretations, honesty is completely necessary when Justice comes up. Those who are honest, even if they were wrong initially, succeed when this card arises. Legal issues can be aspected with Justice as well, and I know many great readers who specifically read Justice from a legal standpoint.

It’s easy then to Queer the Tarot by recognizing that many of the legal systems in place are actually quite oppressive to queer persons, especially our transgender community members who have to wade through frequently insurmountable red tape to live their life the way they should be able too. Hate crimes are under-punished across the board, and the law is frequently not on our side in matters of fair housing and employment practices. A queer reading of this card would recognize that in spite of universal truths of fairness, the querent’s country’s sense of law and justice may not be on their side at all, and advice should come based on this knowledge.

An alternate queering of this card invokes the heart of the card separate of oppressive legal constructs, and evokes what many of us who are queer know to be true: the law — and it’s interpretation — isn’t always just. Social justice is frequently indicated here for queer clients, and when this card is received, one may be receiving a calling to pursue an activist role. The card could indicate that in the client’s case, true justice will prevail and they will come out on top. It could be a simple call to balance their personal and professional life with a more engaged community role. At it’s core, this card is also about honesty, and if it shows up for a timid or semi-closeted client, it could actually bring good news upon this querent speaking their truth.

This is a card that, when queering, the surrounding cards become incredibly important. A showing of cards indicating bad news or oppressive systems likely warns you of the oppression that legal justice can bring. A showing of Strength or cards indicating communication likely mean to speak your mind no matter what and things will turn out in your favor. If a querent receives other cards of balance, it’s a simple reminder to keep all one’s balls in the air. Of course, if happy cards or cards of triumph surround Justice, that favorable outcome intended for the Justice card in legal matters is at hand.

Where things get tricky is when a querent gets a Hierophant (see previous article) and the Justice card. Both cards can indicate oppressive systems hampering your ultimate destiny — but they can also both be calling on you to take on a role where you fight for social justice and become more involved with changing your society’s skewed view of Justice. The latter is how I most often read Justice, because I do believe this card to be well-intentioned in a way that I don’t see other potentially oppressive cards. Maybe it’s because I truly believe honesty is the best policy (unless safety issues are at hand), a thought deeply engrained in this card, or maybe it’s because I do take on a lot of activist roles and energy in my life, but I personally see the Justice card as pulling us towards a greater, more universal sense of fairness and right. Queering Justice frequently comes down to shucking our notions of law as a construct, and get back more to a spiritual and social sense of Justice. There are so many reasons or ways a person could be called to action—the Justice card frequently queers to get us thinking in that vein. Surrounding cards will confirm your sunny view of Justice and The Hierophant or skew you back towards advising a client how to survive or escape an oppressive situation.

Justice as a word itself means many different things to many different people—as such, this is arguably one of the more subjective cards in the deck. If reading for yourself, follow your own gut response — does “Justice” encourage you to stand up and fight the good fight? Does it warn of potential legal trouble? Does it inspire faith and honesty, and promise you that if you tow the line, good things will come your way? Does it bear in mind oppressive government and legal systems? There’s not a wrong answer—and as such this card can get confusing. As always with tarot, following your own gut response (or your client’s) and checking out surrounding cards will lead you to the right queering.