Queering the Tarot: The Emperor, The Empress, and Archaic Gender Roles 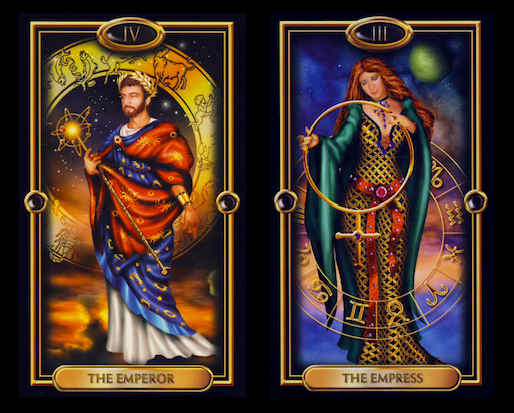 I decided for this month’s column to combine the next cards in the tarot deck, the Empress and Emperor, because the problems and solutions in them are so similar. This is in part because they’re so connected, with the Empress traditionally representing the mother and the Emperor the father. The Empress is historically said to deal with maternal energy, and this is interpreted to be the nurturing side of ourselves and unconditional love. She’s also a positive omen for creative energy and fertility. In the negative, this card can represent “mommy issues” flaring up, or love that is overbearing. Not very flattering, but the Emperor has a dark side too. This card, the yin to the Empress’ yang, often represents control and stability. This most often means getting control of your own life in an advice spread, but in the negative it does signify someone—usually assumed to be a man—who is too controlling, won’t let you spread your wings, or is absent and therefore your sense of discipline is absent. Occasionally, this oppressive force is even violent. In short, when negatively aspected this card is often read as “daddy issues.” Most readers, at least at the professional level, have figured out how to read around gender in the court cards, but these present a different challenge. Mother and Father are different archetypes with deeper ingrained biases in definition than King or Queen or even Male or Female. To truly queer these two, you have to be willing to throw the gendered notions of them out, not only to acknowledge same-sex relationships, but to acknowledge the experience of transgender people, including those who don’t identify on the binary. Furthermore, the way these cards interpret mother and father is troublingly outdated in a world where dads often stay home and do the nurturing, moms are frequently charged with both roles, and many people aren’t even raised by their birth parents.

The Empress, boiled down to simplicity, is someone who is nurturing and creative, with lots of love to give. This describes as many men and genderqueer people in my life as it does women. I would actually argue that since I run in primarily queer circles, this is more likely to represent a non-female friend than not when it shows up for me. While there are a lot of negative stereotypes of feminized gay men it’s not untrue that a great number are far more in touch with these sides of themselves than men in the world at large. It’s not always inclusive enough to acknowledge in a session that a person is LGBTQIA* or throw out gendered language. We have to take the life experience of those falling under their specific identity into account, as well as the culture of the queer community at a given time. The negatives of this card do not have to be feminine either. The issues may not be with a mother figure at all, just someone in the querant’s life who is overbearing, or indicative that a system of support and nurturing has been absent or taken from the querant’s life. The latter is not uncommon in the queer community at all.

The Emperor in it’s simplest form is about control and stability, or often, someone who is too controlling. It can also indicate a lack of stability. Again, not uncommon at all for LGBTQIA* persons. This one “queers” a new way though. The Emperor, especially if negatively aspected and paired with The Heirophant and/or Justice card can also be indicative that something in the querant’s experience is being hurt or damaged by our society or legal system. If this card is about being allowed to call our own shots in life, even with all the personal support in the world, it remains true that there are rights and dignities not afforded to queer people that severely impact the ability to fully take control of our lives fully. I have seen the Emperor indicate this enough times that it stays in my mind as a standard interpretation of this card. Finally, for members of the kink community, a “negatively aspected” card of control may not be negative at all—if the querant is looking for elements of control and dominance in their relationships, that should obviously be taken into account.

Thinking of these cards as Mother and Father is not only outdated, but doesn’t take into account the unique experiences queer people face long after leaving the rule of their parents. Not only do our relationships look different, but how we navigate through society is different. Tarot should help people transform their lives into the best possible version of it, and if we look at the Empress as nurture and creation and the Emperor as stability and control, as well as leave room for intuitive and alternative interpretations, that’s going to be a lot more beneficial in helping most querants—of any identity—do so.

2 responses to “Queering the Tarot: The Emperor, The Empress, and Archaic Gender Roles”