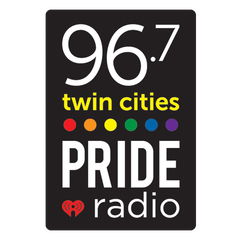 iHeartMedia, formerly Clear Channel Communications, has launched 96.7 Pride Radio which bills itself as a station with a “LGBT-centric format.” The station debuted with a 24-hour Madonna marathon and will have non-stop commercial-free music through Twin Cities Pride. The Column first reported on iHeartMedia’s plans for an LGBT station back in October 2014.

“June is Pride Month, and I can imagine no better time to launch a station this important to the Twin Cities community,” iHeartMedia vice president of operations Hartley Adkins said in a press release. “This groundbreaking station represents a place for amazing music and entertainment, but also a platform for the LGBT community. 96.7 PRIDE RADIO is a destination to express opinions, be heard and connect.”

“We’re thrilled to bring 96.7 PRIDE RADIO to the Twin Cities LGBT community,” added PRIDE RADIO Brand Manager and SVP/Programming DON PARKER. “Our PRIDE RADIO programming and content is proven to develop a strong connection with the community on a national level through our iHEARTRADIO digital platform. With Minneapolis-St. Paul having one of the most active LGBT communities in the nation, we look forward to an even greater bond with local listeners, who will now have a customized version of PRIDE RADIO available on FM in the Twin Cities!”

Sister station, KDWB hailed it as “the only FM radio station in the United States with programming devoted to local Lesbian, Gay, Bisexual and Transgender (LGBT) community and allies.”

The Pioneer Press followed suit labeling it “the first FM radio station in the country with programming devoted to the gay, lesbian, bisexual, transgender and allied community.”

That is news to KPQR 99.1 Wild Planet Radio out of Portland, Ore., which is probably actually the first LGBT FM radio station in the country, having debuted in early 2015. It bills itself as “America’s FIRST nonprofit, noncommercial LGBT Community Radio Station.”

The brand manager, Don Parker, is based in San Francisco, where he also serves as senior vice president of programming for iHeartMedia San Francisco and Sacramento. In addition, both of Pride 96.7’s weekday evening on-air personalities – Pacey (6 p.m. – 10 p.m.) and Christie (10 p.m. – 2 a.m.) – are spinning from the Bay Area. The rest of the station’s weekday rotation will be beaming in from San Diego, Washington D.C. and Tampa, Florida.

For example, why is it that much of the programming on 96.7 Pride Radio so far has been bumping club music? Does all of the programming need to be evocative of a Sunday-Funday rooftop pool party? Did that Sam Smith lullaby really need to be juiced-up and sexified, so that now it works better as I pull off my shirt in front of a roomful of sweaty, twerking strangers?
While there may be some LGBT listeners who want non-stop dance-pop, the omnipresence of this music suggests that maybe it would have been better to have named the station “The Club” or something similarly innocuous, rather than try to pander to an entire “community” at the risk of putting them all in a tidy box.
This is not to say that there isn’t room for a smart, nuanced, and diverse Twin Cities radio station that services and elevates all things LGBTQA — that could be a win. But when programming is limited to a Will-and-Grace-ified understanding of what it means to be part of this community — no one is served except those who never leave the Saloon.