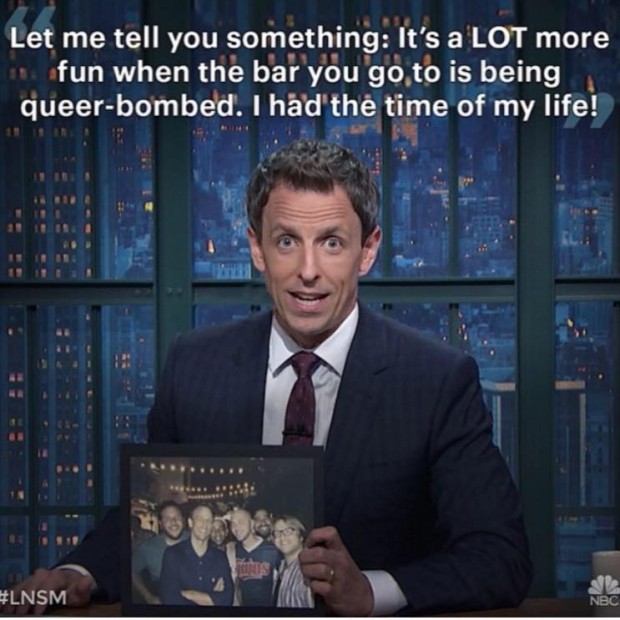 Saturday Night Live alum and current host of NBC’s Late Night with Seth Meyers was in Minneapolis last week and stumbled onto a popular queer event. Meyers had just finished a performance at the State Theater and he stopped in Marin Restaurant and Bar which had just become swarmed by members of the LGBT community.

On his show, Meyers told the audience about being at a “queer bomb” event.

“We walked in and the bar was really crowded,” Meyers said. “The hostess said, ‘We’re sorry we’re really crowded tonight. If you need a drink you have to get it at the bar. We’ve been really caught off guard…We’ve been queer bombed…it’s a lot more fun when the bar you go to is being queer bombed. I had the time of my life.”

Chad Kampe, who organizes Flip Phone’s parties and brunches that feature a new diva from the late 1990s and early 2000s each month, told City Pages:

“We make it a queer friendly space to allow members of the LGBTQ community to go out to spaces that they maybe would not have discovered and make it safe,” explains Kampe. “There’s a lot of behind the scenes work because they’re actually more work than Flip Phone.”
“He knew exactly what queer bomb was,” says Kampe. “Matt, my husband, went up to him to give him a sticker. [Meyers] said ‘Oh yeah! This is for the Queer Bomb! Awesome!’ He produced that language — not us. I don’t know if he was briefed into what was going on at the space, but he was excited to just be there. He was really nice to everyone and took a sticker.”

Flip Phone is hosting a number of Pride events in the next few weeks including Princess Drag Brunch, the Beyonce-inspired I Woke Up Like Dis, Pride Pool Party, Robyn vs. Taylor, and Pride in the Sky: Parade Rooftop Viewing Party.