Home News Does a Butch Woman have Cis-Privilege? Absolutely! 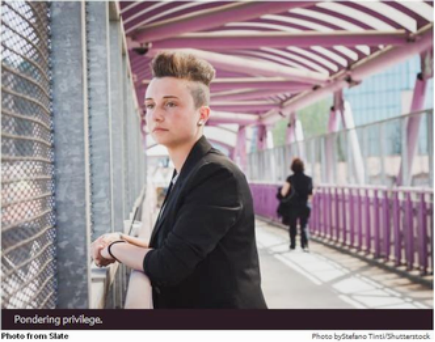 Slate recently ran an article titled, “I’m a Butch Woman. Do I Have Cis Privilege?” In the article, Vanessa Vitiello Urquhart stated, “I was mistakenly misgendered in front of an auditorium of people” and continued to explain how she feels she doesn’t have cis-privilege, “It grossly oversimplifies my gender presentation, which I consider essential to living authentically, as nothing more than a fashion choice.” Near the end of the article, the author concedes to her cis-privilege by stating, “But cis-privilege? Yeah, I’ve got some of that.”

This article caused some debate in the Trans community because we deal with being misgendered every single day of our lives and are repeatedly told by society, as well as the LGB community, to “get over it,” “stop being so sensitive,” and “well, if you choose to be transgender, then you should expect this type of treatment.”

I reached out to Vanessa Urquhart on twitter to get her reaction from the 330 plus mostly disagreeing comments on her article as well as the backlash chatter on Facebook; unfortunately that conversation did not go as expected and it finally produced the following tweet:

A cis-gender person stating that anything is “not a trans issue” is a sweeping minimization of a community that has never had any level of cis-gender privilege and is an example of how the greater LGB population chooses to speak for us.

Cis-gender privilege allows you to go into a public restrooms without being harassed, it allows you to play sports on your chosen team without question, cis-gender privilege means a stranger will never ask you what genitals you have, and it means never having to have two notes from licensed professionals to have your gender marker and name changed on your state issued ID.

Cis-gender privilege also gets you an apology when you are accidentally misgendered instead an eye-roll when you try to correct the offending person. Cis-gender privilege goes much deeper than what Vanessa Urquhart may believe or even understand; it involves being accepted in your current gender without question. An acceptance the transgender community lacks everyday, not just at certain events. As a transperson, I have no “go-to response” and I certainly don’t have any deflection tactics.

I’m a transwoman and granted I have never walked in the shoes of a cis-gender butch lesbian (or cis-gender anything), so when I received the following tweet, I had no experience to fall back on to address this statement, so I reached out to a couple of transmales.

I spoke with Mitch Kellaway, co-editor of Manning Up Anthology and writer for the Advocate, Lambda Literary Review and Original Plumbing and asked his opinion on Vanessa’s article and the above tweet.

“Urquhart enacts a common misreading of the concept of “cis privilege” in her article. Rather, what she describes is her own lack of “gender conforming privilege.” “Cis-gender” and “gender conforming” are not synonyms — in fact they’re very different concepts. Urquhart, being a cis-gender, gender nonconforming person, still benefits from cis privilege, and experiences oppression from her gender nonconformity.”

“When she describes being misgendered as something she has akin with trans people, and therefore an indicator that she might not actually benefit from cis-privilege in that situation,” she makes a mistake to think that “misgendering” is the same experience for a cis-gender and transgender person within a cis-dominant society. They are not. Aspects may resonate similarly, but her response and the responses of those around her will not be the same — and in fact, they will reinforce cis-dominance by tacitly implying that it is shameful or preposterous that she could be a different gender than the one that her body (represented here by her “woman’s voice”) betrays.”

Joe Ippolito, PsyD., LICSW, transmale and founder and chairman of Gender Reel, an annual festival and website showcasing gender non-conforming and transgender identities in film and performance art offered this to say, “I do think there are certain privileges that butch women have over trans men or trans women, and that comes down to our anatomy. All cis people have some privilege around this issue…”

She [Vaness Urquhart] does not at this point self-identify as trans, and is taking liberty in comparing her experiences to that of trans people.,” Joe continued, “but merely talking about cis-gender presentation privilege and how as a butch woman, she faces discrimination due to this factor. I am not sure it makes her argument stronger to relate it to a Trans experience.”

Does Vanessa Vitiello Urquhart have cis privilege? Yeah, I’m just not sure she knows how much privilege she actually has or the difference between gender nonconformity and being transgender. At the end of the day, her suit and tie come off, but my breasts, larger hips, and overall gender dysphoria will stay with me forever.