The Column Telling the stories of LGBT Minnesota
Home Arts Dude…Where’s My Car? After Hours with Jendeen Forberg 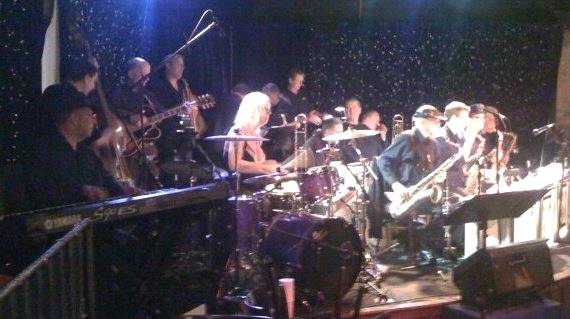 On the morning of New Years Eve 2014, I received a message from Jendeen Forberg, the former drummer for the dark-glam band ‘All the Pretty Horses’. I was working on a piece recalling 2004 where she was prominently featured in the ‘Venus of Mars’ documentary recently reissued on Amazon Instant Video; a film about Venus DeMars and ‘All the Pretty Horses’ and the struggles they faced as a band that broke gender boundaries.

Jendeen’s blue Jeep Cherokee was stolen from a downtown Minneapolis parking lot and to make matters worse, her and her partner Tempest were working on getting a tow truck for Tempest’s car which was now sitting haplessly on the side of the road with a flat tire.

In ‘Venus of Mars’ she was funny, quirky, straight forward and above all, appeared to be a realist who understood that what was going on in 2004 would have relevance in her life even today. When asked if her quick sense of humor was a defense mechanism, she replied, “I don’t consider my reactions ever being a defense mechanism per say. Yet an opportunity [or] a challenge to take on face to face in a gregarious faction the nonsense that people on occasion would toss our way. I NEVER had any shame or insecurity about who and what I am, which renders all that silliness inert. Like dogs barking. Irritating yes, but I don’t speak dog!”

She started the Wolverines, a Jazz Band in 1973 and has been the leader since 1980. Her first love musically, The Wolverines have toured all over the country and in the process, they’ve gone through two tour buses. They’ve opened for Sarah Vaughan and Manhattan Transfer, performed on the initial broadcasts of A Prairie Home Companion and their first four albums received the coveted four star reviews in Downbeat magazine.
As a person who transitioned later in life, Jendeen was cut out of the Jazz world for a time because of her transition and her parents and drum teacher Elliot Fine became her “saving grace.” Jendeen said, “Their support of me as a person who loved music allowing me to develop to a rather high degree. Thus giving me the knowledge that whatever happens, what is important is that I deliver and can deliver amazing skills in a band I love with people I love. I mean I have nothing that ranks higher than that really.”

Her best friend and pianist in the Wolverines, Rick Carlson, (lovingly known as Bastard. To which Jendeen is called Hornswaggle) when asked by several of the Wolves at the time of her transition, “what the Hell is Forberg’s problem?” Carlson said, “All I know is he’s still got a wicked sense of humor, swings like Hell and the checks don’t bounce. What’s YOUR problem?” Jendeen continues, “As for us a trans people, so it is with others. There is always a learning curve. We don’t really have control over that at all. Just soldier on.”

“My approach was that I was going to transition, just not sure of how far. So since being a public person it was my rule that if I saw anyone when I was out, I went up to them and said hello. To be sure that, say what you will, but it was known that in no way was I ashamed of what I was doing. Granted word soon got out. It was dodgey for some time.”

Jendeen’s transition, however, came with a price, ” I was surprised that my friends, some I had known since High school, separated themselves from me. Here we all are, Jazz musicians, the supposed explorers that buck convention to embrace expression and explore deeper and relish discovery of a musical nature within ourselves all of a sudden being puritanical. What a bunch of posers was my thought.”

Feeling that her image would tarnish the bands standing in the Jazz community, it began to negatively affect her band mates and their ability to get work. “My gigs fell off to the point that my town home went into foreclosure. I had no hot water or heat for that winter.” Jendeen refocused her attention and embraced herself in percussive improvement in the Metal genre. Enter All The Pretty Horses.

During this time, “The only thing that was my saving grace was I had tons of stuff to practice and the Horses. For me and the gang in spite of the challenges there may have been within the group it was never (then) to a point that obscured the reason we were all there. It was a time where we WERE different and glad of it. We embraced it and basically felt, say what you will, but once we hit the stage we will kick your asses. Which was always true.”

After leaving the Horses, she joined her partner Tempest’s band Harsh Reality, a metal band with its roots and influences in Motorhead, Slayer, Sepultura and Black Sabbath. “Tempest who put her band on hold to be in the Horses asked if I wanted to be the drummer. I said absolutely. Her music was heavier and actually then somewhat beyond my ability. Which though frustrating, gave me immediately what was unavailable with Venus [DeMars], a goal to pursue which led to a much more intense practice regimen. Finally I GET TO PULL ALL THE STOPS OUT.”

Harsh Reality has since released two albums, ‘Witness To It All’ in 2006 and’ Harsh Apocalypse Electro Resurrection Live’ in 2007 and is currently seeking a new guitarist. Harsh Reality is always in the mix and Jendeen has been very busy, seeking and working with similarly minded folks to challenge and develop herself and her craft.

Now in it’s 41st year and after an 18 year stint as the house band at The Times, the Wolverines, currently a trio, found a new home at Hell’s Kitchen in Minneapolis playing two shows a month. “There seemed to have been a period of adjustment locally if you will. The notoriety of being out as trans gave me quite the boost in reputation. These days, especially with the Wolverines in the Jazz strata and corporate world, I notice only acceptance. More accurately, it is a non-issue. It is more of “can you do what is expected of you.” Which is as it should be.”

Never resting and constantly busy, Jendeen has done numerous musical theater projects and some recording for other bands. “I practice more than ever. Just played the Capri Theater for a Christmas archived movie short featuring Bing Crosby, Mel Torme, Judy Garland, Spike Jones and others. I have also for the last sixteen years [been] working for Streetworks, which is basically hitting the streets and connecting with at risk and homeless youth. I also run a youth food shelf twice a week at Groveland Church.”

“Seriously for me,” she continues, “Variety is the spice of my life. The more the better.”
Oh, and the cars? Jendeen messaged later that day, “P.S. the car is still gone, finally got the towing folks to get Tempest to a tire joint so she can get to work.”