Conservative media are giving anti-transgender groups a platform to attempt to derail a proposed policy that would allow transgender students to fully participate in high school athletics.

The Minnesota State High School League is considering a policy that would provide inclusion for transgender athletes. The Catholic Church and the religious right have mounted a campaign to block it. In the process, they’ve perpetuated false stereotypes about transgender people, including the myth that transgender students will prey on fellow students in locker rooms, showers, restrooms, and hotel rooms. According to many law enforcement, civil rights, and sexual assault prevention organizations, the idea that transgender inclusion will put anyone at risk is unfounded.

According to the proposed policy, transgender high school students can play on the team of their choice (male or female) but have to have a physician’s documentation and in some cases must have begun hormone therapy to “preserve competitive equity.” The MSHSL policy also provides transgender students avenues for corrective action if a school district does not comply.

The conservative infrastructure in Minnesota has lent a hand in spreading false notions about transgender students — in particular, the notion that there will be trouble in the showers.

“There’s this attack, I’m sorry, but this attack on Christian values, attack on moral values, my opinion and here’s another example,” said Paul Ridgeway, a host on the Salem Communications-owned AM 980 KKMS.

“I think the other thing we have to remember, again, elections have consequences and this is the result of electing a full Democratic house and senate and having a Democratic governor,” co-host Gary Borgendale said.

Ridgeway and Borgendale were speaking with Michele Lentz, the head of the Minnesota Child Protection League Action, an anti-LGBT group that had just placed an ad in the Star Tribune insinuating that transgender high school students are predators. The ad featured a tiled wall with shower knobs and read, “A male wants to shower next to your 14 year old daughter. Are you okay with that?”

Ridgeway continued, “The Minnesota State High School League are adopting a policy for transgender students to participate in high school athletics according on their gender choices rather than by the gender listed on the birth certificates, so that means, at least I think it means, if you are a
guy who wants to be a girl you can shower with the girls, if you are girl who wants to shower with the guys if you think you are a guy… I think the world’s getting nuttier, it gets nuttier. This is nuts.”

Lentz of the MNCPL responded, “Yeah this is absurd…First of all this policy has an underlying assumption that gender is a matter choice not biology and we just categorically reject that.”

(In reality, gender is considered to be “the range of characteristics pertaining to, and differentiating between, masculinity and femininity.” Sex is determined biologically. Lentz confuses the two.)

For almost 20 minutes, Ridgeway, Lentz, and Borgendale talked about what will happen in the showers if transgender students are allowed to participate fully in high school athletics.

“Under the policy, I mean so really you could have a girl showering with men and a guy showering with girls, am I correct? I just got to tell every parent, every grandparent, if you are listening, your an 11 year old, 14 year old kid — 12 year old girl and you’re in the shower and a guy walks in, and he’s legally right to be there. That is absolutely crazy and let me reverse it — even though guys I know how we feel about looking at women, but a girl –I’m getting it all goofed, a girl with guys or a girl going in the guys shower.”

KKMS is also running ads for the MN Child Protection League with a shower theme: 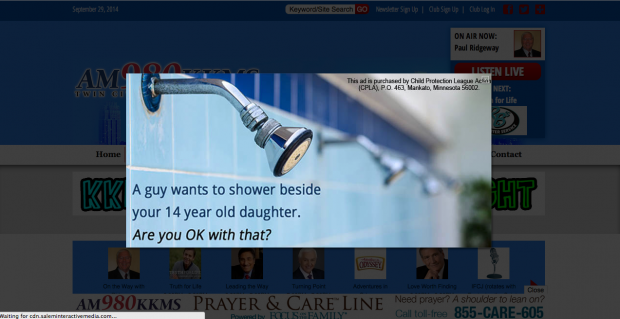 A day before, Sue Jeffers on AM 1130 KTLK hosted MNCPL’s Marjorie Holsten who called the policy “one evil on top of another and boy this one is worse than most we’ve seen.” The two talked about students having to share a hotel room with a transgender student.

“We also want people to call principals, alert them to it and have those people call the state high school league and say, ‘we don’t want this.’ I mean this really is going to be opening schools up to litigation. We’ve already seen what happened when it’s already been implemented in Colorado.”

Her group, MNCPL, has also been pushing a story from Colorado as proof that it’s “dangerous” to allow transgender students equitable access to accommodations. From a recent MNCPL email:

This policy is MN’s version of CA’s bathroom bill, where K-12 students can self-identify gender. In a CO school with a “transgender accommodations policy,” girls were threatened by school administrators that if they and their parents didn’t stop complaining about boys (self-identifying as girls) using their bathroom, the girls would be punished and ineligible for sports and potentially other school activities, even though the boys were verbally harassing the girls by making comments about their bodies while in the bathroom. This could cost some girls their college scholarships and even professional sports careers.

Holsten and MNCPL are incorrect about Colorado. In Florence, Colorado a group of Christian conservative parents claimed that their daughters were harassed because they had to share a bathroom with a female transgender student. It did not involve the state’s athletic policies, and no harassment was found to have occurred. Even the Christian conservative website Lifesitenews noted that original stories about harassment appeared to be incorrect and several media outlets pulled the story. The school even asked the local police department to investigate, but the students who claimed they were harassed, refused to participate.

MNCPL is joined by both the Minnesota Catholic Conference (of the Archdiocese of St. Paul and Minneapolis) and the Minnesota Family Council in continuing the false theme that transgender students present a danger in showers.

the MCC wrote in a letter to MSHSL: “And what about students who refuse to use facilities because they feel unsafe by the presence of someone of the opposite sex in their locker or restroom facility?… The safety and well-being of children need to be considered with this policy. There may not be many ‘opportunists’ looking to take advantage of the Policy (given the certification process), but biological facts and the predatory sexual proclivities of human beings cannot be wished away.”

The Minnesota Family Council asked the “body of Christ” to work to stop the policy from passing at the same time it stoked the shower fears in an email to supporters:

Sadly, this isn’t something that can happen only in California—it’s about to happen right HERE, in Minnesota (no, really, it is), unless we (the body of Christ) stand together to DO something about it.
The Minnesota State High School League (the organization all schools, including private Christian schools, must be members of in order to compete in state athletics) is working directly wit hOutFront Minnesota on a Transgender Student Athlete Policy that will allow boys who identify as girls to play on girls’ sports teams and girls who identify as boys to play on boys’ sports teams. This also means that boys and girls can have access to the same showers, locker rooms, bathrooms, and hotel rooms as the opposite sex.

The Minnesota Child Protection League sent out an email on Tuesday claiming that they are not spreading misinformation about transgender students, despite the Star Tribune ad: “There is no maligning of transgender youth. CPLAction is concerned about policy that is unsafe for children–transgender and all other students alike.”

The groups’ previous email contained items like: “Girls’ and boys’ privacy will be violated if they disrobe or shower with, or use the toilet next to, or share a hotel bed with a transgender person with no right to know the person is the opposite sex,” and “Students will be put at risk of sexual assault.”