On the back of the sports section, the Minnesota’s largest newspaper published an ad from the Minnesota Child Protection League targeting a proposed policy to allow transgender students participate in high school athletics.

The Minnesota Child Protection League, an anti-LGBT group that opposes LGBT inclusion in the state’s public schools, bought an ad in the Sunday Star Tribune. The ad says, “A male wants to shower next to your 14 year old daughter. Are you okay with that?” 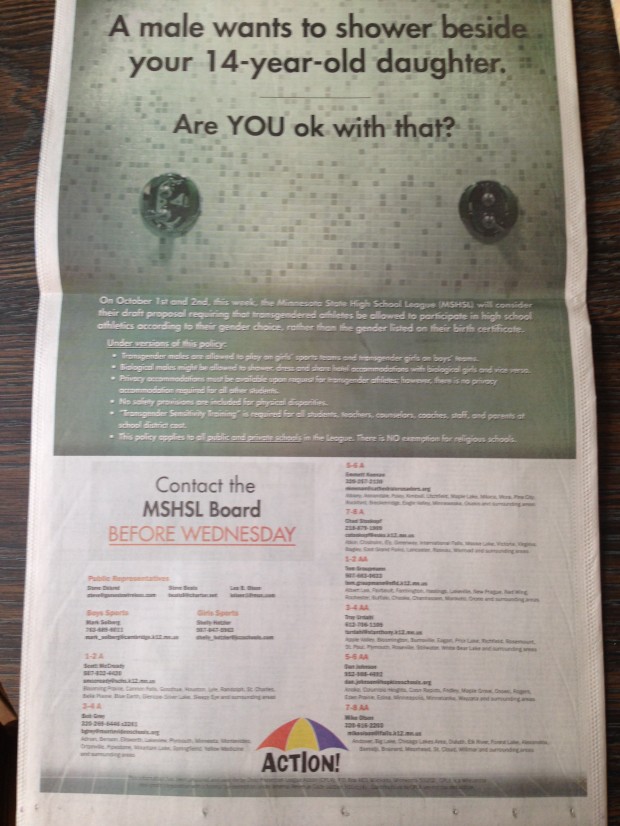 The ad is part of a push by MNCPL to stop the Minnesota State High School League from passing a policy that would provide inclusion for transgender athletes. The Catholic Church and the religious right have mounted a campaign to block it. In the process, they’ve perpetuated false stereotypes about transgender people, including the myth that transgender students will prey on fellow students in locker rooms, showers, restrooms, and hotel rooms. According to many law enforcement, civil rights, and sexual assault prevention organizations, the idea that transgender inclusion will put anyone at risk is unfounded.

According to the proposed policy, transgender high school students can play on the team of their choice (male or female) but have to have a physician’s documentation and in some cases must have begun hormone therapy to “preserve competitive equity.” The MSHSL policy also provides transgender students avenues for corrective action if a school district does not comply.

The MSHSL will meet on Wednesday, Oct. 1, and Thursday, Oct. 2, to discuss — and possibly approve — the policy.

Minnesota is by no means the first state to have its high school activities association consider such a policy. Associations in Illinois, California, Maine, Colorado, Massachusetts, Vermont, and Connecticut have had similar policies for several years. Even associations in states that are considered conservative have adopted such policies including Nebraska in 2012, and North Carolina and Virginia in 2014. Minnesota’s neighbors to the south and west have also approved of the policies. Iowa approved similar policies earlier this spring. The South Dakota High School Activities Association approved such recommendations in June.

As the Star Tribune’s Sunday edition hit newsstands, the reaction on social media was swift with many people saying they were ending their subscriptions:

I'm ready to cancel my @StarTribune Sunday subscription over the ridiculous anti-transgender ad they allowed in today's paper.

Ad casting trans students as aggressors when they're often viciously targeted is horrid. Why did @StarTribune publishers amplify that hate?

I really hope the @StarTribune issues an apology for this abomination of an ad. Disgusting level of misinformation pic.twitter.com/LWXdhSHhwe

These people are terrible "@WentRogue: Meet the people behind the full-page transphobic ad in today’s @StarTribune: http://t.co/3Qc619islZ"

Stand up for trans students by rejecting Child Protection League fear. Facts on @MSHSL work for fairness: http://t.co/G28DYlbX5C via @andymn

Meet the people behind the full-page transphobic ad in today’s @StarTribune: http://t.co/2eV7ivVZC0

Closed-circuit to Strib sports and news desk: if you haven’t done a deep dive on the MSHSL trans-athlete issue & its opponents …get going.

If you’re pissed about the ad – and you have every right to be – a boycott is valid, but I’d suggest getting in publisher’s face first.

Does Strib usually split Sunday Sports into 2 sections or did CPLA ad backpage placement force it (due to Outdoors)? pic.twitter.com/b9MwmsP0P8

Does Strib usually split Sunday Sports into 2 sections or did CPLA ad backpage placement force it (due to Outdoors)? pic.twitter.com/b9MwmsP0P8

Got call in to @StarTribune marketing VP seeking comment on anti-transgender ad. In past the paper has refused to comment in similar cases.