As the Minnesota State High School League considers a policy that would provide inclusion for transgender athletes, the Catholic Church and the religious right have mounted a campaign to block it. In the process, they’ve perpetuated false stereotypes about transgender people.

According to the policy, transgender high school students can play on the team of their choice (male or female) but have to have a physician’s documentation and in some cases must have begun hormone therapy to “preserve competitive equity.” The MSHSL policy also provides transgender students avenues for corrective action if a school district does not comply.

The MSHSL is set to vote on the policy next week on Oct. 2.

On Wednesday, the Minnesota Child Protection League, a group that opposes LGBT inclusion in schools, sent an alert to its members, titled, “ALERT! All High School Sports Teams in the Crosshairs,” that made several anti-transgender statements:

“Some situations that could result from this policy may be alarming. For example, a 7th gr. girl on the JV volleyball team in the girls locker room could shower next to a person she doesn’t have the right to know is a genetic male (unless she happens to see his unchanged male anatomy).”

“Religious schools could be barred from participation in the MSHSL for non-compliance with the policy, which could negatively impact the competitive level of their sports programs and, as a result, their enrollment.”

Jim Thompson of Andover took cues from the MNCPL in a letter published in ABC Newspapers on Thursday. “Transgenderism is advancing in our schools and will now threaten the privacy and safety of high school students who are involved in athletics.Parents and guardians, you need to protect your high school kids from this ridiculous policy that will create a climate of intimidation and pose a threat to the safety and well-being of all young girls and boys. This will impact private schools as well.”

Christian schools have started a campaign to stop the policy.
The Legacy Christian Academy in Andover penned a letter (PDF) opposing the policy and stating that “Transgenderism is a mental disorder that is quickly advancing in our schools” and that the MSHSL’s policy was drafted “to appease the powerful and very vocal LGBT lobby…This will harm all students.”

Providence Academy, a Catholic prep school in Plymouth, sent an alert to parents and staff on Monday urging them to tell MSHSL to vote against the policy:

“Unfortunately, the draft MSHSL Policy—which is NOT required by state or federal law—forces schools to comply with its unfunded mandates without accommodations for those schools or students who object. Additionally, the Policy seems to be intentionally unclear about any sanctions schools or their students may face for failure to comply.”

The Minnesota Catholic Conference, the public policy arm of the Archdiocese of St. Paul and Minneapolis has begin to organize Catholics against the policy. It recently sent out an alert that said:

“If this proposed policy is adopted as written by the MSHSL, it is reasonable to assume that the MSHSL will try to have your or your child’s school allow a transgender student-athlete with a visiting team use the same bathrooms, showers, and locker facilities reserved for the gender with which the student personally identifies, including the opposite sex — disregarding the privacy and safety of other students, and in contravention to the values and mission of your school.”

In a letter to the MSHSL, MN Catholic Conference head Jason Adkins wrote, “If enacted, the policy… would violate established principles of justice contrary to the common good… Students may believe that they are ‘trapped in the bodies of the wrong sex’ and desire to be recognized as the opposite gender, but this desire reflects an underlying disordered perception of self.”

Adkins issued a veiled threat of legal action if the MSHSL adopted the policy.

“Though it has its own corporate status, the Minnesota State High School League is still a form of ‘state actor.’ Therefore, it could be subject to litigation were it to enforce this Policy and punish members schools or students in a way that is plainly inconsistent with Minnesota law…Setting aside the propriety and legality of the Policy, the Policy should be amended and exemptions should be afforded to private religious schools (including out many MSHSL member Catholic schools) that object to accommodating a student’s self-selected gender identity.”

Then the Catholic Conference perpetuated a false stereotype about transgender people:

“And what about students who refuse to use facilities because they feel unsafe by the presence of someone of the opposite sex in their locker or restroom facility?… The safety and well-being of children need to be considered with this policy. There may not be many ‘opportunists’ looking to take advantage of the Policy (given the certification process), but biological facts and the predatory sexual proclivities of human beings cannot be wished away.”

The idea that transgender people sharing space in locker rooms and restrooms with cisgender people will lead to sexual assault is a false claim unsupported by research and statistics. It’s been used in California in an attempt to repeal transgender-inclusive laws in that state, and in local communities considering nondiscrimination ordinances. And now it’s being used by the Archdiocese of St. Paul and Minneapolis, as well as the Minnesota Child Protection League.

Earlier this year, Media Matters for America published a report that included input from law enforcement officials, state human rights workers, and sexual assault victims advocates and found that those claims were baseless and “beyond specious.” 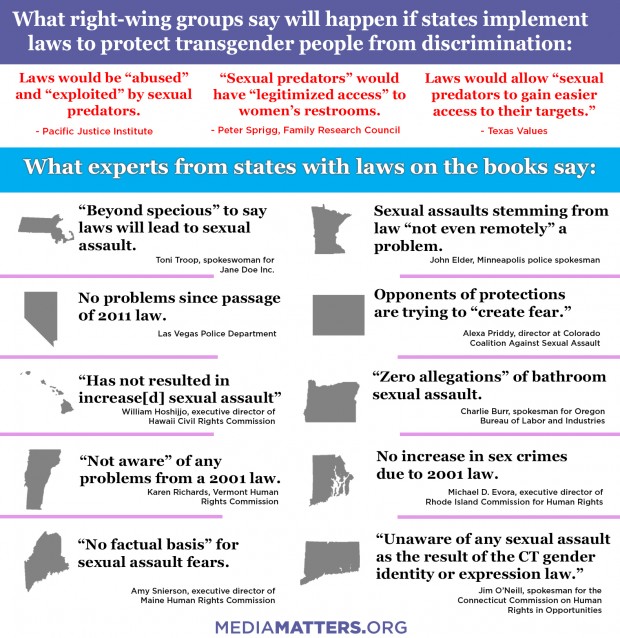 Here’s the full letter from Jason Adkins of the Minnesota Catholic Conference.