Home News Marcus Bachmann: ‘We are not involved in reparative therapy,’ but will turn... 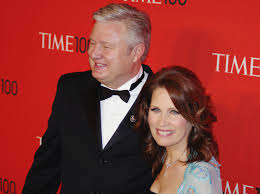 Marcus Bachmann, husband of Rep. Michele Bachmann, told a radio host on Friday that his clinics do not do reparative therapy, but will gladly counsel LGB client to become straight.

Mr. Bachmann was on Christian radio station, KKMS, on the program On the Way with Paul Ridgeway to talk about Christian counseling aimed at helping LGB people leave the lifestyle. In the hour prior to Bachmann’s appearance, Ridgeway spoke with David Hall of Outpost Ministries, an ex-gay organization in Robbinsdale. Hall said that Outpost Ministries doesn’t try to convince members of the LGBT community to leave the lifestyle, even though the group was an integral part of Trinity Works’ efforts at Twin Cities Pride.

Marcus Bachmann applauded Hall for leaving “the lifestyle” and said counselors who encounter people who are struggling with their sexual orientation should help them change from gay to straight.

[sws_green_box box_size=”100″] MB: You talk about a battle that he has climbed — up a mountain that has been culturally so much against what our culture believes today. The fact is — and we get this at our Christian counseling clinic — the fact is that there is a real movement to be against people who are deciding they’re not satisfied with a lifestyle that’s not fulfilling for them and if they want to change from their same-sex attraction there should be no hinderance from a counseling perspective to stop them, but rather encourage them and really allow them to see what changes could occur from the inside out for a person who has been struggling for probably years from some addiction that has led to their same-sex attraction. I think it’s an arena that I applaud David Hall for his stand and also for his organization. [/sws_green_box]

Bachmann continued by saying that more and more professionals are seeing LGB clients that have successfully changed from gay to straight:

[sws_green_box box_size=”100″]MB: We are seeing more and more in the professional realm that actually have seen the changes for people that have occurred — see it’s always a decision of the person coming in to the counseling office: What do they want? Are they open? Are they interested in change in their life? And we have had success and we’ve seen a number of people who have said ‘This does not agree with my value system. I recognize that as a person of faith that I may have some attraction in my emotions — maybe even for years — but it goes against my principles of my faith.’ Can we talk about — shouldn’t we be able to talk about within a counseling realm a person who desires to have change including in this area of same-sex attraction? [/sws_green_box]

Marcus Bachmann then said homosexuality is a choice and that LGB people have a high instance of mental illness:

[sws_green_box box_size=”100″] Ridgeway: Your colleagues and stuff, you know, they get hostile though don’t they when you bring up Christ or the holy spirit?

MB: They become very angry at the idea, you know, we’re not embracing — we’re not going with the norm of people who are involved in the homosexual community. I mean the fact is it is a matter of choice. There is a decision to be made and people are coming to grips with the fact that if this does not align with their faith their value systems, then they do have a right to ask for help, ask for assistance be counseled in this very sensitive area. We are — just like David talked about — we’re not out to force, manipulate, pressure. We are there to walk alongside and someone who has had this battle, we recognize that for so many of them they have kept it in secret. They have struggled with their emotions. There is high statistics regarding the mental health issues that people have struggled with being in same-sex attraction. [/sws_green_box]

Then a caller questioned whether Bachmann’s clinic engages in reparative therapy:

[sws_green_box box_size=”100″]Daniel: Yes Mr. Bachmann. I called your clinics asking about reparative therapy for homosexuality and i was told you guys didn’t do that. Is that true or not?

MB: No, we are not involved in reparative therapy in the sense that most people understand reparative therapy. You see reparative therapy has a real connotation for manipulation pressure, trying to force someone against their belief system. The last thing that an ethical Christian counseling agency… would not be involved in such kind of approach. I think it needs to be made very clear, you know I’m sure it depends on how some people would define reparative therapy, if we are talking about someone who is asking for help or counsel because they believe that same-sex attraction goes against their biblical or their value system then of course what professional ethical counseling agency wouldn’t assist someone in being able to talk about that? And being able to walk with them through their own desires, their own self will to make that change in their life. So I think its very important that we are very clear that when we talk about reparative therapy why we’ve taken a stand not say that we will do all the negative connotations about reparative therapy. [/sws_green_box]

Here’s the audio of the interview between Marcus Bachmann and Paul Ridgeway: