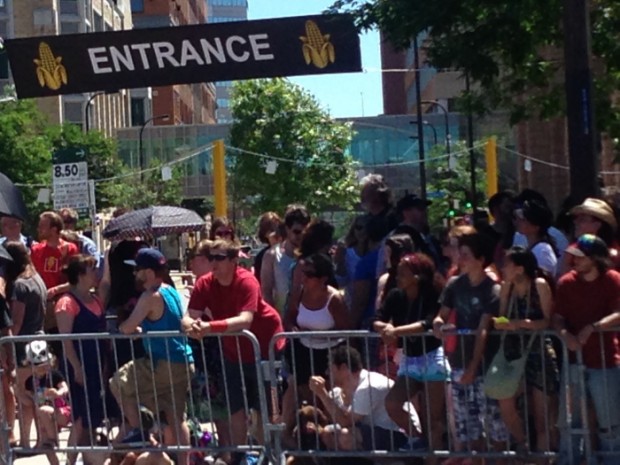 An evangelical group called Trinity Works sent outreach workers canvassing through Twin Cities Pride, and set up a corn feed in hopes of luring members of the LGBT community into its brand of anti-LGBT conservative Christianity.

Using misleading tactics, Trinity Works its coalition of dozens of churches claims to have converted 80 people to its brand of Christianity during Twin Cities Pride, according to a post circulating on Facebook among the group’s supporters:

“This weekend at Twin Cities Pride, OutFront Minnesota’s Anti-Violence Program staff worked with more than 75 trained volunteer advocates and supportive clergy to help ensure that everyone had a safe and fun Pride,” OutFront Minnesota said in a statement. “Thanks to our planning with Twin Cities Pride, we were able to greatly limit the number of people the evangelical group Trinity Works tried to ‘convert.’ If the support team had not been at Pride this weekend, the number of attendees who could have been traumatized would have been substantial due to Trinity Works’ deceptive tactics.”

Trinity Works’ tactics were indeed deceptive. When TheColu.mn approached the evangelical outreach teams, they refused to acknowledge Trinity Works or the mission to encourage LGBT people to leave “the lifestyle.”

Some of the outreach workers posed as medics and evangelized to people who sought assistance.

The Trinity Works group created fliers to mimic those being handed out by OutFront to warn the community about the groups efforts to evangelize. 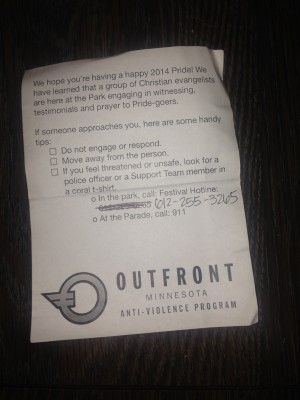 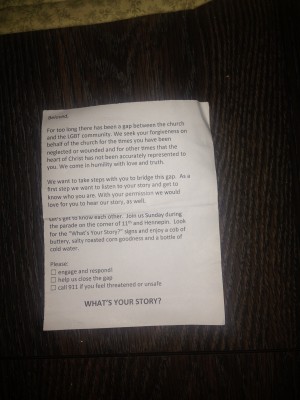 Trinity Works held a corn feed at 11th Street and Hennepin Avenue along the Pride parade route. According to OutFront, the support team had to counsel dozens who mistakenly thought it was part of Pride activities. “Pride-goers who went in, assuming it was LGBTQ-friendly, were surrounded by Trinity works people who said they would burn in hell because of their sexual orientation,” OutFront’s Monica Meyer said in a statement. “Our support team counseled more than a dozen people who unknowingly went in and left the corn feed shaken, crying and traumatized.” 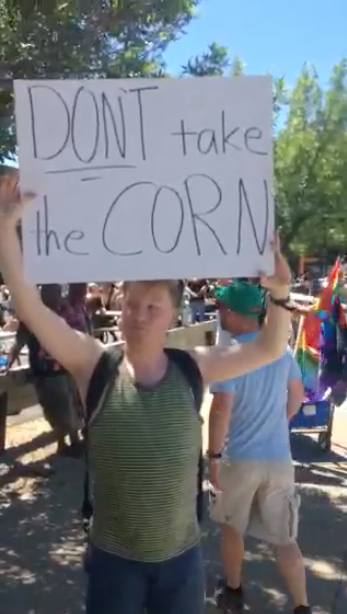 Trinity Works had outreach workers stationed at the Pride parade with brown t-shirts that read, “What’s Your Story?” People were invited to come inside the corn feed to have corn and water, but when they sat down to eat, two Trinity Works outreach workers would hover over asking them about Jesus and being LGBT. 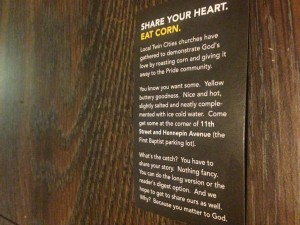 Participants of the Trinity Works’ outreach campaign have been celebrating by posting photos of people they claim to have converted during Pride.

The group claims it will return in 2015 with an even larger effort.