A group that fought against safe schools legislation in Minnesota is raising money to punish lawmakers who voted for the anti-bullying bill.

In spring 2014, Minnesota lawmakers passed the Safe and Supportive Minnesota Schools Act, a bill that emboldened Minnesota’s anti-bullying laws — which were at just 37 words. The act created a comprehensive anti-bullying prevention and reporting system in Minnesota and provided protections for all students, including LGBT students who were specifically mentioned in the new law.

Now, an anti-LGBT group has planned an event to raise funds to punish the lawmakers who passed the bill and to repeal the new law. The Minnesota Child Protection League is hosting a fundraising dinner on Saturday, Sept. 20 at the Minneapolis Club. The group has tapped Matt Barber as one of the keynote speakers. Barber has a history of demonizing the LGBT community, including calling for the reinstatement of sodomy laws.

The fundraiser is devoted to Child Protection League Action, the group’s political arm which aims to unseat legislators that voted for the Safe and Supportive Minnesota Schools Act.

Also speaking will be Lou Pelletier, whose parental rights were taken away by the state of Massachusetts when he and his wife we accused of medical child abuse. Rep. Michele Bachmann will serve as master of ceremonies.

Already, a number of Republicans have signed on to attend. Rep. Sondra Erickson or Princeton, Sen. Dan Hall of Burnsville, and Rep. Kathy Lohmer of Stillwater have RSVPed, according to the event’s Facebook Page. Sen. Roger Chamberlain of Lino Lakes is a “maybe.”

“All house members in Minnesota are up for reelection in the fall and we will be doing everything that we can educate the public about who took these votes in favor,” MNCPL spokeswoman Michele Lentz told AM 1100 The Flag earlier this year. She said the goal of CPL Action “is to start holding legislators accountable for votes they take that that betray children such as this vote for the Safe and Supportive Minnesota Schools Act.”

The group has claimed that passing anti-bullying legislation was a “war on children.” Indeed, the group’s event in September is called “The Raging War on Kids: Launching the Resistance.” 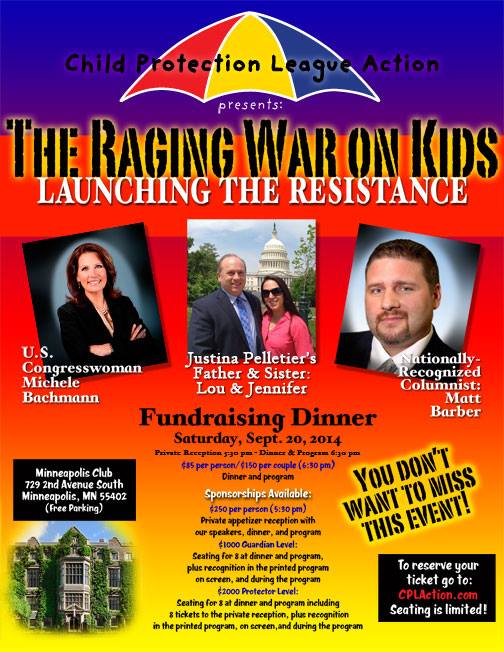 The group’s keynote speaker, Matt Barber, has been openly hostile to LGBT rights, even suggesting that sodomy should be criminalized.

Barber is the Associate Dean for Career and Professional Development at Liberty University which was founded by the Rev. Jerry Falwell. He’s listed on GLAAD’s Commentator Accountability Project which aims to educate the media about anti-LGBT pundits.

To that end, I’m very concerned with the Supreme Court’s recent history of radically redefining that which cannot be redefined. Though examples abound, I’m thinking specifically, as concerns the topic at hand, of the Court’s 2003 holding in Lawrence v. Texas.
In Lawrence, the liberal majority, for the first time in history, radically redefined male-on-male sodomy – hitherto classified “a crime against nature” – as a “constitutional right.”

He expressed a similar sentiment in a 2012 piece for WorldNetDaily:

“This line of argument is directly from the homosexual activist playbook – the rationale adopted by the majority in the landmark Lawrence v. Texas case. In Lawrence, the U.S. Supreme Court manufactured, for the first time in history, a constitutional “right” for men to sodomize each other.”

Barber has written that God will destroy America because of LGBT rights: “Either way, God’s “due penalty” is non-discriminating. America’s official endorsement of “gay marriage,” “gay pride,” homosexualist indoctrination in our schools, “transgender” bathroom bills and bans on counseling to help with unwanted same-sex attraction will not end well. Ask the Romans.”

He’s defended laws in Uganda that are used to imprison people who are LGBT. He’s said that the LGBT community “swarm[ed] in like a horde of locusts” and “homosexualized the Boy Scouts.”

He’s been a prolific tweeter about sodomy:

Here’s a mashup of some of Barber’s anti-LGBT statements:

Barber will share the stage with Rep. Michele Bachmann, a longtime opponent of LGBT rights. Last week, she told a Christian radio show in Ohio that the LGBT community wants to “prey on children sexually.”