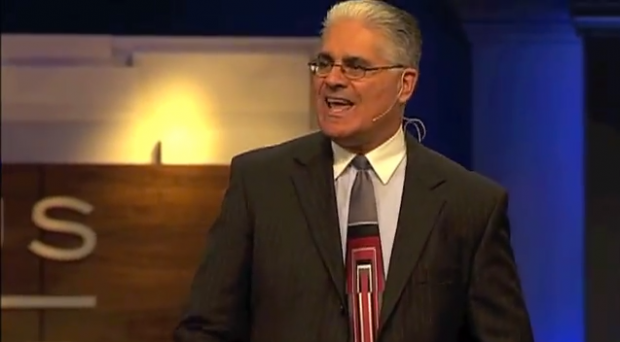 The Safe and Supportive Minnesota Schools Act aims to curb bullying and beef up Minnesota’s laws on the topic which currently stand at a paltry 37 words. While the bill is supported by a broad coalition of groups, conservative pastors in the state have been using some strange arguments to rally opposition.

Rev. Dale Witherington has been speaking to faith-based audiences about the bill. He heads up the Minnesota chapter of Capitol Commission, based in North Carolina.

Capitol Commission’s mission is to “reach the Capitol community for Christ, one person at a time, to disciple them, and to prepare them for a lifetime of ministry, wherever God chooses to place them.” Witherington’s role is to minister to legislators. And his group has gotten some support from the Republicans.

Witherington was most recently at Living Word Christian Center in Brooklyn Park. The church has made the news before because of its endorsement of Bachmann in 2006, its former relationship with Bradlee Dean, and its current relationship with Minnesota’s ex-gay movement. The church’s pastor, Mac Hammond, used to have an hour long Sunday morning program on Kare 11.

At his late-January appearance Living Word, Witherington made a lot of claims about the bill, mainly cribbed from conservative, anti-gay websites and debunked conspiracy theories.

One of the more interesting portions of Witherington’s talk was about a secret society that has 45 goals to make America into a godless nation and how the safe schools bill, tax increases, unionization of child care and gay marriage all play into that plan.

I have been studying not just this bill, but I have put in countless hours since last May because of the three bills that passed last session. And this particular bill that we’re about to deal with and the study that we’ve done through all kinds of sources — My opinion — I’m going to give you my opinion about something here before I go into the bill — I can trace those three bills that passed. Now those three bills were the same-sex marriage bill, the were they attempt to privatize or to unionize private child day care and the tax bill those three and this bill which is called HF826 those four bills I can tie directly to 18 out of 45 stated goals from particular intentional groups of people in this country whose desire is to turn us into a godless society. so while this bill by itself on its own merits is significant, its tied to the rest of an intentional agenda to me is almost even greater.

In his appearance at Living Word Christian Center, Witherington doesn’t state where he got the list of 45 goals or who the “intentional groups” of godless people are, but in a radio interview last fall promoting the Minnesota Child Protection League, he offered some clues.

I came across, in my research, a document that anybody can get I just refer to it —
45 declared goals of what I would call creating a godless society.

[radio host]: okay and this list is how old?

Witherington: It was put into writing in 1963.

Well, of those 45 goals — I’m going to rip through a few of them real quick. Capture one or both of the political parties in the United States.

[radio host]: this is how to have a godless society?

Witherington: In fact one man who helped put this together said, ‘My object in life is to dethrone God and destroy capitalism.’ Another man said — and I’m going to be kind of paraphrase ’cause I don’t have the quote in front of me — the heart, the strength, the resiliency of the american culture is its morality, its religion and its patriotism. If we can infiltrate all three and tear those down, America will collapse from within.

So out of those statements come those 45 goals. One: Capture one or both political parties in the United States. Get control of the schools. Eliminate all laws governing obscenity by calling them censorship and the violation of free speech and freedom of the press. Break down cultural standards of morality by promoting pornography and obscenity in books, magazines, motion pictures and radio, and TV. Present homosexuality, degeneracy, promiscuity as normal, natural, and healthy. Infiltrate the churches — and since your audience is primary Christian church going audience — infiltrate the churches and replace revealed religion with social religion. Discredit the Bible. Emphasize the need for intellectual maturity which does not need that religious crutch. Eliminate prayer or any phase of religion in the schools on the grounds that it violates the principle of separation of church and state. Support any godless movement to give centralized control over any part of culture, education, social agencies, welfare programs, mental health clinics, etc. Transfer some of the powers of arrest from police to social agencies. Treat all behavioral problems as psychiatric disorders which no one but psychiatrists can understand or treat, Dominate the psychiatric profession and use mental health laws as a means of gaining coercive control over those who oppose godless goals. Discredit the family as an institution and encourage promiscuity and easy divorce. Emphasize the need to raise children away from the negative influence of parents. Attribute prejudices, mental blocks, and retarding of children to suppressive influence of parents.

Witherington doesn’t mention it, but he was reading from the Naked Communist — only he had substituted the word ‘godless’ for each mention of the word ‘Communist.’ The Naked Communist was a book by a right-wing Mormon and disgraced former police officer in Salt Lake City who fancied himself an expert in Communism. His book has largely faded from history with the demise of the Cold War. But, in the late-2000s, it saw a revival with Tea Party groups, gun advocates, and religious right organizations after Glenn Beck began to plug the book any chance he got. Beck’s take was that the 45-goals mirror what he views is happening to America.

Witherington then went on to say that that is what is occurring in California with expanding rights for transgender and gender nonconforming youth.

Despite that assertion, the safe schools bill does not deal with gender identification and use of facilities.

Witherington went on to relay where listeners might go to learn more.

“So, where do you go to get some of this data? One new website that I would recommend is the Minnesota Child Protection League. There’ a tremendous amount of resources on that website that deals with this specific issue and gives all kinds of research all kind of data and will point you to other places to go to accumulate the information you want.”


Back at Living Word Christian Center, Witherington laid out much of the same claims that the safe schools bill will usher pornography into the classroom (hint: it doesn’t actually do that).

“Teachers you are not exempt there’s going to be material in here that you are going to be forced to teach that is morally offensive, pornographic, and obscene,” he claimed. “Teachers if you don’t teach it if you don’t comply you could be threatened with the same remediation mental health counseling and loss of license.”

He recalled a conversation with his adult son about the safe schools bill. “He said, ‘Dad if this is really true, if what you are telling me is true, pedophiles are going to start applying for the same civil rights status in America just as the gay and lesbian and bi and trans community has done.'” Witherington told the audience. “And of course, the very next day, I got the email that in Colorado a group of pedophiles have applied for civil right status.

The church audience gasped and moaned in horror.

Witherington didn’t cite his source, but it appears to be from an article that made the round among anti-gay conservatives. That article was from the Greeley Gazette (which also calls itself the Northern Colorado Gazette) and appears to be a mix of anti-gay conspiracy theories and anti-Obama rhetoric.

He then said that some people think that the Minnesota Child Protection League, the group he has been promoting, is “just a far right group that is against the LGBT lifestyle,” but that’s not true he said.

On the Bible’s condemnation of homosexuality, he said, “In the same list there are orientations of lust and adultery of lying of cheating of stealing of any number of things and all of them are called sin according to god. the issue is every human being on the planet is born with an orientation that we would refer to as human nature and it is a sin nature.”

“We are not against anybody. We are for everybody finding the right relationship with god through Jesus Christ and not letting any particular orientation get in the way.”

He used the same argument that Republicans have used to oppose the bill: religious children will be labeled bullies for criticizing LGBT family structures.

“In math class, it may say little Sally is going to the grocery store with her two daddies, and little Bobby says to teacher, ‘Well, excuse me. In my house and my church I’m taught that a family has got a mommy and a daddy.’ And right away little Bobby his going to be removed from class as a bully because he’s caused emotional distress in Sally,” Witherington said.

“Here’s my question: What kind of emotional distress did we cause in Bobby because he got removed from class, because he said, ‘I believe that we are supposed to have a mommy and a daddy.’ Where does that come from?”

“We must not only accept any lifestyle that is anti-biblical, we must be affirming and nurturing of it.”

“No way” exclaims a parishioner