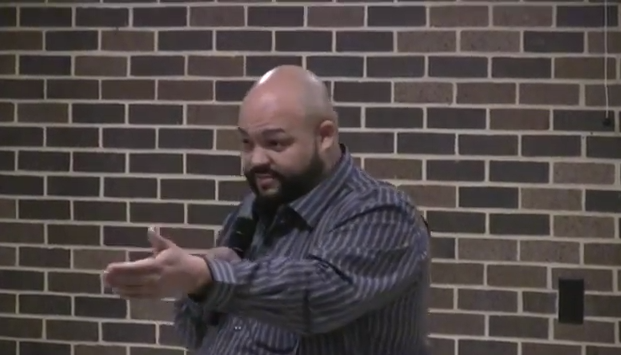 As the legislative session nears, Minnesota’s conservatives are using increasingly harsh rhetoric in opposition to a bill aimed at curbing school bullying. The Safe and Supportive Minnesota Schools Act would beef up Minnesota’s anti-bullying laws, currently deemed one of the weakest in the nation.

The religious right and Tea Party activists have teamed up to oppose the bill, primarily because of protections for LGBT students contained in the bill. Conservative Christian activists are concerned that if the bill becomes law, labeling LGBT people as sinners, speaking out against the rights of LGBT students, or objecting to classroom content that isn’t derogatory towards the LGBT community could be considered bullying.

(Check out TheColu.mn’s ongoing coverage of the safe schools bill and the groups opposing it)

At a meeting of the Rochester Tea Party Patriots in late-January, opponents of a safe schools bill rallied the group against the bill.

“Minnesota’s been a state in this union for 155 years. Are we really to believe we are just now, in 2014, just now doing something about this?” he said.

“The folks who are pushing this primarily are the same folks who pushed for the change in statutes last session that enabled us to have gay marriage in this state.”

He said, “The objective here is to single out particular protected classes and give them a leg up in the social discourse by actually making it against policy and punishable through formative discipline to change a child into something else to believe something that is politically incorrect.”

He said the bill was “unfunded, unfair and unsafe” a direct quote from the Minnesota Child Protection League, a group of anti-LGBT activists formed to defeat the bill.

“This is going to create a climate of terror,” he said.

Hudson is a contributor at conservative commentary website PJ Media, and True North, a blog for Minnesota conservatives.

Hudson’s been speaking out against the bill at least since October. Early that month, he told radio host Sue Jeffers what he thinks the bill is really about — making it illegal to be a Christian.

So, I’m a Christian unapologetically, my wife and I took our two sons, my youngest one is brand spankin’ new. He’s almost four months old. In fact, he probably just turned four months old. We took both our sons and took them before our congregation and dedicated them to Christ and going through that process I was thinking to myself it’s pretty routine for Christian parents to do. It happens week after week at congregations from coast to coast and probably no one up to this point as paid any mind to any sort of legal consequence for making that commitment for saying, “I’m going to bring — me in my house, we serve the Lord — I’m going to bring up my kids in this faith and teach them these principles but now, with the bullying bill looming and what happened last legislative session [marriage equality], the combination, the incrementalism…

Hudson has been touring the state with the Minnesota Child Protection League since October, though its unclear whether he is a part of the group.

At the Rochester Tea Party Patriots meeting, Julie Quist, a board member of MNCPL, spoke after Hudson.

The bill, Quist said, “introduces controversial and sexually explicit course material throughout all classes to accustom student to various forms of sexual diversity. That is the strategy for stopping bullying. We do not think that is the appropriate strategy to stopping bullying they talk about age app material

She continued, “Whenever you talk about age appropriate material, you’re talking about controversial sexual materials. Some of the materials you will see in this [MNCPL] DVD, they are quite offensive and we wouldn’t show for children.”

She added, “Schools are exempt by the way from obscenity laws. Schools can show children things that are illegal for other people to show children.”

Despite Quist’s claims, the bill does not contain the words “age appropriate” nor mention what curriculum materials schools should use to combat bullying.