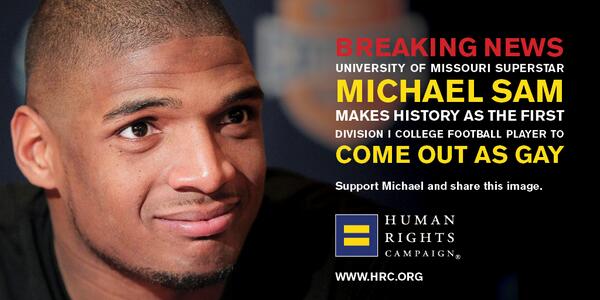 Vikings General Manager Rick Spielman told Sports Illustrated on Friday that a player’s sexual orientation “shouldn’t matter” when it comes to the draft, and that media attention around the subject isn’t something the team is concerned about.

Spielman made his comments after Michael Sams announced he is gay in early February. Sams, one of the top defensive players in the country, could become the first openly gay player if he is selected in the upcoming NFL draft.

‘There’s always going to be that media attention. Brett Favre when he came here was media attention,” Spielman told Sports Illustrated. ”The NFL regardless, you’re going to have media attention and that’s part of the process, to deal with it. But any player that comes in regardless of religion, race, sexual orientation and all of that stuff, it’s going to be an environment where we’re going to make sure they can thrive as a football player.”

”I don’t care if a guy has three heads. Black, white, purple, green. If we got a guy that can help you win football games, it shouldn’t matter and it doesn’t here in this building,” Spielman said. ”I know that we will make sure that our culture is created where he could fit in to our locker room.”

The culture of the Vikings locker room was called into question in early January when former punter Chris Kluwe made allegation of rampant homophobia within the Vikings organization. Kluwe’s specifically alleged that Vikings special teams coach Mike Priefer said, “We should round up all the gays, send them to an island, and then nuke it until it glows,” and that Priefer told Kluwe to stop his outspoken — and at times controversial — advocacy of marriage equality.

When the Vikings announced that the team had retained Priefer for the upcoming season, Kluwe’s attorney said a lawsuit was being considered.