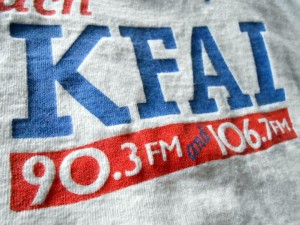 Fresh Fruit got its start on May 11, 1978, and has operated consistently and under the same name ever since. It started as part of the Fresh Fruit Collective 1977-78 which was comprised of Ted Faigle, Mark Matthiessen (who was also called Maya), Richard MacDougall (who was also called Shannon), Kirk Hoffmeier (who died in 1991).

It was billed in the late 1970s as “the Upper-Midwest’s only gay radio show.”

“We are the longest running, not the oldest, not the first,” host Dixie Treichel told listeners. She produced the documentary and is planning a longer version in the future.

The audio documentary can be heard on the KFAI website and will soon be archived at the AMPERS and Public Radio Exchange websites.

Fresh Fruit continues the 35-year tradition every Thursday at 7pm on KFAI at 90.3 FM in Minneapolis and 106.7 FM in St. Paul.