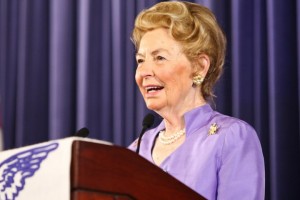 Octogenarian religious right leader Phyllis Schlafly is headed to Minnesota to give a speech on Oct. 10. She’s the guest of Minnesota Eagle Forum, a local affiliate of her national Eagle Forum. Schlafly has made a name for herself over the years as a fierce opponent of the Equal Rights Amendment, a constitutional amendment guaranteeing equal rights for amendment, and her opposition to rights for LGBT Americans.

Schlafly was in Minnesota in 2012 for a meet and greet with Republican candidates for office. Those in attendance included current members of the Minnesota Legislature including Rep. Matt Dean of Dellwood, Sen. Roger Chamberlain of Lino Lakes, and Ramsey County Commissioner Blake Huffman. Also attending were Tony Hernandez who ran against Rep. Betty McCollum, and Sue Jeffers who ran unsuccessfully as a Ramsey County Commissioner.

A recent email update from Eagle Forum mentions that she “is working to get rid of Sanctuary Cities in MN.” Sanctuary cities are cities that don’t allow local law enforcement to enforce federal immigration laws.

For only $40, you can hear Schlafly speak at Jimmy’s Banquet Hall
1132 E. County Road E in Vadnais Heights.

Schlafly is known for her virulently anti-gay (despite having a gay son), anti-women’s rights, and anti-immigrant stances. People for the American Way’s Right Wing Watch has documented Schlafly’s statements, and over just the last few months, her statements have raised some eyebrows.

Recently, Schlafly said that she has a problem with gays. “The problem is they are trying to make us respect them, and that’s an interference with what we believe.” “I think same-sex marriage would be a terrible mistake,” she adds. “I don’t think there are any good arguments for it.”

Earlier this year, she urged the RNC to reaffirm opposition to same-sex marriage.

On the Supreme Court decision striking down much of the Defense of Marriage Act, Schlafly said of Justice Kennedy:

Well, I was extremely offended at all the nasty names he called us. I just think it’s so inappropriate, unprecedented and really nasty for the justice to say that the reason DOMA, the Defense of Marriage Act, was passed, and those who stand up for traditional marriage is that they have animus against gays, they want to deny them equal dignity, that we want to brand them as unworthy, we want to humiliate their children, we have a hateful desire to harm a politically unpopular group. I just think, I feel personally insulted by what Justice Kennedy said. I don’t think that’s true, the idea that anybody who stood up for traditional marriage is guilty of all that hate in his heart is just outrageous.

She’s well-versed in the homosexual agenda: “Well, I do think that the main goal of the homosexuals is to silence any criticism. Most of them aren’t interested in getting married. But I think that’s what they want to do, and they’re starting out by trying it in the schools.”

She thinks that gays are anti-Judeo-Christian: “If the pro-homosexual rights forces win, that which is natural to the human race —marriage — is destroyed, and our venerable Constitution and legal tradition are slammed by Humanistic forces wanting to reconstruct American law and society on an anti-Judeo-Christian foundation.”

She made the claim that Latinos don’t “have any Republican inclinations at all” because “they’re running an illegitimacy rate that’s just about the same as the blacks are.”

She said that the Bible does not support laws like the Dream Act or amnesty for undocumented immigrants. “Scripture is clear on many things, but a sovereign nation’s immigration policy is not one of them. There is no biblical mandate for mass Amnesty for illegal aliens.”

She said pathways to citizenship for undocumented immigrants would be “suicide for the Republican Party because they’re going to vote Democratic… because they come from a country where there’s no tradition or expectation of limited government” and “think government should be there to give orders and solve their problems and give them a handout when they need it.”

She made the insinuation that men are unfairly blamed for sexual assault in the military. “Military women are already complaining about increased sexual assaults, and of course those problems will skyrocket. Only men will be deemed at fault because it is feminist ideology that men are innately batterers and women are victims.”

And, she feels that Sen. Al Franken should be removed from the US Senate. “After all was said and done, Minnesota discovered that 289 convicted felons had voted illegally in Hennepin County, 52 had voted illegally in Ramsey County, and many others voted illegally who were dead or who voted multiple times. That is reason enough for the U.S. Senate to use its constitutional power in Article I, Section 5 to unseat Franken.”