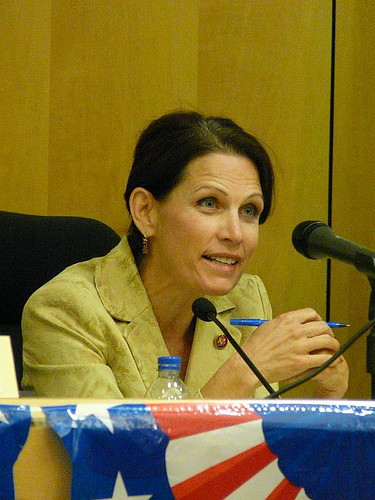 Rep. Michele Bachmann is the only Minnesota sponsor of a bill introduced on Thursday that would protect opponents of marriage equality from claims of discrimination by the federal government. H.R. 3133, the Marriage and Religious Freedom Act, has 60 sponsors, including Bachmann as well as a few Democrats.

In essence, the bill would give a green light to federally funded organizations to discriminate against legally married same-sex couples.

“The Supreme Court’s ruling opens the door for potential legal action against churches, organizations, non-profits or even individuals who hold a religious or moral belief that marriage is defined as a union between one man and one woman,” said a statement from Rep. Raúl Labrador, a Republican from Idaho who authored the bill along with Rep. Steve Scalise (R-LA), Rep. Mike McIntyre (D-NC), and Rep. Dan Lipinski (D-IL).

“Regardless of your ideology, we can all agree about the importance of religious liberty in America,” said Rep. Labrador. “Our bill will protect freedom of conscience for those who believe marriage is the union of one man and one woman. This is not a Republican or Democrat issue. As President Obama said, ‘Americans hold a wide range of views’ on marriage and ‘maintaining our nation’s commitment to religious freedom’ is ‘vital.’ We agree.”

The bill has the clear support of anti-LGBT rights groups. Rep. Labrador lists the United States Conference of Catholic Bishops, the National Organization for Marriage, Heritage Action, Family Research Council, Focus on the Family, The Ethics and Religious Liberty Commission of the Southern Baptist Convention, and Concerned Women for America as groups that have endorsed the bill.

Language of the bill has not yet been released, but Rep. Labrador’s press release noted that it will protect groups that discriminate against legally married same-sex couples by stating that the the federal government cannot:

Deny or revoke an exemption from taxation under Sec. 501 of the IRS Tax Code
Disallow a deduction for Federal tax purposes of any charitable contribution made to or by a person
Deny or withhold any federal benefit
Deny or exclude a person from receiving any federal grant, contract, loan, license, certification, accreditation, employment, or other similar position or status
Otherwise discriminate against any individual organization

Marriage equality supporters are concerned about the bill.

“There is no evidence that federal programs have or would discriminate against people because of their religious beliefs about marriage,” Fred Sainz, a spokesman with the Human Rights Campaign, told the Washington Post. “What is clear, however, is that this legislation would give a free pass to federal workers, recipients of taxpayer-funded grants and others to discriminate against lawfully married couples.”

Evan Wolfson, founder and president of Freedom to Marry, said in a statement on Thursday: “This sweeping Trojan Horse proposal would swallow civil rights laws and subvert constitutional protections, and is a dangerous ‘solution’ to a non-problem. Decades of civil rights struggle, and long experience with both federal and state non-discrimination statutes, have made clear that we don’t need to gut non-discrimination laws to protect true religious freedom, and neither private religious views nor prejudice should get a special license to discriminate in the public sphere.”