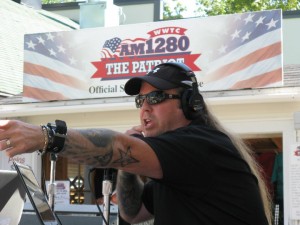 Radio host and front man for anti-gay ministry You Can Run But You Cannot Hide International hosted Byran Fischer of the American Family Association, a group which has been labeled by the Southern Poverty Law Center as a “hate group.” Dean and Fischer argued the case that “homosexuals” were responsible for the rise of the Nazi party in pre-WWII Germany and, by extension, the Holocaust.

Dean has had close associations with Minnesota politicians including Rep. Michele Bachmann and Fischer hosted former Gov. Tim Pawlenty on his radio show in January.

American people don’t know “the connection between homosexuality and the rise of the Nazi party,” Fischer said. “Hitler himself was a active homosexual… a gay prostitute. ”

“[The homosexuals] were willing to do things that he could not get straight soldiers to do in terms of brutality,” he added. “The myth out there is that the Nazi party persecuted homosexuals and it is true that they did but what they did was went after the effeminate homosexuals.”

Dean added, “I’m going to high five everything you are saying.”

Fischer continued, “You can really say the Nazi party would not have been possible without the homosexuals in the Brownshirts.”