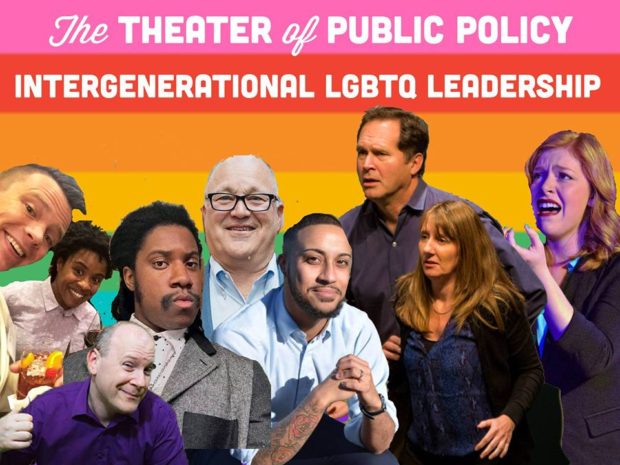 If you’ve never been to a show at the Theater of Public Policy, you should go–soon. This part Town Hall, party comedy show brings conversations about government, policy, and reform to Bryant-Lake Bowl audiences in an accessible and fun format. The theater invites experts in a field related to government, policy, or social justice to the stage to speak on their area of interest, and then the improv cast performs a set based on that. In the first half of the show, the host facilitates a conversation about policy and other important topics between the panelists. The improv cast then takes the stage and creates a set loosely based on that conversation. The second half of the show gives audience members a chance to ask those panelists questions. After some back and forth between the experts and the audience, the improv team goes at it again.

The Theater of Public Policy show I attended was, of course, their LGBTQ+ show entitled We’re Here, We’re Queer, We’re Going to Use a Hashtag. The guest speakers were Councilmember Phillipe Cunningham and Mossier Social Action Program Manager Charlie Rounds. I mention this to give credit to these notable speakers, but the guests do change every week depending on the topic. The night was marketed as an intergenerational conversation, and the improv cast reflected that as well. Topics covered in future weeks are climate change, our national economy, and the death with dignity movement. 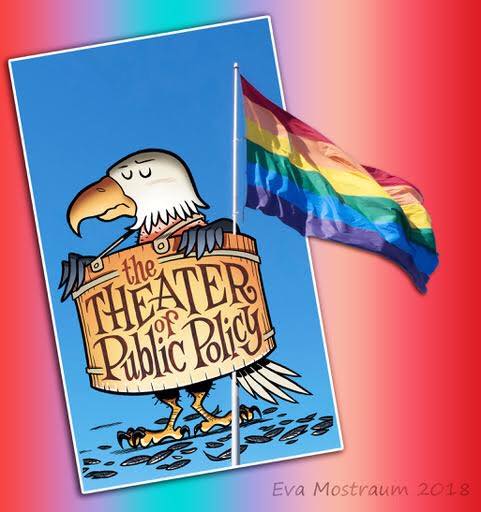 I expected some rough spots in the conversation during We’re Here, We’re Queer, We’re Going to Use a Hashtag. Intergenerational conversations are not easy, nor are conversations about any of the topics the Theatre of Public Policy is presenting this May. I don’t think everyone in the audience was as prepared as I was though, and that’s actually a good thing. There needs to be a place where people like Cunningham can openly call out white supremacy and economic privilege in our movement and community. There needs to be a place that we call into question or our privilege and experiences. There needs to be a place where queer youth can learn about the history and ongoing struggles of our movement and community. I also think it’s important that those things happen in an arts environment, where we know we are safe and we know the laughter is coming. A lot of people will check out of a more intense setting, or just not show up at all, and the Theater of Public Policy doesn’t leave room for either of those options

It is likely that upcoming conversations will get less tense less often. That’s also fine; the primary point of the panel portion of this show is education. Both Cunningham and Rounds taught me some facts and stats that even I didn’t know about our rights movements, and I’m pretty well-versed in all things queer. The Theater of Public Policy also strikes me as a necessary meeting ground and community space for politicos and policy nerds to mingle with the arts community that is consistently doing radical work and vice-versa.

The show itself is a stroke of genius. We need to be educated on these issues and this format really “goes there”, but with the promise of some of the best improvisers in the Twin Cities hitting the stage we never check out. This type of show is ushering in conversations and creating comedy sets that are urgent, now more than ever. The promise of events like this is why I do art in the first place.

Moving into the art of this series, I am always pleasantly surprised when an improv show is not just funny and cathartic but also polished and professional. This show hits all of those marks. The cast rotates out each week, so rather than go into everyone I saw, here’s a link to their larger cast. The cast played beautifully together creating a consistent sense of joviality throughout the show–a difficult thing to do when tackling such intense material. I was impressed with how social justice oriented the improv set stayed too. This cast stayed very conscientious about queer identities and who might be in attendance for the whole show without ever sacrificing the humor we came to the show for. Note to the improv and comedy scenes: it is absolutely, for sure possible to be both hilarious and respectful of marginalized people. The Theater of Public Policy hits it out of the park. As a side note, I am personally a huge fan of musical improv and comedy and this show had no less than three show-stopping numbers created on the spot for us.

It is both difficult and necessary to have events like the Theatre of Public Policy. There aren’t a ton of resources that break down policy for laypeople that those laypeople will show up to. Furthermore, laughter is absolutely critical for navigating difficult things and times. Finding a balance between the two is challenging, but this group does a stellar job.

The Theater of Public Policy is running shows every Monday through the end of May at Bryant-Lake Bowl in Minneapolis. The shows are at 7:00 pm and are done by 8:30. Tickets are $12 in advance and $15 at the door. The Theater of Public Policy also has a podcast that promises to be really wonderful too. You can find out more about this great group (including the cast), their upcoming shows, how to get tickets, and the aforementioned podcast at their website.