Queering the Tarot: The Four of Pentacles 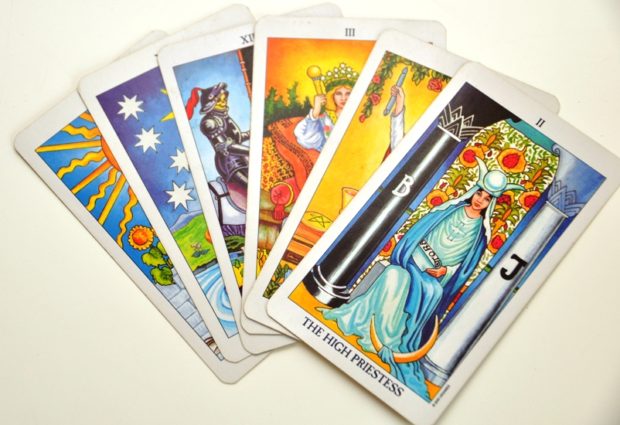 The Four of Pentacles denotes success, but it’s one I’ve always had a hard time connecting with. The figure pictured in a traditional Rider Waite tarot deck is holding on to his coins tightly, refusing to let anyone else touch them–and refusing to take chances or move forward in his own life for fear of losing them. This then is a card about conservatism, and worse yet, stinginess or miserliness. It’s a card that leads to loneliness, and it’s a card that creates a wildly unpleasant, if technically successful, life. This card shows up when someone is overly concerned with the financial part of a career they don’t love, but the most common manifestation I see in clients and friends is more of a metaphor. If this card is about being ungenerous, that doesn’t always just mean money. Most people getting tarot readings are not money-centric to a fault the way that this card indicates, though it has had the traditional applications when querents were asking about their boss, a parent, or a partner where things were turning sour. Most often though, this is a card of holding your hand to close to your chest and refusing to let go of information people close to you may need about your inner workings. It’s very often a card of not being generous of heart or spirit and can indicate a seeker who wants to open their heart but can’t. Much like the traditional figure holds his coins close to his body, if this card is showing up as you or an energy you’re putting out there, it’s showing you that you are holding your mysteries, secrets, or capacity for love too tightly and keeping them too internal.

As LGBTQ+ people, it’s a really common temptation to fall into. We get messages and coding from society around us all the time that the way we love or even the way we are isn’t “right.” After enough messages become internalized, we don’t trust when love (in any form) crosses our path. We hold our hearts tightly in our own hands no matter what your queer community or a potential partner does to earn us opening up a little bit. The nature of this card running through my veins is one of my greatest weaknesses as a human. So I know, and I get it. That fear of being hurt, and not only losing someone we could have loved but proving this hurtful world right about us seeps into how we treat the people who are actually worth our hearts. This card shows up mostly as a warning. “This is what you’re doing. Please stop.” or sometimes more politely “It’s okay to let your guard down now.”

Alternatively, this card often indicates that this is what someone (who isn’t you) in your life is doing or going through. It may not be personal, and if anything they may be desperately trying to let you in. Yet they grip themselves so tightly that you can not find your way; this is not your fault. Unfortunately though, it may not change. You have to decide if those pieces of themselves they are clutching are precious enough to wait for. They may be–but the reality is it may be time to walk away. You’re not a friend or partner’s therapist. This is not your job. You are dealing with someone who likely has years or decades of holding too tightly under their belt, and sometimes it’s better to walk away and work through your own stuff.

I don’t want to overlook the elements of control in the Four of Pentacles and how they can manifest negatively in our lives too. Sometimes people hold on to themselves too tightly, but sometimes they hold on to others too tightly. There are times when this is okay. You want someone in your life who’s going to fight for you and your love, but this card isn’t that. There are times when our cards about control become fun explorations into BDSM and kink, but this card isn’t that either. This card is someone who may need to know your every move and who may need to control every facet of how the relationship is going. This card is someone who ultimately wants to control you in an overbearing, abrasive, and abusive way. Abuse is not uncommon in queer relationships, and it’s unfortunately all too common for bisexual and transgender people to be abused by their partners. Furthermore, there often aren’t resources on where to turn to leave those relationships. As a community, we are even more scared than mainstream society to call out abuse. We don’t want people looking at our relationships as bad or our identity as reason for abuse. So we keep quiet, and we don’t call out. That is, to put it mildly, a mistake. I digress a bit–other cards will let us know when it’s time to take a stand publicly. The Four of Pentacles’ job is to urge us to leave that partner/friend/family member. Immediately.

The Four of Pentacles is a card that I’ve seen straight, cisgender readers read positively. In a spiritual community, this has always confused me. Materialism is, generally speaking, not good. I’m not someone who doesn’t value my work, and I absolutely see spiritual work as real work. Yet if we’re hustling for the money to the point that we lose our hearts, what’s the point? Why take a spiritual path at all? I love money–but it’s not why I do what I do. As an LGBTQ+ person, I’ve tried to put a spin on it regarding resource building and sharing, but it still comes up negative. Specifically, it comes up as someone who has the resources to lift our community up but won’t share or contribute. Remember why we’re even queering the tarot though. As marginalized people, our point of view is going to be much different than someone else’s. Plus my whole thesis as a tarot reader is that every card is different to every person. If you can’t turn the wealth yet stinginess, the success yet coldness of the Four of Pentacles into something good, don’t. Question the things we place on pedestals as a society, and know that for every strictly negative card in the deck, there’s seven more cards ready to promise you healing and adventure.

One response to “Queering the Tarot: The Four of Pentacles”