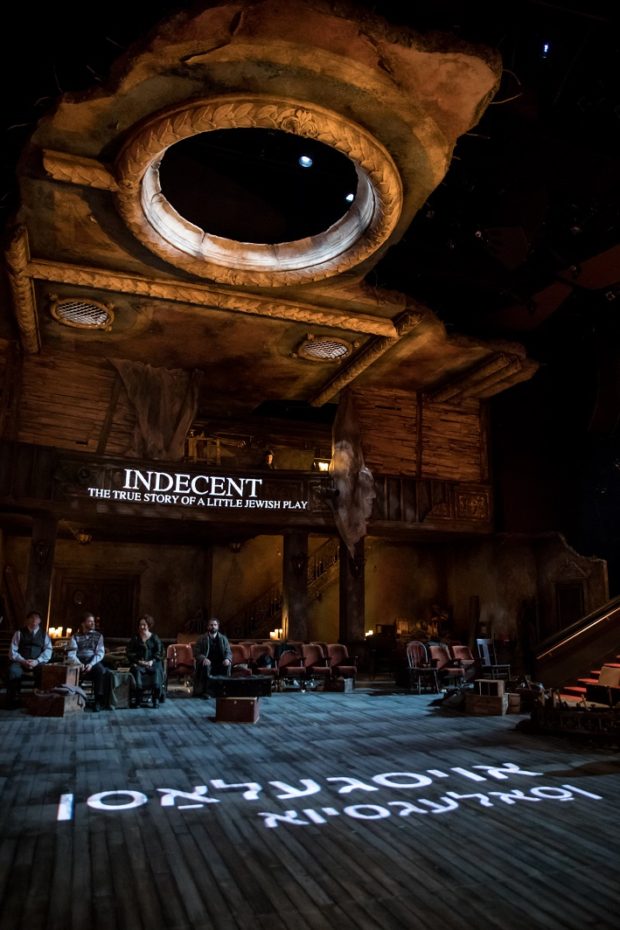 Paula Vogel’s Indecent is a very good play, and the Guthrie’s production is top notch. This Pulitzer Prize winning play is based on a true story about censorship and brilliantly ties together the way censorship leads to further fascist action. The play centers around the real life writer Sholem Asch, and his play God of Vengeance that came under fire for “indecency” and “obscenity” leading up and during the events of the Holocaust and World War II. The show features a small cast playing multiple characters, a band that sits right on the stage the whole time, and a couple of theatre tricks that tickled even me, as cynical as I am about spectacle on stage.

I frequently feel like acting ensembles at the Guthrie mix performance styles in ways that make a play harder to stay pulled into, and often highlight one Very Big Talent to the detriment of the rest of the cast. Indecent does not do any of that in spite of having a number of Very Big Talents in the cast, most notably Sally Wingert blending beautifully into her ensemble role. I am also not someone who is impressed by Big Impressive Sets alone, but Indecent uses the thrust beautifully, creating a singular set that is believable as several different stages, an attic, a living room, and more. The set contributes a lot to the show thematically as the carefully planned look of ruin and debris highlights the despair that the world is sinking into. Paula Vogel is obviously an immensely talented writer, and has long been one of my favorite playwrights. For the most part, she outdoes herself with Indecent. The conception and delivery of this piece from Director Wendy C. Goldberg is nothing short of exceptional too. There is an “X” factor missing from a lot of plays: love and care of the piece and the craft itself. Goldberg and the cast exhibit that tenfold, and create a really stunning and marvelous night at the Guthrie. 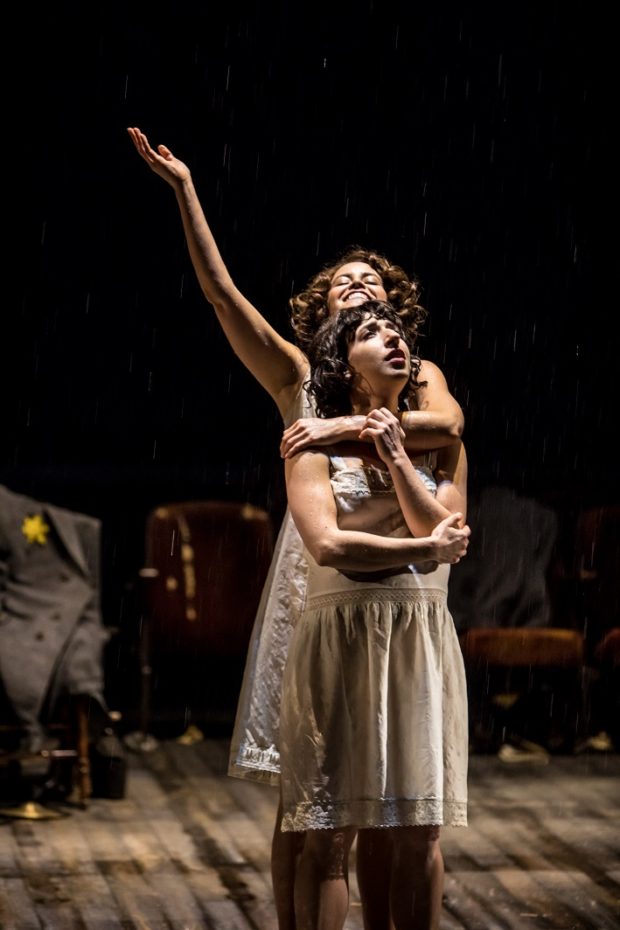 All of that being said, Indecent is not a perfect play. Culturally, I am frustrated that we don’t get to hear more from Jewish culture and artists beyond the Holocaust at mainstream arts venues. The events of this time period are undeniably heinous, and still we have people who deny them or even want to go through this again. That’s atrocious. Yet the Holocaust and the events leading up to it are not the only times Jewish people have been discriminated against, silenced, and oppressed. While Indecent is an exceptional piece of theatre, there are other exceptional plays about anti-Semitism and Jewish oppression too that do not take place prior to and during World War II. This is not a critique of this specific institution and it certainly is not a critique of Indecent, but I am concerned about a culture that struggles to find parallels and humanity in stories that we don’t know yet. What’s most uncomfortable about Indecent is that there are a couple of scenes where both the open queerness of pre-Hitler Germany and some of the Jewish stereotypes are played for laughs to an audience full of people who are likely not those things. It’s a really good play, but a couple of scenes seem really out of place as they inspire little but laughter at marginalized character’s expenses.

I spoke with a local Jewish queer actor, who not only clarified some of her own thoughts around the aforementioned concerns we both had of the show, but brought up that for a show marketed largely to the queer community, the actual queer characters are fairly sidelined. God of Vengeance features two lesbian leads, and there are LGBTQ+ characters in Indecent beyond that, but they aren’t the main focus of the play. That’s definitely not wrong, and there is a lot The Column readers will still get out of the show. Many of the performers and crew, and certainly Vogel herself are LGBTQ+, and their talent is immense. That fact leaves me wanting even more from the queer storylines in the play that do get buried though, and I do want the play to dig even deeper than it does to tie these various forms of oppression together.

Even so, what Vogel does with this source material is great. I have a personal unpopular opinion about plays about plays which is, basically, that I don’t like them. Nonetheless, Indecent plays with this convention in a way that subverts it, creating instead a beautiful story about love, hope, and heartbreak in a time of censorship that leads to unspeakable terror. The show is not about a play, it centers around a play. Non-standard theatre audiences will still find this show accessible, and because the play features music as well the show is enjoyable and palatable to most, even as it starts hitting on harder topics. This script is incredibly smart in ways I am still mulling over. It really refreshes and reinvents a lot of standard theatrical format, and it’s a play I am still thinking about a week later.

We don’t talk nearly enough about how censorship is often the first step towards total fascism and tyranny, and this show covers that topic expertly with this based-on-a-true-story rooted in that very subject. We also see America’s complacency in the horrors that happen in the rest of the world, as it’s the USA where the actors in God of Vengeance are tried in court. This is a very unusual and necessary look at world history, as our history books like to paint us as the heroes in this particular series of events. In Indecent we see the cast of characters go from eager and excited about a show to victims of actual genocide in roughly ninety minutes, and it is a powerful and important message about how quickly things spiral out of control and who’s to blame when they do. While I would like to see more from the plethora of Jewish stories available to us, this show’s focus on what leads to things like the Holocaust and its original point of view regarding those events is still refreshing. While not perfect, this show leaves us with plenty to chew on and mull over for weeks after the fact. That’s art, warts and all, and I’m grateful to see The Guthrie taking on such powerful work.

If you’d like to see Indecent, it is running daily at The Guthrie through March 24th, with the exception of Mondays. Tickets are available at the Guthrie’s website here.