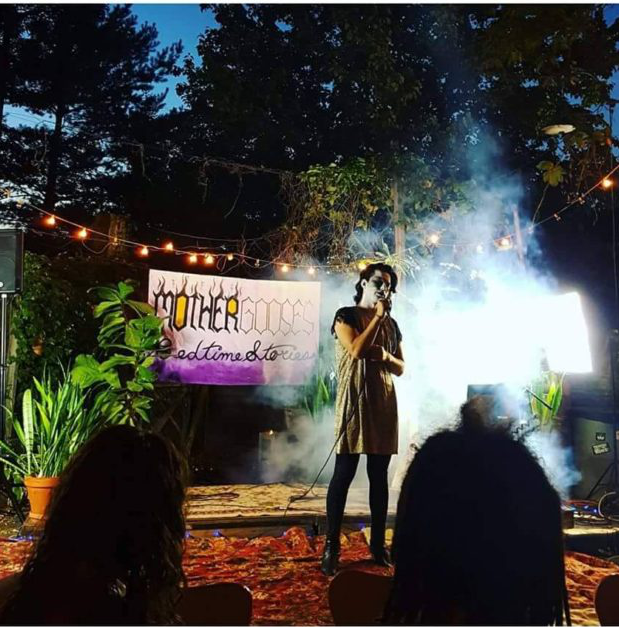 Queer artists in the Twin Cities are all too familiar with the critical dearth of affordable, accessible space to develop and showcase the radical work that is our trademark. As we are pushed to the margins, we affirm with greater conviction that our place is actually in the vanguard. We do this by entrenching ourselves again in the DIY. We see this as a phase in a cycle that we will not simply outlast, but rather are prepared to instigate and ride whatever the next wave may be as culture makers and prophets.

One place to catch a taste of what is to come is in the work of Xochi de la Luna: independent producer, musician, emcee, comic and performance artist. Xochi is currently best known as the creator and curator of Mother Goose’s Bedtime Stories, a monthly show with a mission to push art in new directions, while giving under-represented and new artists a platform to be seen and heard in a fantastical environment. Part showcase, part variety show and part theatrical production, the event is hosted by the interdimensional being known as “The Real Mother Goose”, who interviews each act for the audiences’ entertainment and education. Mother Goose also provides updates on the ongoing narrative arc of her travels though the universe’s infinite dimensions, her ongoing conflict with the Skeleton Witch and other parables.

Xochi also hosts Vector 9 at least monthly at Dead Media–as nemself, also known as the earthly conduit of The Real Mother Goose–and fronts a newly formed band called La Curandera & The Ritual. When asked what it’s like to be to be an independent producer right now, ne of course lists the challenges of finding resources and exposure, but also: “It is very comforting and healing to see an audience that seems to include so many different components of the community. I hope that audience keeps growing and everyone continues to feel that they belong. For everyone to be exposed to each other’s light, and be laughing with one another. That is what feels good.”