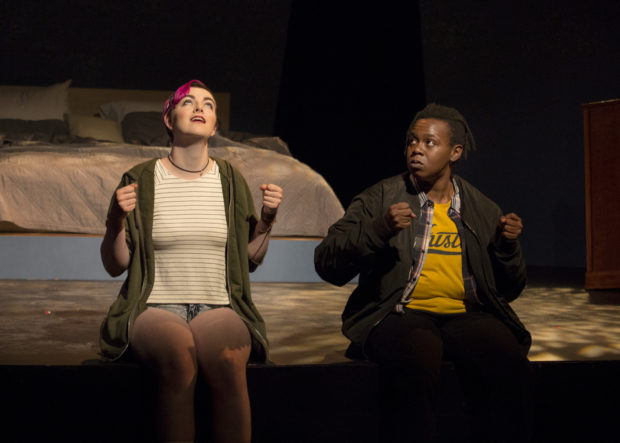 Ballast, by Georgette Kelly, has a lot of great stuff packed into a ninety minute show that centers around two couples, each with one transgender and one cisgender partner. 20% Theatre is currently staging a production of Ballast at Mixed Blood Theatre. The show depicts how those characters’ lives end up intersecting as each trans character struggles to find their feet as they are transitioning.

Ballast is so much more than that though. There are a ton of dream sequences that reveal the truth of what the characters are feeling and facing, and a metaphor for flight that starts heavy handed but pays off in the end. There’s a beautiful love story, and hidden in the show’s depths are inspiring messages about coming of age and autonomy. Where Ballast really wins me over is when it shows the raw and unfiltered humanity of every single character, save one or two small roles. This creates characters you may not like and couples you may not root for, but it never sacrifices the voices and issues that are most important.

One of those aforementioned couples is Grace and Zoe, played by Eileen Noonan and Olivia Wilusz. Noonan’s Grace is a pastor that hasn’t had her own church since she came out as transgender and began her transition. Wilusz’ Zoe is her partner who is trying to remain visible as their lives slip from comfortable to unknown.

Noonan’s portrayal of Grace is every bit as nuanced and emotional as I would hope, and her comedic timing gets a few moments to shine too as she grapples with being not just a woman, but a Christian woman for the first time. While Wilusz carries some of the heavier scenes just fine, Grace’s pain comes through in every scene. This is especially clear then the Bishop of her church informs her that there’s nothing written to prevent a transgender pastor, but her open relationship with her wife poses a problem: the church doesn’t allow homosexual church leaders.

To playwright Georgette Kelly’s credit, what could turn into an overwrought crisis of faith instead focuses on a story common to trans people of all sexual identities about maintaining a career in an oppressive field. Another great choice by Kelly is that when Grace and Zoe’s relationship reaches an unavoidable crossroad that they’ve been trying to stave off, it is Grace who makes the final call. While the undertone has been there, her declaration of what she needs comes out of the blue to Zoe, though it shouldn’t. Grace doesn’t falter in who she is or what she needs even then. This is what I love the most about Grace: she is sure of who she is, she just isn’t always sure how to express that and how to live a full life with that. 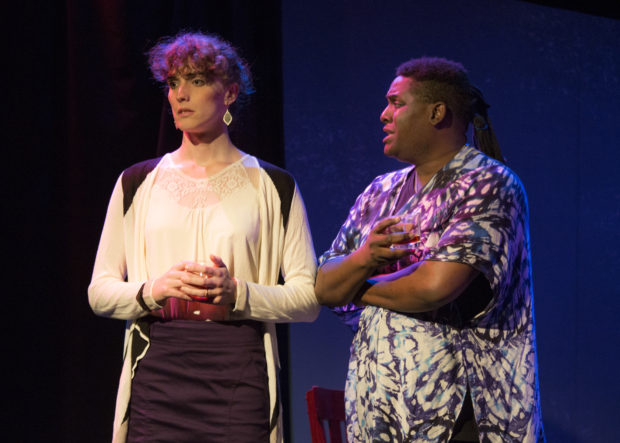 Also beautifully done is a really sweet love story between Xavier, played by Jayden Simmons, and Savannah, played by Piper Quinn. These two actors are incredibly endearing, and when they’re flirting or trying to cheer each other up you’ll grin ear to ear. They also give deep, layered performances as two teenagers who are hurting a lot.

Xavier’s story ends up being one of autonomy too, like Grace’s, and he makes a hard decision you may or may not agree with–with Savannah by his side. Xavier’s struggle runs deep though, and I don’t want to gloss over that because I am so charmed by this couple’s love. An absolutely great portrayal of transgender child and cisgender parent relationships plays out where Xavier’s mom doesn’t disown him or kick him out like the stereotyped version of this story show, but Xavier has to break free and come into his own with people who will let him do that anyway. It’s a messier, more truthful take on that relationship, and one I’ve seen countless friends go through. Xavier’s dreams show an older, more haunted version of himself (maybe) and it’s hard to tell if he ends up running towards or away from that version, but that’s an ambiguity that works well.

While this play is and should largely be about the trans characters, I wanted more concrete information about Savannah’s backstory. Some critics have said she may be the bad influence that others in Xavier’s life think she is, but I didn’t see that. I saw a potentially homeless girl, or at least one with painfully negligent parents, trying to provide a life of fun and adventure for herself and her partner. Without more information about where her family is or what she’s going through though, it’s easy to miss her pain in spite of an almost perfect performance by Piper Quinn. This is offset by the fact that Zoe gets as much if not more stage time than Grace as she grapples with what it means to be a partner to Grace while also being her own person. Having Savannah be more of a mystery (her dream sequences very often focus on her love of Xavier) almost puts her in manic pixie dream girl territory, though director Claire Avitabile and Quinn fight this as much as they can. 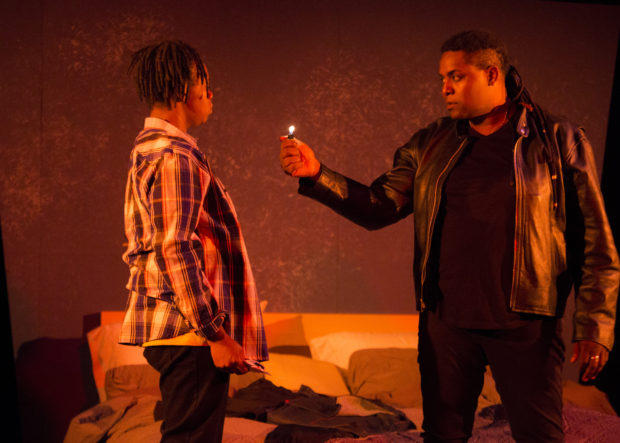 In addition to the performances outlined above, Marcel Michelle plays everyone you want to hate in this story—the bishop who won’t let Grace lead a congregation with a same sex partner and Xavier’s mom, specifically, as well as a one scene comedic relief character named Mrs. Grabowski. She floats between characters seamlessly and seems to relish playing the difficult characters, making their humanity in all of it’s goodness and terror shine through. Zealot Hamm almost steals the show as the Flight Instructor in Zoe’s dreams and as Xavier’s dream figment. They brings that “it factor” that is so hard to define but can make or break characters like this, and they brings it hard. Hamm also plays Tilly, Grace’s transgender friend and almost mentor, with the necessary humor and kindness that doesn’t always seem like kindness (but definitely is). Katherine Engel rounds out the cast as Zoe’s mom and a couple of other small characters. Among that, her portrayal of a little boy is unexpected and awesome, especially offset against Zoe’s old fashioned mom Maureen.

Ballast does struggle to fit all of the necessary characters and stories into the short time frame, and unlike a lot of plays that seem unfinished, it’s unclear what is necessary to mend that. More time could work, but so could more editing. This play shines when it lets the actors melt into their roles instead of hustling between scene changes, so something is needed to encourage more of that. As mentioned earlier, Zoe gets an almost alarming amount of stage time compared to even the transgender characters in the show. When the show finished, I ended up wishing that some of her scenes were shorter or less hyper-focused on herself. Scene changes in general seemed to chop up the overall experience of Ballast, and there were some lighting cues that didn’t quite match what actors were doing (or vice-versa) the night I saw it. Both elements took me out of the story on more than one occasion, but certainly didn’t ruin my viewing of the piece. I saw it the Saturday after opening and energy or pacing or both seemed to drag a little that night. This is actually really common for opening weekend Saturdays, but did cause me to wish the show would hurry up a little in more than one place.

None of those critiques ruins Ballast, and in fact, one of the things that is so great about this show is that it’s messy. It doesn’t end like you think it will or like you want it too, but we do see the main transgender characters reach conclusions you’ll be satisfied by. These are not idealized portrayals of trans stories, but they are realistic and positive. The work and heart poured into this show is one thousand percent worth it in the end, and you’ll feel inspired as an LGBTQ+ audience member when you see these characters find the version of their life that works best for them. The actors alone are worth seeing the show for, as are the stories that do largely focus on trans people. What makes the show “great” instead of merely “worth it” or “good” is the necessary empowerment we as an audience receive in the end. You can have your life your way, you just need to be willing to drop the excess baggage keeping you stuck, and that’s a beautiful and timely message to send audience members home with.

Ballast by Georgette Kelly is being produced by 20% Theatre Company at Mixed Blood Theatre through September 8th. Tickets are sliding scale starting at just $5, and has a couple of ASL-interpreted performances left. Check out those details and more at 20%’s website.