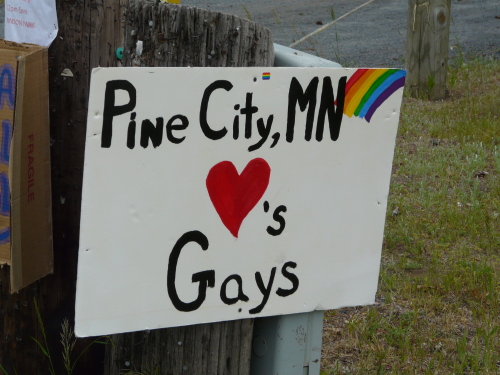 The national debate about gay rights hit home in the small community of Pine City, Minn., on Sunday as residents hosted two dueling picnics in the city of 3,000 people. For the fifth year, lesbian, gay, bisexual and transgender people from east-central Minnesota gathered to celebrate family and community. And for the second year, their neighbors organized a picnic just blocks away opposing gay rights and promoting “family values.”

Several hundred LGBT Minnesotans arrived for food and live music at the VFW hall at Voyageur Park in the north end of town. The theme, “We Are Family,” was a nod to the notion that LGBT people are part of the fabric of the larger Pine City community.

“A family is not only one of inclusion, but of values of hard work, respect for others, love and commitment, along with a sense of belonging to the greater community of East Central Minnesota,” said Don Quaintance one of the picnic organizers.

The event, Pine City Pride, is one of only two known rural LGBT pride events in the country, serving as an important networking and community-building opportunity for LGBT people living in rural Minnesota.

This year same-sex marriage was the hot topic as four states, including Iowa to the south, have made same-sex marriage legal. OutFront Minnesota was at the picnic providing education on — and gathering support for — a campaign to bring marriage equality to Minnesota within the next three years, by which time the state will have a new governor; only days earlier Gov. Tim Pawlenty, who had stymied many efforts to pass LGBT legislation, announced he would not be running again.

“There’s going to be a lot of changes in Minnesota,” said Sen. Rick Olseen, a DFLer who represents the district. “It’s time to be really active and support a governor that supports equality.”

Marty said he’s fighting for full marriage rights for same-sex couples, and nothing less — such as civil unions — would be acceptable.

“I don’t care what [Rep.] Michele Bachmann and her ilk like to call it. We call it gay marriage,” said Marty. “I don’t want to tell anyone else what to call their relationship… A same-sex marriage is not hurting anybody else. And that’s one of the reasons I’m running for governor.”

He added that it took “hateful people like Michele Bachmann” to rally Minnesotans against the LGBT community.

Only four blocks away in Robinson Park, a “pro-family picnic” was being held in response to Pine City Pride.

“The GLBT picnic is being brought in by groups from around the state. If you go to their Facebook group, you can find people asking to be bused in from Minneapolis,” said Abe Mach, pro-family picnic organizer and director of the Pine City Republicans. “These aren’t the values of our community, and we want to make that clear. We do not want to this to become the defining event of our city.”

Mach said on a Facebook page for the event that he sees the LGBT picnic as an assault on Pine City families.

“The attack on traditional family values is coming from radical homosexuals desiring to introduce their lifestyle to kids in order present an alternative to the natural heterosexual lifestyles they are born into,” he told critics. “We simply want to be able to protect our children and families from what we believe to be a negative influence.”

Despite the invective, the pro-family picnic was a subdued affair. Children sang gospel songs and at least one politician spoke.

“We can make them fear this time of year if we send them letters,” he said.

A lone pro-family activist made his way over to the LGBT event. He wielded a large sign that read, “Where will you spend eternity? With God or Satan?” and shouted Bible verses at the crowd.

“We aren’t going to allow their hate to ruin our day. This is the pro-family picnic, not the one on the other side,” he said. “I’m glad to stand with you on this bitterly cold June day. It’s a cold day, but there are a lot of warm hearts. Thanks you for standing up for your community in Pine City.”