Home Feature LGBT rally at the state Capitol on Wednesday 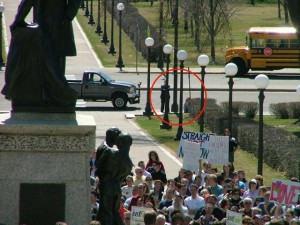 Thousands of LGBT folks and supporters will rally for marriage equality and pro-LGBT legislation at the Minnesota State Capitol on Wednesday. The event will take place at the Capitol lawn from 1 to 2 pm.

“We will be rallying at the Capitol to show legislators that there is strong support for extending legal recognition to same-sex couples and their families by ending discrimination in marriage,” said Amy Johnson, executive director of OutFront Minnesota, in a statement. “Minnesotans know that marriage equality next door in Canada and now Iowa is not a threat to them or their families. In fact, polls show that the majority of Americans support creation of the sorts of legal frameworks and protections for same-sex couples. It is time for Minnesota to do so as well.”

OutFront also noted that since last year’s event, “marriage equality has become a reality in Vermont, New Hampshire, and Washington DC, as well as in places such as Buenos Aires, Argentina, and Mexico City.”

And the event is always a memorable one. Just five years ago, the annual LGBT Lobby Day event drew then-Sen. Michele Bachmann who was unsuccessfully trying to pass a constitutional ban on same-sex marriage. A photographer caught her peering through a row of bushes.