Originally posted on April 8, 2005 at eleventh-avenue-south.com. 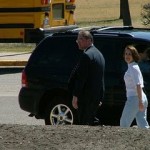 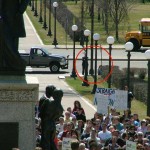 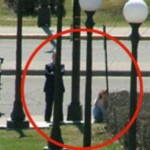 Today Minnesota Senator Michele Bachmann thought it would be fun to circumvent the Senate Committee process and force a floor vote of the amendment to end domestic partnerships, and ban civil unions and same-sex marriage while we were outside rallying for our rights. Even Senate Republicans thought it was in poor taste to try to go around Senate rules on the same day GLBT citizens were making their voice heard. Her move was overwhelmingly defeated:

“The state Senate on Thursday rejected an effort to force a floor vote on a constitutional amendment that would ban gay marriage as thousands of ban opponents rallied outside the Capitol. Sen. Michele Bachmann, the Stillwater Republican who’s led the push for the ban, said Senate Democrats have denied her repeated efforts to get the bill heard. Senate leaders countered that Bachmann, a candidate for the U.S. House, is flouting Senate rules to advance her own political career. At the same time, about 2,500 gays, lesbians and their supporters attended a rally on the Capitol grounds just a few hundred yards away, organized by OutFront Minnesota.” [Star Tribune]

After the move didn’t pan out, Michele took to hiding in the bushes to watch the queers rally. A reader tip:

“I know you’re no fan of Michele. And therefore, you might be
interested in a few pics I took at the JustFair rally on Thursday of
her hiding behind the bushes watching us from afar before I scared her away with the camera.”

Notice the white blouse, light blue trousers, and the bald head of her bodygourd are very similar in all four shots. Bachmann’s cowardly Minnesota Taliban self was COWERING in the bushes.