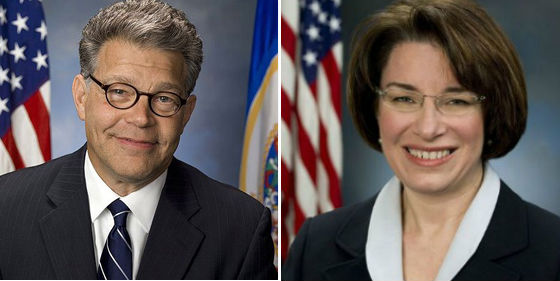 Sens. Amy Klobuchar and Al Franken are among 45 members of the United States Senate urging Secretary of Defense James Mattis to reject President Trump’s tweets calling for a ban on transgender military personnel.

In a letter to Mattis, the Senators wrote, “This announcement contradicts existing Defense Department policies, undermines our military readiness, and puts our transgender service members as well as their commanders in an impossible situation.”

“Forcing these brave Americans out of our military would be cruel and discriminatory,” the Senators wrote.

The letter also states, in part:

We further write to request that, at a minimum, you do not separate any service member due to the person’s gender identity until you have completed the assessment that you announced on June 30, have reported back to Congress about any challenges that you foresee in the accession and retention of transgender troops, and determined the Department is unable to mitigate these challenges.
…
Forcing these brave Americans out of our military would be cruel and discriminatory,” the letter reads. “It would harm our readiness by denying the military of these service members’ capabilities and requiring the military to replace them at a time when the recruiting pool for services continues to shrink. It will harm morale in the military as service members see their brothers and sisters in arms — some of whom are currently forward deployed — thrown out simply because of their identity.
…
Any American who wants to serve and meets the standards should be allowed to serve our country. Transgender service members are serving with honor and distinction today and we ask that you, as our Secretary of Defense, assure them that their service will not be ended simply because of who they are.