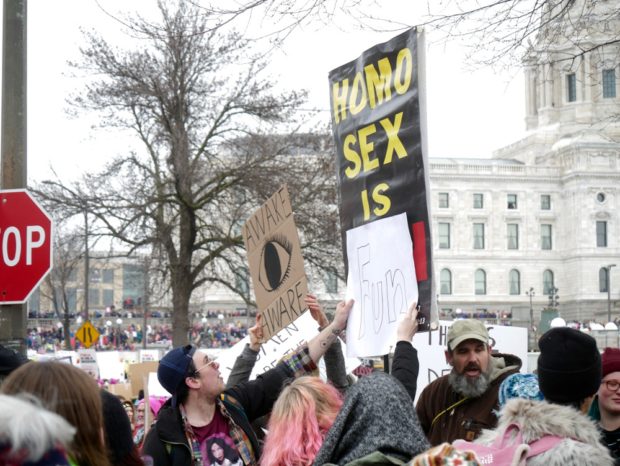 One hundred thousand people marched in St. Paul on Saturday but only one person was arrested: an anti-LGBTQ protester. Paul Pearson was arrested on Saturday after an altercation at the Women’s March on Washington – Minnesota event at the Capitol lawn. According to video recorded at the event and several witnesses, Pearson sprayed a chemical irritant into the crowd hitting perhaps a dozen people.

Pearson was formerly part of the Old Paths Baptist Church in Northfield, a vigorously anti-LGBTQ conservative baptist church. An attorney for the church says he was removed or “discipled out some time ago” and a commenter claiming to be a part of the church says it was due to “allegedly criminal and belligerent behavior.

The Column followed the church’s activities early last year in an article titled, “Meet the street preachers harassing ‘sodomites’ in downtown Minneapolis.” Pearson and a group of about a half-dozen men have been protesting LGBTQ events throughout 2016 including Golden Valley Pride the day following a shooting in Orlando, Fla., which took the lives of 49 LGBTQ people and injured 53 others many of whom were people of color.

On Saturday, Pearson was standing in the crowd at the event holding a sign that read, “Homo Sex is Sin.” His presence caused a dozen or so people to gather, confront, and dissuade Pearson, including holding up a sign that changed “sin” to “fun.”

In video by Jake Tonsager given to WCCO, Pearson abruptly turns around that sprays everyone within 5 feet of his sign.

In a separate video taken by Awen Briem who was standing near the altercation, Pearson appears to have accidentally sprayed himself and people rush to attend to him as well as his victims.

So this guy verbally harassed and condemned us and we put our bodies in harms way to avoid violence. He then managed to spray himself in the face and the people he attacked helped him.
Take all the time you need to think about that. Our community rises above again and again. Despite trauma. Despite violence. Despite hatred and condemnations and bigotry.

According to the the Ramsey County Sheriff’s Office, he was arrested at 12:15pm on suspicion of felony assault.