Tourism may be a big industry in the Brainerd Lakes area, but Rep. Josh Heintzeman, R-Nisswa, refused to carry the Explore Minnesota tourism bill when asked to do so by Republican House leadership, the conservative state representative told supporters at a July 14 picnic fundraiser in Baxter in remarks that he believed were not being recorded.

He doesn’t tell his supporters that he later signed on as a co-author of the Fabian bill.

In audio posted on Youtube, Heintzeman tells his supporters that he wasn’t certain why his heart was against the bill, traditionally carried by a Crow Wing County representative. When he later learned about an Explore Minnesota tourism ad aimed at attracting same-sex couples to Minnesota he knew God had protected him and given . Heintzeman prefaced his remarks about tourism and same sex marriage with

. . . there was a tweet that went out earlier this afternoon encouraging folks maybe to come to our event from the other side of the aisle, and there might be some conversation around that cause we’d the event to stay private even though it’s an open area, so we’re not recording anything tonight. So I can just talk in a heart-to-heart with people that have supported me.

Heintzeman: . . . And there have been times throughout the course of the last two years where issues come up, and constituents have contacted us, talked to Keri and I, and really blessed us by helping us kind of see perspective on an issue, and a good example is the Explore Minnesota tourism bill [2015]. I was asked to carry an $11 Million increase to their budget. And I couldn’t explain to my leadership, I didn’t have any good reason why not. The representative from the lakes area, Crow Wing County, always carries that bill.

And the more we [Heintzeman and his wife Keri] talked about it, the more we sought the Lord on it, I just had a no-go. My heart was not allowing me to move forward and support that bill. And much to the chagrin of my leadership, I had to continue to stand and not work on that, so they gave it to another representative, Rep. [Dan] Fabian [R-Roseau] took it.

Curiously enough, Heintzeman was a co-sponsor of the Fabian bill, having added his name to the legislation nearly month after it was introduced: 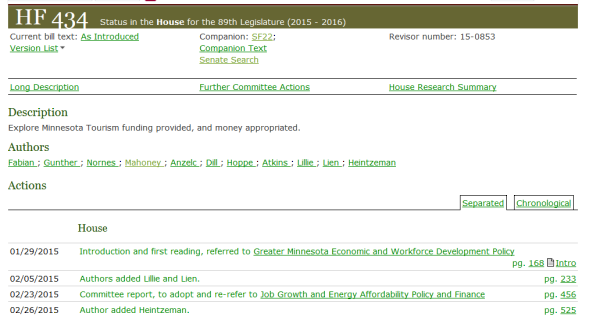 Apparently, being a co-sponsor doesn’t count. The freshman legislator continues:

About three, four weeks after session ended — I want to preface this comment by pointing out that obviously a lot of you guys know that marriage was an important issue in Crow Wing County and was a big part of the discussion two years ago–well three, four weeks after session ended, Explore Minnesota Tourism released an ad-buy, in the details of the ad, promoting Minnesota as a destination for couples that were of the same sex wanting to get married.

Heintzeman:That ad didn’t run in Minnesota. It ran in states all around Minnesota with different law in regard to same-sex marriage.

Heintzeman’s description of the ad isn’t particularly accurate, since it doesn’t promote Minnesota “as a destination for couples that were of the same sex wanting to get married,” but rather features husbands Ben Meents and Chet Ritchie as they enjoy the splendors of the North Star state, as The Column’s Andy Birkey wrote in Minnesota’s tourism council ad features gay couple.

Given that the Supreme Court ruled in favor of marriage equality in late June 2015, we’re pleased that the ad buyers had it in their hearts to buy time in markets where same-sex marriage was legal, in addition to places where it was not (as Heintzeman believes), since that would have been a waste of money. God–and media markets–work in mysterious ways.

Heintzeman: So, I just want to leave you with that, I guess pointing out that when I first talked to everybody here two years ago, I referenced 1 Kings 3:9. There’s two accounts, Solomon on his bed asking one account, he asked for wisdom. And I like the accounting kings, because he talks specifically for asking for an understanding heart that would know the difference between good and evil, that he would judge God’s people rightly. And so many times on the surface over the last few years, there’s things that seemed right to Man, that seemed right to me, but thankfully the Lord protected us from those things, and we’re very blessed to be able to keep out of those kind of situations like that Explore Minnesota tourism bill.

Perhaps Heintzeman can explain to his anti-marriage equality base why co-authoring a bill means that he wasn’t involved in it. He also voted for HF843, which included funding for Explore Minnesota, but which was authored by Rep. Pat Garofalo, R-Farmington. (Garofalo voted for marriage equality, so there’s no pious hypocrisy in this on his part).

Other than all these details about the bill and the ad campaign, Heintzeman totally has an understanding heart and no way misleads his supporters.