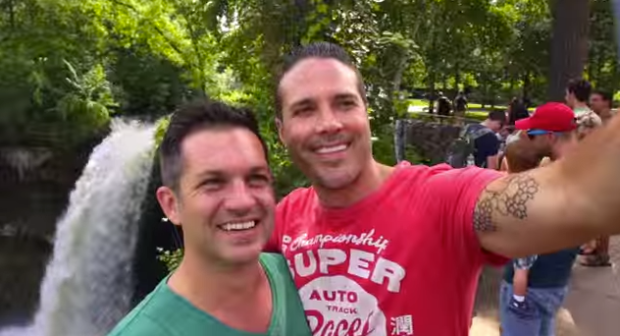 The official tourism council of the State of Minnesota has released an ad about Minnesota featuring a gay couple tasting microbrews, zip-lining, and taking a Segway tour through Minneapolis, among many other recreational activities. The video is the latest part of Explore Minnesota’s #OnlyinMN campaign series of videos. Minnesota couple Ben Meents and Chet Ritchie are the pair featured in the video.

In a commentary for the Advocate, their daughter Emma wrote about her dads, the ad, and a conversation she had with Gov. Mark Dayton about the state’s official tourism council using a gay couple to show the state’s “awesomeness.”

Since I’m only 13, I’m not really like a national expert in “state awesomeness” or anything. So I thought I had better talk to someone a lot smarter than me on this topic. I decided to go to the top “state awesomeness” expert directly, and I contacted Minnesota’s governor, Mark Dayton.
And to my surprise, he actually agreed to meet with me. If you ask me, any state with a governor who would agree to spend time with a teenager to talk about LGBT issues has to be pretty amazing.
When we met, I asked Gov. Dayton lots of questions about what makes Minnesota a great state to visit and to live in, but what I really wanted to understand was what kind of message he thought Minnesota was sending to other states by using a gay couple in such a prominent way to promote tourism.
“Well, Minnesota is just a reflection of the world,” Gov. Dayton said, as if it’s the most obvious thing in the world. “I think it is really important for us to show that regular families — whether gay families or heterosexual families — represent Minnesota. We want to send a clear message to everyone, which we have done over and over again, that Minnesota is one of the friendliest states to the LGBT community and as a state we will protect everybody.”

It’s also not the first time Emma has written about her dads. In a commentary for Lavender Magazine last year, she wrote about her parents’ wedding.

Cities such as Las Vegas and Tampa Bay have marketed to LGBT travelers, but Minnesota’s ad may be the first time a state tourism council has featured a gay couple in tourism marketing.