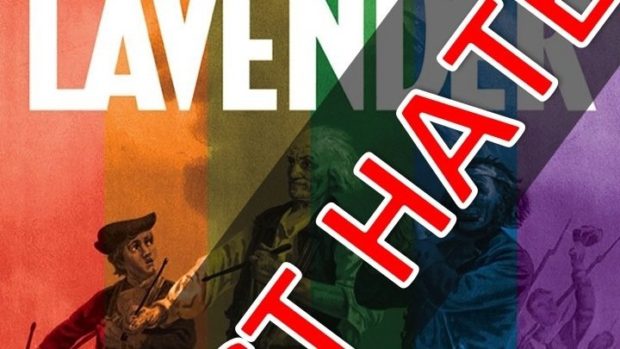 A petition has been launched demanding an apology from Lavender Magazine, a commercial publication targeting the LGBTQ community, after its Pride edition featured an editorial on the hate-motivated shooting in at an Orlando gay bar that killed 49 mostly Latinx LGBTQ people, and left more than 50 others wounded.

The editorial and its accompanying cover imagery have been accused of nationalism, white-washing, and Islamophobia. The cover depicts Archibald Willard’s famous Spirit of ‘76 painting overlain with the LGBTQ Pride flag. Inside, an editorial titled Spirit of ’76 (A Coward Strikes Again) states in part, “Much has been said as to why this was “allowed to occur.” Contrary to those running for president who wish to take political advantage in this time of tragedy, this is not an issue of access to guns, nor it is an issue about immigration. This cowardly attack is solely an issue of religion.”

The writer then takes aim at one religion in particular: Islam.

For example, as a Muslim cab driver holding a public license, you do not have the right to refuse to take a person home from the airport because they are carrying a bottle of alcohol. That is the imposition of your religious views on someone else’s life. You do not have that right in this country. You have the right to worship in the mosque of your choice. That is what the First Amendment of the U.S. Constitution is all about: respect for others.

That the editorial neglected to mention that LGBTQ people of color were the targets of violence at the Orlando Pulse, mostly Latinx and of those mostly Puerto Rican, has been a chief complaint. The singling out of Islam as a source for the violence is another. According to the petition:

The latest issue of Lavender Magazine, “Minnesota’s GLBT magazine,” is an utter disgrace. We demand an apology and the immediate removal of the editorial board. The editorial, Spirit of ’76 p.10, on the tragedy in Orlando is a racist and hateful commentary which claims that “This cowardly attack is solely an an issue of religion.” Lavender’s attempt to blame our muslim brothers and sisters and pit communities of color and LGBTQA community against one another will not be tolerated. Lavender Magazine must be held accountable.

As of Friday morning, the petition had garnered more than 300 signatures.

On the petition, many members of the community had sharp criticism for Lavender:

Reina Olivas Ramirez of Minneapolis wrote: “Acts of ignorance of few shouldn’t condemn or classify a religious entity. Let’s not continue on a path of ignorance and bigotry. Break the cycle and stand against actions that perpetuate hate and prejudice! Respect for other’s beliefs is pivotal!”

Natasha Villanueva of Minneapolis wrote: “We need to stand together during and following tragedies to find solutions. Hate, toxic masculinity, and homophobia affect many different populations, not solely Muslim people.”

The “Spirit of 76” –both as a cover and inside commentary is not merely, offensive or disgraceful; it is Islamophobic and violently inaccurate. For Lavender to participate in the most reactionary type of narrative about Orlando (one which intentionally reduces the entire event to a question of ‘religion’), is not only an injustice to both the lives that were taken in the Tragedy, but makes a violent contribution to already toxic level of Islamophobia, and further pits Minnesota’s Muslim and LGBTQA against one another.

Remy Corso of Minneapolis wrote: “Currently Lavender doesn’t represent our diverse LGBTQ communities. I’m in solidarity with LGBTQ people of color who are not only “gay” (which leaves many of us out, too) but ALSO Muslim, Latinx, black, and brown – and rightfully demand an apology along with change.”

That apology had not come as of Friday morning. The Column asked Lavender for comment about the criticism, and was directed to a response to the criticism published on Thursday afternoon which read, in part:

Omar Mateen was torn internally between inculcated doctrine and natural sexual feelings. This inner conflict was entangled in deep religious roots, whether his or others. This case is far from the first to suggest a causal relationship between religious self-hatred and gay homicide. Minneapolis-based Center for Homicide Research is a volunteer-driven nonprofit that has seen cases of self-loathing individuals struggling with incompatible Christian teachings, and killing their own.
While his background was Muslim, Islam is not the only religious background that has taught intolerance regarding this community. And, we acknowledge that many changes are happening within religions to combat these intolerances today in 2016. But, consider that a number of the victims of the shooting were from Puerto Rico, which is largely still intolerant of same-sex marriage, with the Pew Research Center citing 55 percent of Puerto Rico to oppose same-sex marriage, being 72 percent of Protestants and 45 percent of Catholics. Many of the 49 victims had experienced their own homeland’s religious intolerance before one man’s conflicted ideas terminated their existence.

For many commenters, the attempt at explanation raised further criticism.

Its also, yet again, indicative of how Orlando is serving an unrepentant nationalist fervor. From the picture in the article to the reference to the “Constitution,” and political liberties, attention to Islam and their description of cab drivers, all of that functions and serves as dogwhistles for the deep fear of “the terrorist” other, the image we are fed constantly whenever we are made aware that the perpetrator of violence is not white. A simple equation could be drawn: The U.S. is good for white gays, everywhere else is bad, because religion. As if that actually underscores the violence people experience in their lives. Never mind how complicit the U.S. is in generating acts of violence, shame, and fear by destroying the places the very folks at the center of Orlando, Omar included, are from (and yes I am also referring to those who were born in the contiguous U.S. as well).
This “response” is a patronizing, pretentious, and blatant refusal to take any accountability for reinforcing an all too familiar narrative. In their response, I’m being lectured to about how to properly “understand” this issue, while they refuse to acknowledge a broader historical context. You could have thrown me in some gay Tea Party website, and I probably would have found something similar.

Here is what you need to know:
The same day of the Orlando shootings, cities across the country held vigils, and Minneapolis was no exception. I’m not sure if you were there or not (I suspect you were not), but one of the speakers who came to mourn with us, and show his respect — and the respect of the community he represents — was the Executive Director of the Council on American-Islamic Relations (who, incidentally, was just awarded the Immigrant of Distinction Award for 2016 for his community-building work). This was the first time that group represented itself in front of such a large number LGBT community members. Further, in response to Orlando, a group of local LGBT Muslims and their allies joined forces and walked for the very first time in the Pride Parade. They walked just behind J-Pride (the Jewish LGBT contingent) as a symbol of their peace. This is the very first time in the history of the Twin Cities Pride Parade that the Parade included a Muslim contingent.
The point is this: the local Muslim community is making great strides in bridging the gap between it and the LGBT community. Many of us in the LGBT community are trying to do the same. Lavender, as a publication that speaks to and on behalf of the LGBT community, has a responsibility to do this as well. Instead, your editorial and this non-response are building the very walls the rest of us are trying to take down.
At the very best, your editorial and this response are irresponsible, judgmental, and over simplistic.
At the very worst, they are hateful.