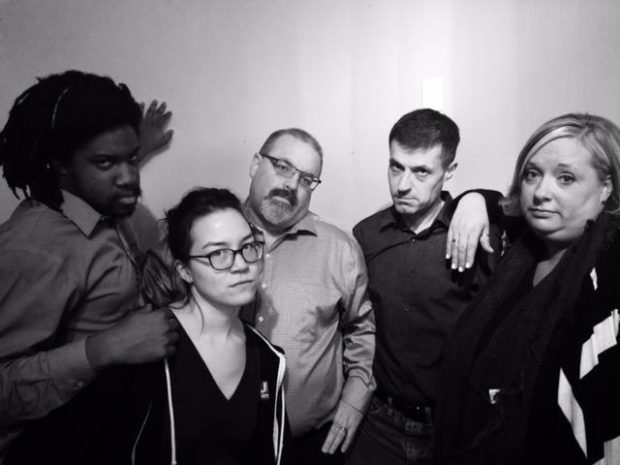 Since their inception, Lavender Panic has performed as part of several different events, most recently “Improv-A-Go-Go,” Huge Theater’s Sunday night Pay What You Can offering primarily consisting of emerging talent with seasoned performers trying out new groups or acts. I am ecstatic to highlight them during Pride month. The work they are doing breaking ground in the improv scene is so important, but so is laughter in and of itself.

Lavender Panic, an all LGBTQ+ improv troupe that, in their own words, promotes queer visibility by being queer and visible, started after troupe leader Sarah McPeck saw how great she and members Denzel Belin, and Jay Simmons worked together during Gadfly Theatre’s first ever “Drunk Queer History.” The three seasoned, passionate improv artists quickly added James Satter and Ben Wagner to fill themselves out. While the improv scene in the Twin Cities is full of LGBTQ+ talent and there have been a couple of exceptional duos, no larger group like Lavender Panic has existed — hence the idea to promote queer visibility by being queer and visible.

Understandably this particular Pride month has a dark cloud hanging over it. We as a community are heartbroken and often fearful of moving forward with our lives. It is these times we rely on the comedians among us the most, and Lavender Panic excels at what they do. Their run at Improv-A-Go-Go had me in stitches, each performer and scene more talented than the last. Below is Lavender Panic in their own words.

Lavender Panic is:
Denzel Belin He/Him/His “I started improv five years ago my freshman year at St. Olaf College and continued my improv education post-college at HUGE, Brave New Workshop and ComedySportz. I have performed with the Unscripted Theater Experience, Throwback Night at HUGE Theater, The Neutrino Project at HUGE, and won the 2016 Troika Competition with the group The Sultans of Silly.”

Jay Simmons He/Him/His Jay Simmons is a young improv artist in the Minneapolis. New to the scene, Lavendar Panic is his first Improv troupe.

Sarah McPeck She/her/hers Mcpeck is a Minneapolis based comedic storyteller and improvisational artist. She performs stand up comedy and teaches improv at The Brave New Workshop in Minneapolis, MN.

James Satter He/Him/His “I began studying and performing improv in 2014. Last year I taught a drop-in class at Huge Theater on making character choices based on the Seven Deadly Sins.”

I know this story, but tell us a little bit about how you all came together.
Sarah McPeck: Gadfly Theater was hosting a fundraiser and the theme was Queer Drunk History. They reached out to myself, Jay and Denzel, as they knew we all had improv experience. Without knowing each other at all and with one practice, we had a smashing night and we looked at each other and said, “This should become a think we do, let’s start a group!” Immanuel from Gadfly was standing there and said “Please call yourselves, Lavender Panic.” We all said, “Yes!” and never looked back.

What makes Lavender Panic stand out from other improv groups?
Denzel Belin: What I love about Lavender Panic is that it is a fairly diverse group in more ways than one. Of course, there is the obvious that unites us all, but we have a range of ages, races, and improv experiences that make us a really unique group, especially in the Twin Cities. The variety that we have makes for interesting dynamics that are ever-evolving and the more we play, the more we learn about each other as improvisers and as people.

Ben Wagner: The fact that the troupe is composed of members of the queer community, a historically marginalized group is the main reason we stand out from other troupes. Even early on, before we had spent much time playing together, we had so much common ground to work from having lived in the same community. Certain attitudes and cultural tropes show up in our work and make it easier to work from our “group mind.”

What’s been your favorite event so far with this group?
SATTER: I enjoyed Lavender Panic’s recent Improv A Go Go run at Huge Theater, especially the scene when I got to be a do.

Jay Simmons: My favorite event has to have been Drunk Queer History. It was the first show we had done before we were actually, “Lavender Panic”. It was just Denzel, Sarah and I and we did this amazing bit on the Gay Agenda — but it was done as a musical. That moment was when I realized we had some great connection as a group.

This seems to be a place you all come back too no matter what else you do. What is the draw of improv for you?
Jay Simmons: Improv gives me the chance to let my mind go & think without censorship. I also am given the chance to direct my own show and make my own character, which puts together my acting side as well as my love for creating a story. The thing about Lavender Panic being a queer group, it allows me to show off the Queer spectrum and the different kind of people you can and will find in the community.

Sarah McPeck: I love the excitement of performing within the construct of improv because it is exciting and safe place to feel terrified. You never know what will happen next. I can stretch as an actor, I can stretch as a human, its a pretty great place to create in.

What do you see in Lavender Panic’s future?
Denzel Belin: What I would love to see for Lavender Panic is the opportunity to play in a variety of locations and events that are not directly an “improv audience”. We started at a fundraiser event, and I can definitely see us performing at more events like that. We all have our own networks and it will be wonderful to see what comes up once we tap into it. I am also personally interested in adding a member or two to facilitate more ideas and opinions being thrown into the mix.

Ben Wagner: I, of course, would love to see the group get more shows and draw in a larger crowd from the queer community. It would be wonderful to perform in queer spaces that might not currently showcase improv. I would like it if we could expose more people in the queer community to improv and perhaps turn others on to a great creative outlet.

Comedy and improv have a lot of really great performers but are still considered hard fields for marginalized people to be safe and succeed in. With that in mind, what do you hope changes or gives way in the improv scene through the visibility yourself and other groups of marginalized people are promoting so successfully?
DB: We start every show with a saying. “We promote queer visibility by being visible queers”. In my personal philosophy with live performance, representation and who we see on stage matters far more than a lot of people realize. What we have the possibility of doing is breaking the mold that surrounds comedy – a game made for late 20s/early 30s cis straight white men wearing flannel shirts – and showing that anyone can and should have an opportunity in. If someone came up to us after a show, and told us that after seeing our show, they wanted to try improv or any kind of comedy, I would say that we have succeeded.

Sarah McPeck: I hope that through our performance that people can see themselves in our scene work. I hope people can see a community of people coming together and being so proud, so willing to say look at me, I am a queer person. What they derive from it is there own journey. I can only hope that we build community and safer spaces for people to feel accepted and welcomed in. I hope that through our scenes we can confront stereotypes and rhetoric. Through out our scenes I hope people see the love and joy we have living in our truth.

Jay Simmons: Listen. So it’s hard to find black performers in Improv. It’s hard to find trans performers in Improv. And the fact that I’m both and only 19, that’s unheard of, we just don’t exist in the Improv scene. That upsets me, because I know so many people like me that would slay the stage. But they don’t fit the cookie cut image. I want to show people that it’s possible. I want people to realize that actors like me are just as amazing, funny, confident and if anything have such a rich background and history that those cookie cut images of the ideal improv actors do not, that we can pull from. We can bring a whole new wild card to the table and we’re fresh to the scene. I truly believe one day you will see QPOC changing the Improv scene.

Ben Wagner: I just attended a three day improv retreat where a great discussion was had on how the improv community can better support marginalized groups. Even there some performers still didn’t get it. However, I feel like the improv community is starting to see positive change in how women, POC, queer and other marginalized groups are treated on stage. I would like to see this positive change accelerate, and I think our group shows that, while having a similar background can help our troupe play together easier, we aren’t funny just because “being queer is funny.” In a creative outlet where adults tell you stories, and let you be part of them playing make believe, I would like to think that eventually we will get to the point that it doesn’t matter what “group” a performer happens to be from, any performer can embody any character, from astronaut to zoo animal.

What’s next for the group?
James Satter: Lavender Panic is scheduled to perform at the national Gaylaxicon convention, which will be held in the Twin Cities this year on on October 8, 2016.

Sarah McPeck: We are hoping to get a weekly slot at HUGE theater in Minneapolis. We are also looking forward to booking gigs at schools and or youth organizations and trying to do more outreach. We are saying yes to whatever we can fit into our busy schedules!

Where can we find out more about Lavender Panic?
Sarah McPeck: Our facebook Page, facebook.com/Lavenderpanic