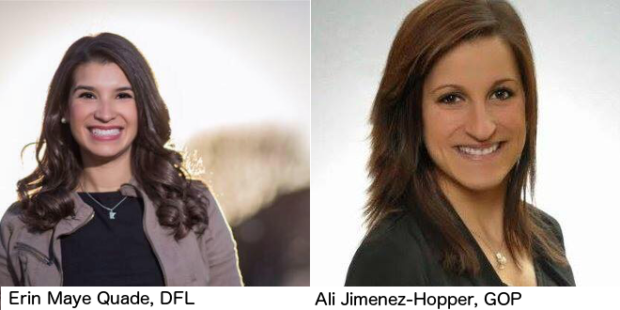 A House candidate in Apple Valley used race and sexual orientation to criticize her opponent at a recent GOP convention.

Ali Jimenez-Hopper earned the Republican endorsement in House District 57A which encompasses parts of the southern Twin Cities suburbs of Apple Valley and Lakeville. Jimenez-Hopper is running following the retirement of Rep. Tara Mack who was embroiled in a scandal 2015 after a police officer alleged that she and fellow Republican Rep. Tim Kelly were making out in a car parked at a campground near Eagan.

Jimenez-Hopper will face DFL endorsed candidate Erin Maye Quade. Quade is a longtime organizer having worked for the Obama presidential campaign, Sen. Amy Klobuchar’s campaign, Gov. Mark Dayton’s campaign, and in Rep. Keith Ellison’s office. It’s through organizing that she met her wife, according to her campaign website. Like many candidates (including Jimenez-Hopper), Quade had shared pictures of her family on her website and social media. To Jimenez-Hopper, that seems to be an issue.

In a speech at the Republican endorsing convention in mid-May — which has since been posted to Youtube — Jimenez-Hopper took a shot at Quade’s family and ancestral background:

She brings up that she is half black and she uses that as a strength. She brings up that she is in support of LGBT and that lifestyle and puts out pictures on twitter of her and her wife. She is for more socialist programs which is against what our party believes in. Now while I don’t have a speech formally prepared, I know from the bottom of my heart that I am not for socialist program. I believe in small businesses and I believe that hard work will prevail. I believe in low taxes. I believe in the traditional marriage in the sense that it’s between a husband and wife and that family is important. We need to have these values so we can go forth and think about your community.

In that speech, Jiminez-Hopper made a great deal about her own Christian faith:

Jimenez-Hopper’s view towards same-sex couples appear to run congruent with her church’s views. She attends Hosana! Church in Lakeville which severed ties with the Evangelical Lutheran Church in America after the denomination voted to allow churches to ordain LGB clergy if they wished.