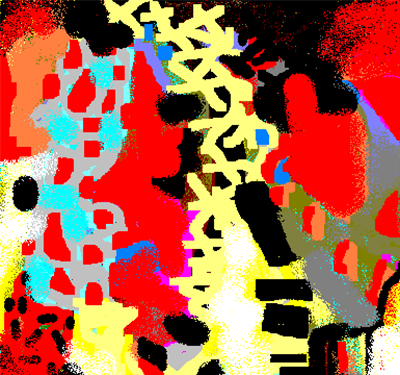 Grigsby’s life has touched so many, and the LGBTQ+ community, as well as the community that surrounds those living with HIV, felt the loss deeply when he passed from complications from the illness in 2014. The Art of Change he created is going up this Sunday at Le Meridien Chambers Hotel Burnet Gallery from 11:00 A.M. To 4:00 P.M. The show honors his life and the fearless art he left behind. The Art of Change is a multimedia event that explores the history of the Minnesota AIDS Project and it’s connection to the community of those affected by HIV, but ultimately elevates the voices of those lost to HIV and AIDS by focusing on Grigsby, a relatively unknown yet evocative artist who learned to use his physical and financial limitations to his benefit to create groundbreaking works of art about lives, communities, and families affected by HIV and AIDS.

Minnesota AIDS Project chose this event this year to celebrate their own growth and change. In their words: “2016 marks a year of change and renewal for the Minnesota AIDS Project. As we move forward with a new location, the first-ever hiatus for the Minnesota AIDS Walk, and the groundbreaking Art of Change exhibit, we examine the life of Nigel Grigsby, an unknown, HIV-positive artist who was tireless in his commitment to his creative practice, and who adapted to his limitations and used them to create an amazing body of work. Nigel’s story is emblematic of the new struggles we face in the fight against HIV. His ability to adapt to new circumstances and move forward are incredibly inspiring. We hope to meet the coming challenges with the same creativity and imagination that Nigel exhibited throughout his life.”

A cornerstone of Art of Change is the premier of a documentary about Nigel Grigsby’s life and artwork also called The Art of Change. The film further illustrates the innovation that marks Grigsby’s life. Those close to him, including his partner and case manager, discuss how he created the bulk of his work using only a computer mouse and basic paint program. This was long before graphic design as we know it would blow up as a field and a couple of decades before a well-photoshopped image could bring Instagram fame. Grigsby managed to take a basic IBM computer, his little computer knowledge, and create works of art that blow even a lot of modern turns at digital art out of the water. The documentary, simple in format and more than satisfying in content, is an appropriate and celebrated addition to this exhibit.

Grigsby’s work, though created primarily through the same digital medium, is varied in it’s approach. There are pieces depicting what almost seems mundane and gives us a “day in the life” perspective, such as one of a man sitting in a coffee shop, seemingly just zoning out. Yet these works take a macabre turn when considered with the full body of work. There are several prints of heartbreaking self-portraits, where Grigsby portrayed himself as thoughtful but sad. There are images of people dying, cut open, or bleeding. Grigsby takes a few ideas and adds layers of meaning to them. A dancer in a tutu looks lost even though she is in her element. Shadowy figures don’t reveal if they’re celebrating with dance or mourning with big gestures. Even the image of the man sitting in the coffee shop shows mere suggestions of other people– have these people already faded from life? From Grigsby’s life? Art is inherently subjective as it is. Where one may see a landscape as barren, another may see it as a celebration of nature. Grigsby had an uncanny handle on art’s subjectivity and turns it further on its head. He had an almost spooky knowledge of how this work would look after his passing — what he may have drawn as a simple water pitcher on a table would take on new depths and a feeling of abandonment after he was gone.

The Art of Change description states “For over 33 years, the Minnesota AIDS Project has been fighting to stop HIV in Minnesota. In that time, we’ve witnessed incredible technological improvements and cultural shifts which have had a profound impact on the communities we serve. While most of these changes have had a net positive effect, they’re also responsible for a growing public perception that HIV is no longer an imminent threat. The stakes haven’t changed. The outcome is still a matter of life or death. As people live longer with HIV the cost of managing their care grows exponentially, legal issues arise, and the need for services and support are ever greater. The Art of Change explores these issues and challenges.” Yet there are images undoubtedly of hope in this body of work. Abstract pieces full of life and color, a person holding a candle burning bright — these take on new meaning after Grigsby’s passing as well.

We have lost so many LGBTQQIAP+ community members to HIV and AIDS, but there are so many forces for good in this community and there HAS been so much improvement over time. It’s not enough to stop fighting, but it does confirm that there is always reason to hope even as we mourn. There is always reason to celebrate even as the hard work of creating change takes it’s toll on us. The Art of Change puts us through the emotional wringer, but ultimately leaves Grigsby’s loved ones and the Minnesota AIDS Project itself as the figures holding the candle. The Art of Change and Grigsby’s voice drives home one of my personal theses: where there is shadow there is light, and where there is art, there can be change.

The Art of Change takes place Sunday, May 15th at Le Meridien Chambers Hotel Burnet Gallery from 11:00 A.M. To 4:00 P.M. This event is free and open to the public, and Grigsby’s work will be available for purchase at this event. The Art of Change is sponsored by Delta, Redpath and Company, Janssen Pharmaceutical Companies, Gray Plant Mooty, Harris Companies, and Aveda. Find out more at www.artofchange.mn or www.mnaidsproject.org.