Parents of a transgender child have filed a discrimination complaint against Nova Classical Academy, a St. Paul charter school.

The complaint, filed by David and Hannah Edwards with the City of Saint Paul Department of Human Rights, alleges that the school “(a) failed to protect their child and other gender non-conforming and transgender students at Nova from persistent gender-based bullying and hostility, and (b) denied their child the ability to undergo a gender transition at Nova in a safe and timely way, as she had in all other areas of her life,” according to a statement from Gender Justice.

The Edwards’ daughter, who is transgender, enrolled in Nova in the fall of 2015. After encountering some hostile comments for being gender nonconforming, staff prepared gender-inclusive training but were blocked by school leadership, according to the complaint.

Over the next several months, a coordinated campaign was launched by conservative Christian parents with the aid of the Minnesota Child Protection League, the Minnesota Family Council, and Paul Ridgeway, the host of religious radio station AM 980 KKMS. The campaign sought to prevent the school from enacting any inclusive policies — a campaign that appears to have been largely successful.

The Minnesota Family Council held an anti-transgender seminar in the school gymnasium (which hundreds of transgender community members and allies silently protested). The conservative groups even enlisted the help of the American College of Pediatricians, a national religious right group that has been described by the Southern Poverty Law Center as a hate group.

According to the complaint, dated Mar. 24, the Edwards were forced to withdraw their child from the school on Feb. 29 after the school declined to provide a safe learning environment:

In the face of an increasingly frightening environment, which included a series of public committee meetings and school meetings filled with discriminatory comments and threats and misstatements of the law, the school leadership continued to appease factions of the community who denied the school’s obligation to follow the law. When begged to clarify their communications (e.g., regarding the school’s policy on uniforms) and to take a clear position on the rights of gender-nonconforming and transgender students, the leadership refused outright or introduced delay after delay, while the bullying and hostility continued unabated. The leadership also chose actions — such as expressly inviting or even encouraging families to “opt out” of any education about gender and gender equality law — which indicated that the school was at best ambivalent about the rights of gender-nonconforming and transgender students. By it’s actions, the leadership also forced our family and our minor child to be publicly outed in order to try to participate in decisions that would affect her safety.

Here’s a copy of the complaint: 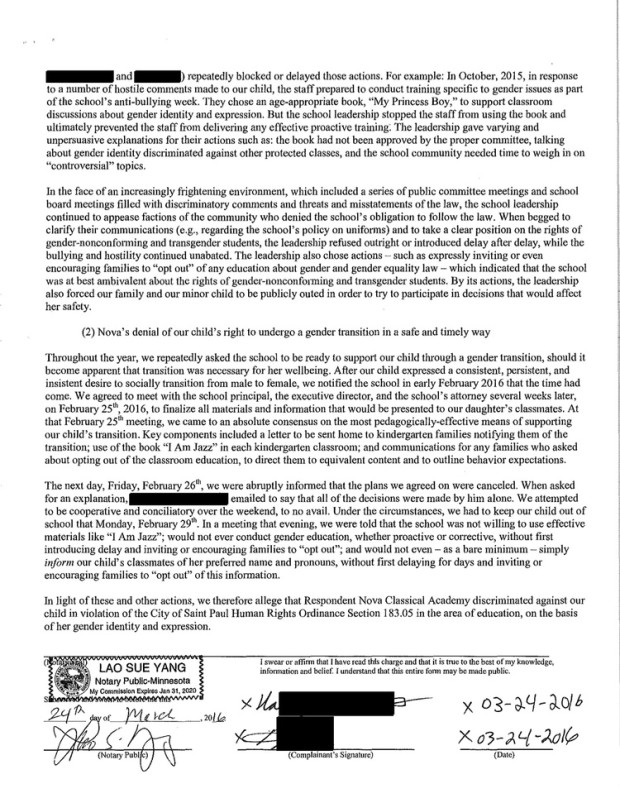