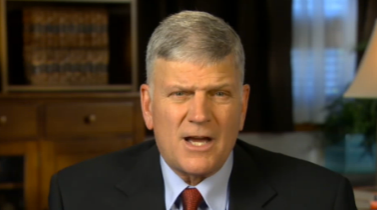 Franklin Graham, son of famed televangelist Billy Graham, is bringing his politically-charged, anti-LGBTQ prayer tour to St. Paul in June. Graham has been touring the country on his Decision America Tour 2016 with a goal to make America Christian again.

“God hears the prayers of his people, so I’m calling on people of faith in every state to pray fervently for America and our leaders,” Graham wrote on Facebook announcing the tour. “I want to challenge Christians across our land to boldly live out and promote biblical principles at home, in public and at the ballot box. The only hope for this country is if the people of God are willing to take a stand for truth and righteousness.”

The tour will include the capitals of all 50 states, including St. Paul on June 16. The tour has brought numerous protests by atheists, members of the LGBTQ community, and progressive Christians.

In Honolulu, Hawaii, protesters showed up with signs that read, “All are Abraham’s children,” and “The Aloha State Does Not Hate.”

In Sacramento, Calif., members of the LGBTQ held up a large rainbow flag and sang “God Bless America” outside Graham’s rally.

In Carson City, Nevada, demonstrators showed up to call attention to Graham’s anti-LGBTQ rhetoric including Kathy Baldock who held a sign quoting Graham’s words. “This is what he says about gay youth and I am not OK with that,” she said according to the Nevada Appeal.

Atheists and members of the LGBTQ community showed up at Graham’s Tallahassee, Fla., event holding signs calling out Graham. One protester, Isiah Taylor, told WCTV, “The way he talks about homosexuals and you know other religions and all of those other kind of things are really questionable to me and I don’t think if god was here he would approve of that.”

Protesters not only countered Graham’s remarks about LGBTQ people but also his rhetoric about Muslims. In Concord, New Hampshire, one protester held a sign that read: “I am a Christian standing with Muslims.”

Graham has a long history of anti-LGBTQ remarks. On LGBTQ rights, he said, “The architect behind this offensive is none other than Satan himself.” He backs Russia’s anti-LGBTQ laws: “In my opinion, Putin is right on these issues. Obviously, he may be wrong about many things, but he has taken a stand to protect his nation’s children from the damaging effects of any gay and lesbian agenda.” He also accuses LGBTQ people of recruiting children. GLAAD has an exhaustive list of Graham’s anti-LGBTQ activity.

The Column also put together clips of Graham’s anti-LGBTQ rhetoric including moments from his tour over the last few weeks.