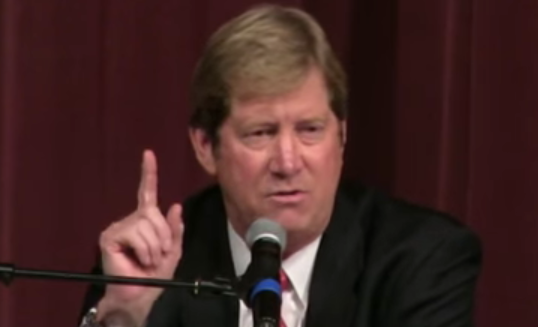 Lewis was asked by the moderator, “What would you change, if anything, in the educational system?”

Lewis lamented the perceived power of the government in public education and said, “But what happens when you allow this consolidation of power in St. Paul or Washington… even worse is you start to get these experimental schemes with our children. Now the latest is allowing transgendered students to use the restroom or locker facility of their choice. That is an abomination that no school district should adopt.”

Here’s the video clip via The Uptake:

The longtime Twin Cities conservative radio host has staked positions in opposition to LGBTQ equity before. A longtime friend of Michele Bachmann, he once ranted about “angry lesbians” going after her and gave the introduction at the launch of her failed campaign for President of the United States.

In his book, he made controversial statements about same-sex marriage and slavery, and in columns claimed that gays and lesbians could legally marry, so long as they married in heterosexual way.

He also apparently told radio listeners in 2013 that he opposes adoption by LGBTQ people, but those radio archives were pulled from the internet prior to his candidacy.