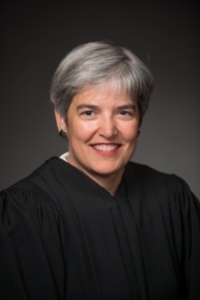 Gov. Mark Dayton announced on Friday that Judge Margaret H. Chutich would be Minnesota’s next Minnesota Supreme Court justice. Chutich is the first lesbian appointed to the state’s highest court and also the first LGBT person. She previously served as a judge on the Minnesota Court of Appeals.

Chutich and partner Penny Wheeler have been together for 20 years and married for 2 years. Justice Chutich has worked with the Minnesota Lavender Bar Association. She replaces Justice Wilhelmina Wright who was appointed by President Obama and confirmed by the U.S. Senate this week to the U.S. District Court of Minnesota. She became the first black woman to hold the position of federal judge in Minnesota. Chutich is a former associate dean of the Hubert H. Humphrey School of Public Affairs, and a judge on the Minnesota Court of Appeals.

“Judge Margaret Chutich has served the state of Minnesota honorably on the Court of Appeals, and as Deputy Attorney General,” Dayton said in a press release announcing the appointment. “Her ability to forge understanding amongst colleagues, and her fortitude to dissent when she deems it necessary, have served her well throughout her distinguished career.”

“I’m really looking forward to the chance to serve Minnesotans in this role,” Chutich said at a press conference Friday morning. On being the first LGBT-identified Supreme Court Justice, she said she hopes she can be a role model for aspiring LGBT attorneys: “I think it’s important they know there aren’t barriers to their dreams.”