Franken to Dept. of Ed: Publish names of schools that ask to discriminate 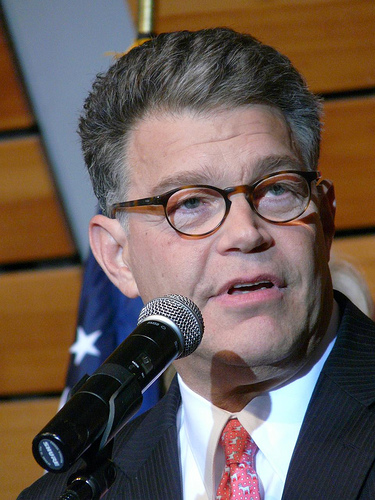 Sen. Al Franken is among eight Democratic Senators asking the Department of Education to make public the names of schools that ask for an exemption to Title IX in order to discriminate against LGBT students and staff.

In a letter to Education Secretary Arne Duncan, Sens. Ron Wyden, Tammy Baldwin, Barbara Boxer, Al Franken, Edward Markey, Jeff Merkley, Patty Murray, and Bernie Sanders praised the department for expanding Title IX to include gender identity. But, the letter also noted that dozens of schools were asking the department for waivers to Title IX so they could explicitly discriminate against LGBT students and staff while also taking in federal aid and grants. The letter states:

When Title IX was passed in 1972 to combat discrimination on the basis of sex, Congress included a provision allowing educational institutions that are controlled by a religious organization to receive a waiver under Title IX if compliance “would not be consistent with the religious tenets of such organization.” Exemption requests used to be rare, but according to a recent investigation by The Column, the Department of Education has granted waivers to 27 religious institutions in the last 18 months alone. Recently, there have been a number of conferences, webinars, trainings and discussions relating to how Christian colleges and universities can demonstrate their “sincerely held religious beliefs” and seek these waivers.’

The Column reported on Dec. 1 that dozens of Christian schools had requested the waivers to Title IX. The Senators asked that the names of the school that are granted such waivers be made public.

“At a very minimum, we believe that parents, students, and taxpayers have a right to know when institutions of higher education — as recipients of tax dollars — seek and receive exemptions under Title IX as well as the justification of those exemptions,” the letter states.

4 responses to “Franken to Dept. of Ed: Publish names of schools that ask to discriminate”