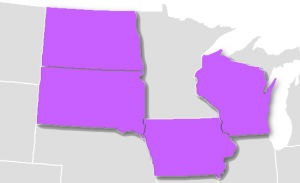 Wisconsin
The same law firm that represents rogue anti-LGBT Kentucky county clerk Kim Davis is assailing the Wisconsin town of Mount Horeb. The school had planned to read I am Jazz, a children’s book about transgender teen Jazz Jennings. Despite the school district sending a letter to parent that recognized “the beliefs and convictions of all families,” Liberty Counsel forced the district to cancel the reading.

WORT-FM notes that the school may still read the book in the future:

But the discussion was cancelled after a Christian legal advocacy group threatened the district with a federal lawsuit. The Liberty Council has been listed as a hate group by the Southern Poverty Law Center for advocating “anti-LGBT discrimination under the guise of religious liberty.”
In a statement from the Mount Horeb Area School District, Director of Student Services Theresa Daane says the school is providing additional time for parents to review the material.
The Liberty Counsel tells the district that all legal options will be explored if “I Am Jazz” is read to students and the group “will be tracking in which classes this book is read, and who reads it.”

Right-wing outlet WorldNetDaily noted that a parent contacted Liberty Counsel which got the legal threats rolling:

LC attorney Richard L. Mast Jr. told school board President Mary Seidl, “The district is not free to override parental rights and religious beliefs by subjecting impressionable children to confusion about something as important as gender and sexuality. The reading of ‘I am Jazz’ and following discussions about gender confusion and sexuality are the first step toward remaking the moral beliefs of district students, which the district may not do.”
The situation developed when the parent contacted Liberty Counsel about the notification from the school that Principal Rachel Johnson, school psychologist Nicole Tepe and counselor Emily McKee planned to promote the transgender book.
They gave parents only one business day’s notice and Liberty Counsel said it appeared the move by the school was “designed to catch parents off-guard, to prevent them from opting their children out of this reading.”
The lawyers asked for the event to be canceled, and said that happened, but also that the district appeared to be ready to continue pursuing the teaching.
The book, Liberty Counsel said, “is a false and misleading book” and will harm students by promoting controversial assumptions about gender, “which is neither the right nor business of government schools to do.”

The Wisconsin State Journal notes that the school district planned the reading of I am Jazz in support of a student who is transgender:

It was her first day introducing herself to classmates as the girl her mother says “she really is.”

In an effort to support the student’s transition from male to female, and to help her young classmates understand, the school had planned to read and discuss the book “I Am Jazz,” the true story of Jazz Jennings, a transgender girl who stars in a TLC reality show named after the book.

A bill to stop transgender students from using restrooms and other facilities of the opposite sex faced a contentious, hours-long hearing on Thursday.
But a spokesperson for the bill’s sponsor in the state Senate says it is designed to protect children, and that the bill accounts for the struggles of transgender teenagers. And a state activist told LifeSiteNews that “this bill is a reasonable response to a complex problem.”
“It’s clearly not an easy issue for public schools to deal with,” said Julaine Appling of Wisconsin Family Action, who e-mailed LifeSiteNews during the hearing. “But to not address it means violating the privacy rights of students. All students have a right to privacy. Allowing biologic boys to use the girls’ restroom and locker room and vice versa violates that right.”
On the other side of the issue, Human Rights Campaign legal director Sarah Warbelow said in a statement that Nass’s bill “belongs in the garbage” and that “AB 469 will place transgender and gender non-conforming students at risk for discrimination and harassment.”
In his testimony at the hearing, bill sponsor Steve Nass described Assembly Bill 469 as “a simple proposal with common sense provisions that establish a statewide standard to balance the interests of a diverse population of students and parents.”

Wisconsin State Journal columnist Chris Rickert thinks he has the solution to the debate:

One of the many questions in the brouhaha over where transgender students go to the bathroom is who suffers the greater psychological trauma — the transgender student forced to use a separate bathroom, or the non-transgender student forced to share a bathroom with a person whose anatomical sex is different from his/hers?
Maybe that’s a sign it’s better to steer clear of volatile adolescent emotion and the many pitfalls and dead ends of identity politics and focus instead on practicalities.
One such practicality is that only a tiny minority of students are transgender. And there’s an even tinier minority of non-transgender, or “cisgender,” students who risk exposure to genitals of the opposite sex when transgender students enter their bathroom “safe space.”
I’m no expert on girls’ bathrooms, but my understanding is that they generally don’t come with urinals, and the toilets are separated into private stalls just like in the boys’ bathroom. In other words, male- and female-identifying transgender students have no choice but to use private stalls.
Of course, cisgender males still run the risk of getting caught with their pants down by male-identifying, anatomically female transgender students. And there’s the particularly nettlesome possibility of trans students changing for gym class or taking showers in communal facilities that correspond to the sex they — but not their external anatomy — identify with.
For this, the solution is simple, and similar to one posed in a recent Chicago Tribune editorial: Provide private, single-occupancy shower, bathroom and changing stalls to all students.

Iowa
Marco Rubio is struggling with his message on marriage equality among Iowa’s anti-LGBT set. An Iowa pastor pressed him on the issue at an event last week, USA Today reports:

Iowa Christian conservatives say they’re looking for clarification on how far Marco Rubio is willing to go to fight the U.S. Supreme Court ruling that legalized gay marriage.
The Republican presidential contender seemed to contradict himself in statements he made in Iowa on Tuesday, GOP caucusgoers said.
And in one case, the discussion turned heated when an Iowa pastor asked a staffer to explain Rubio’s thinking after a speech Tuesday night.

“It is current law; it is not settled law,” answered Rubio, who was in Iowa for a five-day stretch. “No law is settled. Roe v. Wade is current law, but it doesn’t mean that we don’t continue to aspire to fix it. We think it’s wrong.”
He added: “Until we can get the Supreme Court to overturn (the abortion ruling), we do everything possible within the constraints placed upon us to confront it.”
Rubio said the Bible calls for people to adhere to both God’s rules and civil authority — but “God’s rules always win.”
“If we’re ordered to perform a same-sex marriage, as someone who is presiding over it, we are called to ignore that. We cannot abide by that because the government is compelling us to sin,” Rubio said.
That’s what Kim Davis did, Brody pointed out, referring to the Kentucky civil servant who was arrested in September for refusing to issue marriage licenses to same-sex couples.
“Right,” Rubio answered. In September, Rubio straddled the divide on the issue, saying a county clerk has a governmental duty to carry out the law, but there should be a way to protect religious freedom, too.

At an Iowa campaign event, Ted Cruz claimed that an act of violence committed at a Colorado Planned Parenthood for a “transgendered leftist activist,” Think Progress reports:

Republican presidential candidate Ted Cruz is the latest presidential candidate trying to downplay the role anti-abortion rhetoric may have played in motivating the Planned Parenthood shooting in Colorado Springs Friday afternoon. When a reporter asked him at an Iowa campaign stop Sunday evening about suspect Robert Lewis Dear saying he was motivated by “no more baby parts,” Cruz countered that he’s also been reported to be a “transgendered [sic] leftist activist.”
Cruz explained, “We know that he was a man registered to vote as a woman.” This discrepancy on Dear’s voter registration was first reported by The Gateway Pundit, a self-described “right-of-center news website,” under the claim that he “identifies as [a] woman.” Conservatives have since run with the claim that Dear is transgender.
There is actually no evidence to suggest that he is transgender, nor a “leftist,” nor any kind of activist. In fact, all of the available information suggests he was none of those things.

A recent Tuesday was not just another day at the Bowman County Courthouse, where the first marriage license for a same-sex couple was issued in the county’s history.
Court clerk and recorder Jan Werre said she didn’t view it as historic, despite the fact that the option only has been available since late June when the U.S. Supreme Court ruled it’s discriminatory to treat gay couples differently.
Werre said it was just another day at the office in her opinion.
“We’re doing our job,” said Werre, adding she would conduct the ceremony if asked. “It’s not a big deal. It’s how I would treat anyone else.”
According to a survey of counties, a total of 59 same-sex licenses have been issued in the state. Bowman now joins 17 counties that have issued a license to one or more gay couples. The remaining 36 counties have not yet been asked for one.