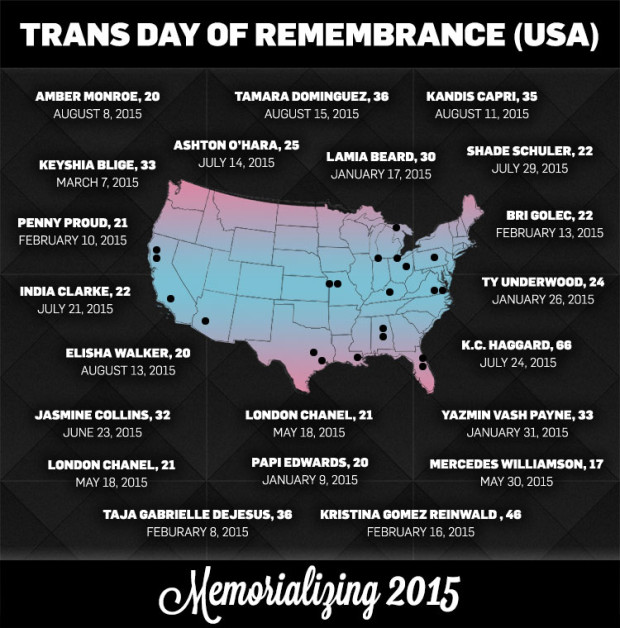 At least 81 transgender people were murdered worldwide in 2015, and those are only the names that have been reported. Twenty-one Americans have been killed in the epidemic of violence that has disproportionately targeted transgender women of color. The Trans People of Color Project and the Human Rights Campaign released a report this week on the violence against transgender people in the United States.

Kylar W. Broadus, Executive Director of the Trans People of Color Coalition, states: “The problems run deep — media, police and even family members sometimes misgender victims, making it even more difficult for advocates to collect reliable data. Discrimination and stigma mean that transgender people not only face violence from partners, but we are also more likely to experience harassment and violence from police officers, in homeless shelters or when seeking emergency care. Simply put, transgender people — particularly transgender women of color — are at increased risk for violence, and too often we have nowhere to go for help.”

Across Minnesota, events with not only remember those lost, but also celebrate the transgender community.

In Brainerd, a service will be held at 6pm at First Congregational United Church of Christ at 415 Juniper Street. Here’s the description for the event:

Congregations and communities across the world come together on November 20 to memorialize those who were killed each year due to anti-transgender hatred or prejudice. The event is held in November to honor Rita Hester, whose murder on November 28th, 1998 kicked off the “Remembering Our Dead” web project and a San Francisco candlelight vigil in 1999. Rita Hester’s murder — like most anti-transgender murder cases — has yet to be solved. All are welcome to this service of solidarity, support, and remembrance. Our time together will include music, prayer, candlelight, and reading the names of those who were taken from us.

Peace United Church of Christ in Rochester will host a remembrance service at 6pm. The event states, “We will honor and remember all our Transgender brothers and sisters who have died this year due hatred. Important to come together and build hope for the future!”

Living Table United Church of Christ at 3805 E 40th Street in Minneapolis will host a remembrance event at 7pm. That will be followed by Trans Jam, “celebrating the Trans, Gender Non-conforming and Gender Fabulous community!” Trans Jam will start with a meal share, trans identified performance and visual art, and a community dance. Trans Jam doors open at 7:30pm with performance at 8:30pm. Entry fee is $5-20 sliding scale and attendees can get a $1 off entry fee by bringing a non-perishable food item for the Queer Community Food Shelf. The event will be held at RARE Productions House at 3405 Chicago Avenue.

Many community members are also asking people to provide personal or material support on the Transgender Day of Remembrance for the #BlackLivesMatter protesters at the Minneapolis Police Department Fourth Precinct. A candlelight vigil will be held at 4:30pm to draw attention to the shooting death of Jamar Clark at the hands of Minneapolis police officers. Queer and trans people of color have been at the forefront of the #BlackLivesMatter movement in the Twin Cities, as OutFront Minnesota pointed out in a post about the Transgender Day of Remembrance:

These are the names of transgender Americans who lost their life due to violence in 2015:

KEYSHIA BLIGE, 33, A BLACK TRANSGENDER WOMAN FROM AURORA, ILL., WAS FATALLY SHOT IN MARCH WHILE DRIVING A CAR.

LONDON KIKI CHANEL, 21, A BLACK TRANSGENDER WOMAN FROM PHILADELPHIA, WAS FATALLY STABBED MAY 18.

MERCEDES WILLIAMSON, 17, A WHITE TRANSGENDER WOMAN, WAS FOUND DEAD JUNE 2 IN GEORGE COUNTY, ALA., AFTER HAVING BEEN FATALLY STABBED.

ASHTON O’HARA, 25, A BLACK TRANSGENDER AND GENDERFLUID PERSON FROM DETROIT, WAS STABBED TO DEATH AND RUN OVER BY A CAR JULY 14.

SHADE SCHULER, 22, A BLACK TRANSGENDER WOMAN FROM DALLAS, WAS FOUND DEAD FROM A GUNSHOT WOUND JULY 29.

KANDIS CAPRI, 35, A BLACK TRANSGENDER WOMAN FROM PHOENIX, WAS FATALLY SHOT AUGUST 11, IN FRONT OF AN APARTMENT COMPLEX.

TAMARA DOMINGUEZ, 36, A LATINA TRANSGENDER WOMAN FROM KANSAS CITY, MO., WAS KILLED WHEN SHE WAS HIT BY A CAR AND RUN OVER REPEATEDLY AUGUST 15.

KEISHA JENKINS, 22, A BLACK TRANSGENDER WOMAN FROM PHILADELPHIA, WAS FATALLY SHOT ON OCTOBER 6.