Home Artist Profiles Spotlight on the Arts: B.O.Y.F. (Before Others, Yourself Forever!) 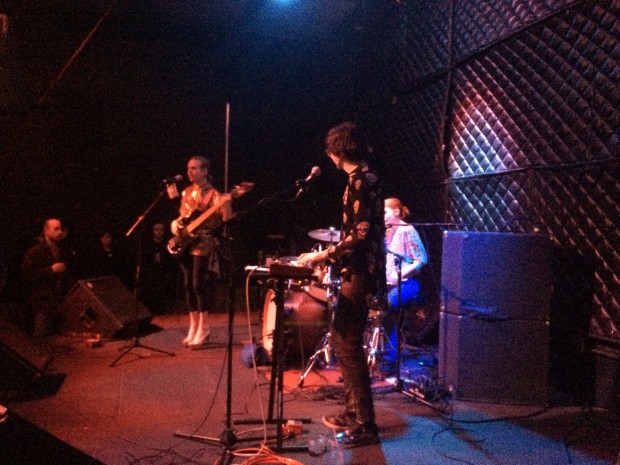 Synth-bass-drums (and occasional banjo) trio B.O.Y.F. (Before Others, Yourself Forever!) brought a healthy dose of quirk and queerness to an UnderCurrentMPLS-curated show at the Triple Rock Social Club on Wednesday, March 25th. Playing tunes from their debut album such as “This Is Not My Regular Voice (It Just Got Stuck That Way)” in addition to new songs such as “Intent,” B.O.Y.F. had the audience head-bopping and hollering throughout their set.

Formerly known as White Boyfriend, B.O.Y.F. is a transplant from New Haven, Connecticut, where the three musicians met as undergrads at Yale University. California kid Dan Hansen (bass) and North Dakota-native Nicky Leingang (synthesizer) met through their involvement in a production of Hamlet, in which Hansen played accordion and Leingang played the “Sassy Gay Player” (“It was kind of awesome,” says Leingang. “I got to do a scarf toss and hit Hamlet in the face with it.”) Leingang met Katharine Seggerman (drums), originally from Boston, through their mutual involvement in a secret society.

After graduation, Hansen started playing shows as a solo project. “I booked a gig telling the promoter that I had a band, but I didn’t have a band,” says Hansen. Thanks to an advertisement posted by Hansen in the house that Leingang lived in, Leingang and Seggerman began playing backup for Hansen. The three quickly found their own groove as they performed covers and experimented with playing songs that Seggerman had written. At that point, “I think you [Seggerman] said, like, that you didn’t feel like it was the same band if we were playing your songs,” recalls Hansen. “So we just made a different band.”

“Now,” adds Seggerman, “everything is such a hodgepodge that it fits—‘cause it doesn’t.”
While originally playing only songs that Hansen had written, all three are now songwriters for B.O.Y.F. “With that comes a lot of changes and diverging paths stylistically, lyrically, everything,” says Seggerman. “It’s been a lot more, like, listening to each other and trying to work with each other. . . working out our feelings.”

Leingang explains that whoever is singing the lead vocals on a song is who wrote that song. “Our songwriting has gotten more collaborative and more oriented towards keeping each other and an audience engaged,” Hansen adds, “as opposed to, like, getting exactly what each of us wants down.”

“It’s really hard to share songwriting with other people because it’s a really personal, like, sensitive thing,” says Leingang. “Even though people aren’t trying to, like, put down what’s going on when we’re working on a new song, sometimes it can feel that way, you know? Just because everyone’s putting themselves out there. So it’s been, like, a challenge to work around that. But it also has really constructively changed the way that we put songs together.”

Hansen, Leingang, and Seggerman all have different approaches when it comes to presenting new music to their band-mates. “When Dan writes songs,” says Leingang, “they’ll give us an MP3 of a complete song that is completely written and has, like, a beat and a synth part and a bass line. . .” Hansen chimes in: “And then they’ll do it different and better.”

“When I come up with a song,” says Leingang, “I’ll be like, ‘I want this part to be dancey, but like, a sort of dancey where you’re doing this dance move,’”—they act it out—“‘and not this dance move, you know?” “Then I will try very hard to interpret that into a dance move on the drums,” says Seggerman.

“There’s not like a perfect language you can use with music to translate how it exists in your brain,” they continue.

“I’m sure that other bands do have those languages,” says Seggerman. “But I feel like we’re all coming from really different backgrounds.” Hansen began studying classical piano and guitar at a young age while Seggerman began playing drums and joining bands in middle school. Leingang played wind instruments in their high school band before picking up the synthesizer in their freshman year of college. “If we were three jazz nerds, we would be talking about music theory really eloquently,” Seggerman continues. “But instead we just dance at each other.”

The chemistry between the three musicians is palpable both onstage and off. Onstage at the Triple Rock, they fill space in between songs with playful banter and brief explanations of songs they are about to play.

“We try to be authentic and write stuff that, like, we can feel when we’re singing,” says Hansen. “I think just by virtue of us not being straight cis people, that’s our perspective, so our music has that angle.”

“I feel like other publications have concentrated on the fact that it’ll be a male voice singing about male pronouns, and it’s just like revolutionary, so subversive,” says Leingang. “But like Dan was just saying. . . we’re writing from a genuine place. And I feel like our aesthetic is also something that’s kind of queer—”

Leingang says that the band is “a safe place [where] I feel like I’m allowed to explore all these different parts of myself. . . I like to think that our performance is not something that tokenizes queerness. We’re not trying to do it as shtick. I feel like people kind of interpret us as whole individuals.”

“We have a decent number of queer people that like listening to us,” they continue. “I feel like for those individuals, it feels like when [we] get up onstage, we’re the same people we would be at, like, a party at Madame. And it’s. . . something that people can relate to [who] normally don’t get to feel represented when they go watch a band.”

As for the future, B.O.Y.F. is working on their next album, and aims to put out a single this summer through their record label, Modern Radio, a label that has worked with bands such as Motion City Soundtrack and Hollow Boys in the past. B.O.Y.F. is also working out the details of going on tour this summer.

For now, though, the band continues to serve multiple purposes for the three musicians. Leingang says they use the band as both therapy and as a means of social connection. Seggerman adds, “I’ve always said that bands are like way more intimate with me than, like, boyfriends.” Particularly in the songwriting process, being in B.O.Y.F. is “way more intimate than I probably could ever be with like a person,” says Seggerman.

“Yeah, that’s totally true,” says Leingang. “I mean, I feel like this is a sort of. . . It’s a relationship that I’m in, just as much as someone would be, like, married to someone, you know? But instead of, like, having sex once to give birth to a child, you are in this, like, ever-continuing, like, creating. . .”

“Yeah,” says Leingang. “Like a constant state of reproduction with the people that you’re trying to reproduce with.”

As for Hansen, “some of my favorite things to do in music are, like, playing bass and doing harmonies and hollering,” they say, “and I get to do all three of these in this band.”
Seggerman responds, “We’re like, ‘We’re in a relationship and we’re in love…’ Now we know how you [Hansen] really feel.”

“I get bass and screaming and it’s fine with me!” says Leingang. The three laugh.

“No, I mean, I wouldn’t get to do the stuff I do with this band with anybody else,” Hansen continues. “It’s been really liberating on multiple levels. I really like a lot of our new songs and I’m really excited about our next album, and I’m just really happy we’re at the point that we’re at because it’s beyond what I expected starting out.”

B.O.Y.F. will be playing at the Triple Rock Social Club on Thursday, April 16th (tickets available at Song Kick ). You can also find them online at www.boyf.org.